Yes, the day after Easter is a bank holiday making this a big weekend in the UK. Many of the Sacsens were like, "Oh, la-dee-dah, let's go to Wales, Dear! I hear it's so quaint. They even have books now!" So they all pile into their Rolls or Auston Martins or whatever and drive on over to Hay-on-Wye, the Town of Books.

Ha! They don't even know where to park for free.

I apologize profusely to my many English friends and ancestors. But I do know where to park in Hay. I also know where to use the loo without paying 20p. And if you have to pay, put your 20p in the handicapped or gender-free loos because they are much cleaner and actually function.

It was a bittersweet day. It didn't rain too much. It must have rained a lot in the night because the Wye and the Dulas Brook were running wild and brown approaching flood stage. I did buy a few books. I was in no rush. The concentration was on my collection on Wales and I also got a couple on the history of Scotland because I have to do that part of the tour too.

In one of the stores, I looked out the first floor (our second) window and saw Hay Castle!

The same place had an Electric Grandmother near the front door.

After buying a few books and dropping them off in my well-parked car, I wandered away from the bookstores and tried to find remnants of old dwelling places where a poor family like ours would have lived way back 200 years ago.

Then I had my life flash before me as I found a place to walk down to the Dulas Brook. My shoes are great for walking, but not so much for snow or mud. A woman with a dog pretended that she did not see me and I'm glad I didn't have to lie there until the Queen sent out her Home Guard to find me (my daughter's supposed to call Her if she doesn't see a post from me for a day or two.) Fortunately, I have wet wipes in my car which was excellently parked.

I recovered my dignity enough to continue on up the hill on the English side of the Dulas Brook and, of course, found myself in Cusop! 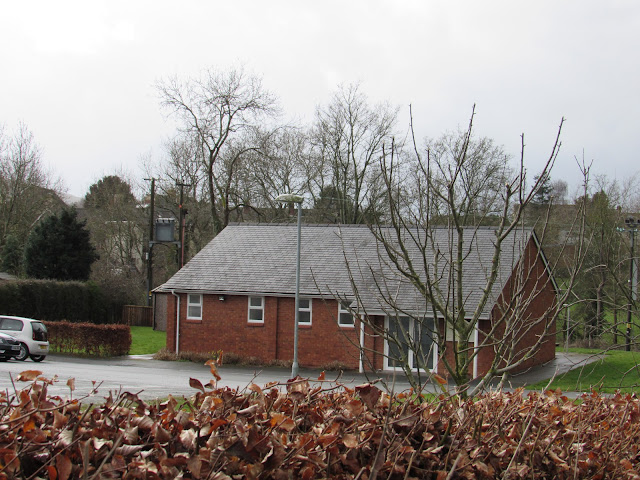 That's the place where I gave my presentation seems like months ago! It really is interesting to find how close together the world is when you start walking around. (And almost die in the mud.)

Remembering I had to get photos of the adverts for the upcoming Hay Festival of Books, I did: 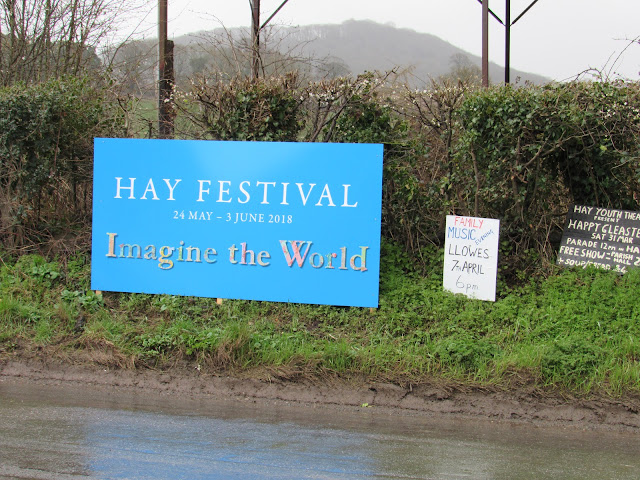 It started to rain harder and I decided it was time to leave . . . .

And there was one more great adventure before coming back to pack.

What I wanted to see was St. Meilig's Cross. The background provided by the church on this was bare-bones, but it is possible that this was a standing stone before it was chiseled into a cross by Celtic Missionaries. And, the greater legend is that this is the stone that the alleged witch and likely nasty person Maud de Braose threw over the Wye River! It was her husband who killed the Welsh Princes at the Christmas Feast in Abergavenny and she was eventually "done in" by none other than King John, who imprisoned her and her son until they starved to death. I KNOW!