Utah, We Love Thee (Whatever You Mean)

Look it up. Nobody can explain the origin of the name "Utah." We think it comes from a Native American word but there are all kinds of theories. It could be Navajo or some variation of Ute or Paiute or Shoshone language. It may even be a Spanish term.

My quandary began when I was working through ancestry.com on some relatives I thought I knew pretty well. There is always something more to learn.

A great historical site not to miss in Bountiful, Utah is the Daniel Wood Family Cemetery. It sits in a rather odd place on 5th West (old 89), just north of McDonalds on 5th South by the Verizon store. It was earlier the south-east corner of Daniel Wood's farm where he had his orchard. Now, I-15 runs through the middle of his farm. 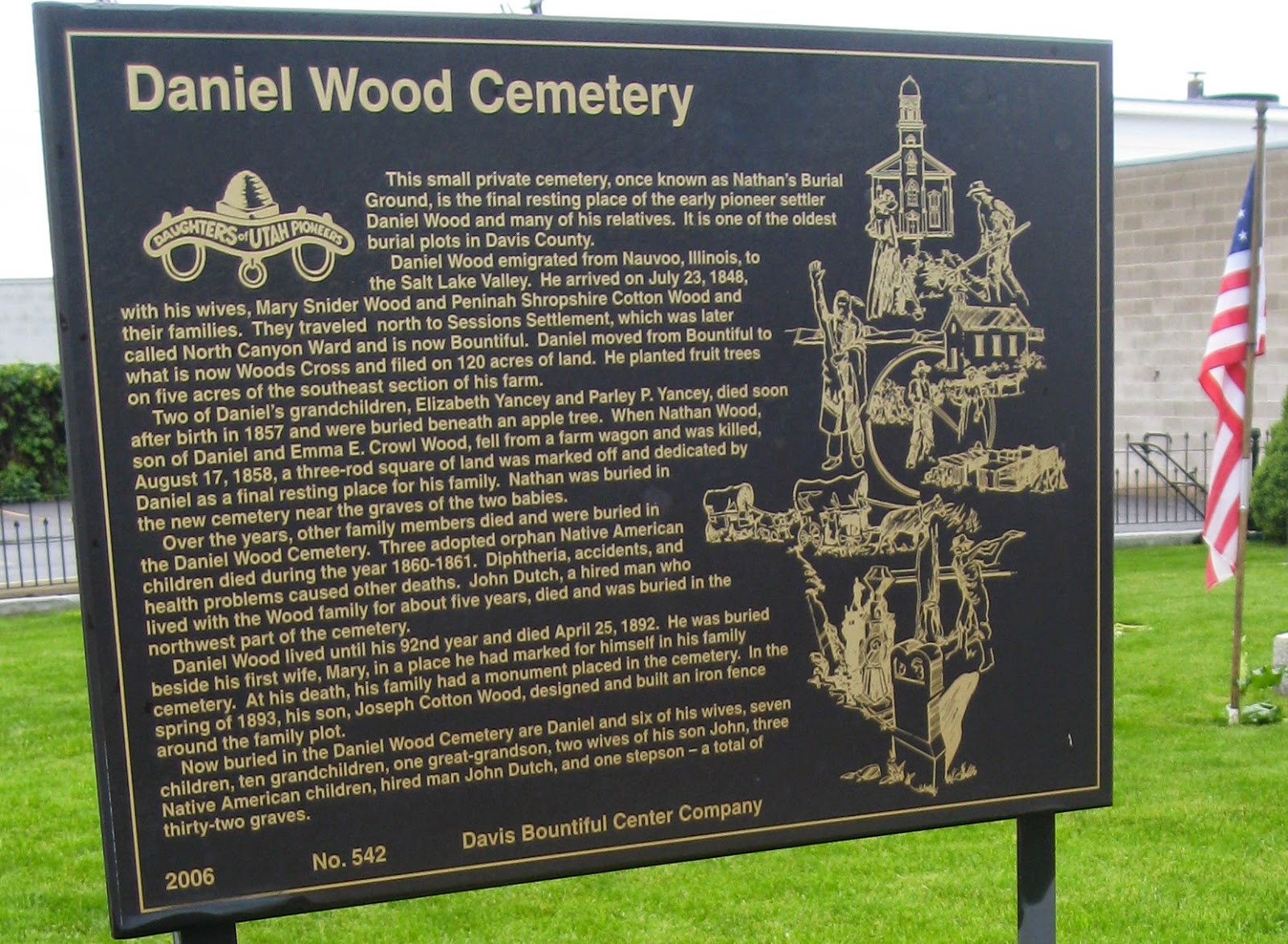 As noted on the DUP marker, there are three Native Americans buried in the family cemetery. They were considered family. They are sealed to Daniel Wood and his second wife Peninah. She cared for them which makes perfect sense because Peninah was part Native American herself.

My quandary came in trying to designate the proper place of birth of the Native children Lucy, Mary, and Thomas. They all went by those Christian names with the name "Utah" as sort of surname, or middle name as adopted Woods. They came into the family in 1849 having been born before the Mormon Pioneers arrived. There was officially no Utah Territory until the Act of 1850. (This was part of the Compromise of 1850). Brigham Young wanted to call the territory (or independent State), "Deseret" for the communal honeybee, but he didn't always get his way with the feds.

As the children were born before the War with Mexico, the land was claimed by Mexico and the Spanish before that. It didn't seem right that I designate their birthplaces as Mexico or even "Upper California." With the exception of the brief visit by Dominguez and Escalante, the Spanish exerted no jurisdiction over the mountain valleys of what is now Utah. If this land belonged to anyone, it was the people we now call the Utes. "Utah" is still right for them. This is what I wrote in my note for Lucy Utah on Ancestry:


With "Utah" in her name, she may have been considered a Ute Indian. There were children adopted by Mormon Families after the skirmish at Battle Creek, Utah Valley (now Pleasant Grove). The battle occurred on 5 March 1849. The Utes were surrounded while sleeping by Mormon Militia. Awake, they found themselves trapped. Negotiations to have the Utes surrender failed and the Ute men were killed. Women and children were taken to Salt Lake City and cared for. Most of them left to find relatives. Some children were adopted. They could have been orphans or Paiute or even Mexican slaves.

I have an additional theory. While visiting at Santa Barbara Mission, California last Fall, I purchased a poster of a 1848 Fremont Map of the Western lands that became part of the United States through the Treaty of Guadalupe Hidalgo and a Treaty with Great Britain for the Pacific Northwest (even if I still would have liked to have it up to 54'40). 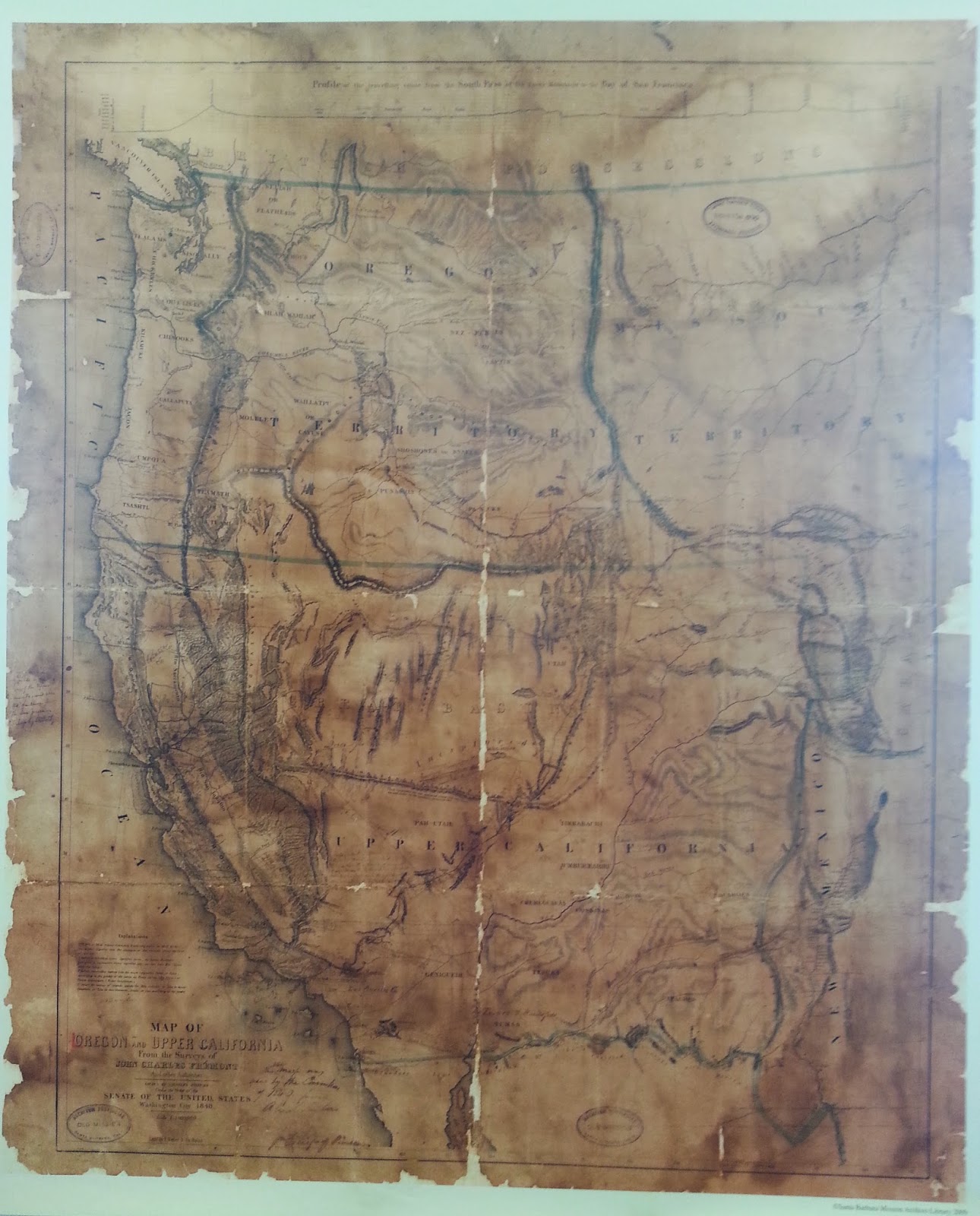 If you zoom in just south of the Great Salt Lake with its "Mormon Settlements" noted along the east shore below the mountains, you will see "UTAH." The print-type is the same as the names for other Native Peoples throughout the West. Fremont didn't get a lot of the the native names right along with his imaginary mountain ranges, but Congress had this official US Map and it only seemed logical to name the area "Utah."

Utah is the right place for the birth of Mary, Lucy, and Thomas Utah.
at 11:43 PM