My boss called me in today. He's a really good guy. He tried so hard to soften the message. "Well, I, uh, -sit down. I regret this, but I need to let you know that, well, you have been officially designated as 'non-essential.'"

My response: "Ha! No problem! I've been 'non-essential' for 30 years! I was shutdown by Reagan and Tip O'Neill!" He is too, of course.

We also found out, and I'm not supposed to say much about this, but certain persons, while still "non-essential," are paid out of different sources of funds. And as their salaries are already paid, they have to work. Of course that also means they will have no worries about being paid. When we get furloughed, we are legally prohibited from performing any work. And we have no expectation of being paid.

In every shutdown over the past 30 years, and there's been about a half dozen including the infamous newt shutdown which gave Pres. Clinton far too much free time, Congress has retroactively paid our salaries. I guess that's sort of guilt money because they get paid a lot for not working. They only work really, really hard at these times when they kick us out. Go figure. But with this Congress, all bets are off.

Sen. Bob Corker (R. Arkansas) chided Cruz & Lee on the Senate Floor for delaying a vote until Friday so they could meet the television schedule they had promised their followers.

The President today held firm that he will not negotiate on the CR (Continuing Resolution) to fund the government (not a real appropriations bill, mind you) or on the debt ceiling authority.

The House indicated that they want the Reid-cleansed CR back to them so they can add other stuff they want.

[I didn't finish my thought - the President and Senator Reid (bless him!) insist on a clean CR and a clean debt ceiling clearance. They can't allow any concession on the CR or they will face worse when the Republicans come back with more demands for the debt limit. The President could then give in on Obamacare delays. Heck, he's already done some himself! But he can't do that now. So - guaranteed shutdown - the lesser of two evils. I hold supporters of the tea party responsible. And mostly, Cruz & Lee, even if Cruz is stealing all of Lee's "glory."]

There may not be a shutdown if Boehner succeeds in pulling one over on his tea party caucus by getting a clean CR for a week or so to allow them to keep fighting. But it was a succession of those that led to the infamous newt shutdown.

Oh, and this just in. There is a wonderful new tumblr and FB page from Adorable Care Act. The White House denies any involvement. Rep. Issa is sure to conduct an investigation. 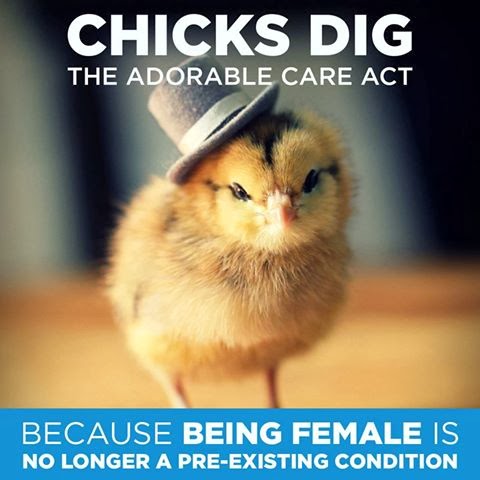 Go to
Shutdown Update No. 2