Let my start by stating that I am an American Citizen of legal residence in the State of Utah. That makes you one of my two U.S. Senators even though I did not vote for you. But I am your constituent and I write this to offer a little advice.

I understand that you had a little talking-to from your Minority Leader today. It's really too bad you didn't pay more attention to my blog, or your old Home Teacher - Brother Reid, or even your Dad. I knew your Dad. I realize that you must have known him much better. And I can't understand how you came away from such a good man and a conservative of solid credentials to promote the ideas about government and the U.S. Constitution that you do. 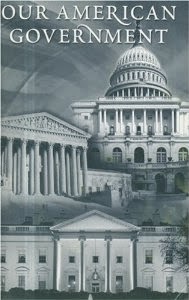 There is help that I offer in the form of a publication that one of Senator Hatch's Aides gave me up there on the 8th Floor of the Federal Building in SLC. I went to get some of those copies of the U.S. Constitution that Senators give away so I could pass them out to Boy Scouts working on their First Class Badge. I used to go down to Senator Bennett's office because I liked him best of all, but he seems to be gone. You can also get the book on-line at this place you can click at. Anyway, the booklet is called "Our American Government." Here's a picture in case you haven't seen it:

It's a really cool guide to the U.S. Constitution and our wonderful system of Government. It was printed by the Government Printing Office and produced by a Concurrent Resolution of the One Hundred Eighth Congress of the United States of America. H. Con. Res. 108-139 (so you can have a staffer look it up to check!) That was the Congress elected in 2002 right when President Bush was rallying us all for our patriotic fight in Iraq! Those guys (and a few gals) must have been real patriots! I mean, even the President said that those who weren't with us were against us so I know the Congress went along with him!

Anyway, there's some really good stuff in there about how our Government works with three branches, checks & balances, and all the stuff about how to make laws! That part might really be good since you're now one of those guys with that job!

I really like how it explains things in basic terms so that the people can understand - and I suppose the Senators too. For instance, here's a great question and answer right from the start!


What is the purpose of the U.S. Government?

The purpose is expressed in the preamble to the Constitution: "We the People of the United States, in Order to form a more perfect Union, establish Justice, insure domestic Tranquility, provide for the common defense, promote the general Welfare, and secure the Blessings of Liberty to ourselves and our Posterity, do ordain and establish this Constitution for the United States of America."

Wow! That's really cool! We really ought to have a Government like that! I hope you can help make some laws so that we can have some of those things to become "a more perfect Union!" And it's kind of funny, but I didn't see anything in there about the purpose being to cut taxes for the rich, keep Mexicans out, establish Christianity, avoid regulating our businesses, stop paying our debts, never raising taxes, limiting government, and never helping make sure that people had health insurance in case they get really sick or hurt! I mean, there's all that "general Welfare" you're supposed to promote, capital "W" and all!

The booklet is really good because it says that all of us have responsibilities. Question No. 2 is:


What is the role of the citizen in our Government?

The United States today is even more of a participatory democracy than was envisioned by the Founders when they established a government "of the people, by the people, and for the people," as President Lincoln later described it. Along with the constitutional responsibilities which accompany citizenship, such as obeying laws and paying taxes, the citizen is afforded a wide range of rights and opportunities to influence the making of public policy by the Government.

Wow, again! I'm so relieved because I was getting the idea from some that "government is the problem" and that taxes are always evil! Some tell me that the people don't have a say anymore because it's all about campaign contributions and political favors to rich people - and fighting everything evil that is so easily summed up in the word, "socialism." Oooo! That just scares me!

There's a lot more good stuff in the booklet which seems to be pretty much everything I believe about what our government and Constitution should be! And that's really good because I hear there are people in D.C. who try to scare us about things - icky things that all can be described as "socialism." Oooo! I don't think it's right to encourage people to be scared because our President is kinda different from all the others and because he takes Republican ideas and tries to make them work - like that really cool one about health insurance from Governor Romney and the Heritage Foundation!

I like it best when we're not afraid and can stand up for what we believe so we can learn how to work it out with others who sometimes believe different things. I really like how President Lincoln did that sort of thing. And so did the guys in the Constitutional Convention. They had all kinds of different ideas! Maybe that's why they found some common ideas to get our Constitution going and they even wrote in that part about making it "a more perfect Union" because they knew they hadn't solved all the problems!

I hear there are some people in the Congress today who think they have all the answers and want everybody to do things their way or they will make everything stop working. Stay away from those guys!! They'd be really bad friends to start out with.

What I think you ought to do is listen to as many different ideas that you can from the people in Utah, and all the other Senators (although maybe not the ones from Texas! I don't think those guys know what's going on at all!) Some of the loudest people in Utah may sound like they are a big crowd, but they're really not. Every person has value and I think you should hear a lot of them to come to some kind of balance with all the different things they like and don't like just as those guys in Philadelphia did.

Good luck back there! Stay out of trouble!

Your Constituent and Citizen of these great United States,