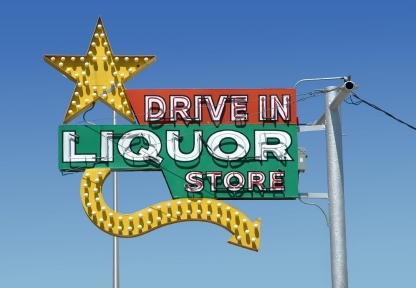 Booze doesn't kill, people who drink too much and drive kill. I think that's pretty obvious.

Let me tell you a little story. Back in the 1990s we lived in New Mexico. A political issue arose about drive-up liquor stores. As an odd side note, the campaign to close drive-up liquor informed that there were only four states in the U.S. that still allowed unrestricted drive-up liquor sales.* I realized that I had lived in three of the four! Wyoming, Maryland, and New Mexico! The fourth was Louisiana.

Now, I'm smart enough to understand that drive-up liquor is not a direct cause of drunk driving. You still need a human actor to make a bad choice to drive while intoxicated instead of just using the car for the sober convenience of purchasing booze without getting out of the car.

Here's the thing. The math is also pretty simple in the back or even front of anyone's subconscious:

Regardless of any statistical analysis or actual cause and effect, it was the cultural message that the opponents were attempting to drive home (safely - sorry).

It was in my lifetime that a cultural shift took place. I don't think it was until the late 70s or 80s that Mothers Against Drunk Driving (MADD) got going. (And I appear to be right on as the MADD website gives September 5, 1980 as their beginning.) No one could argue with the mother of a child killed by a drunk driver.

MADD was successful with its message. Instead of being "funny" as you can still see in some old movies, drunk drivers were declared a menace to society. The designated-driver concept came into being. As a teetotaler myself, I ended up in that role a few times. (The most interesting time was with a bunch of drunk, Army civilian employees at a training in the Bay Area. They had the rental car to go into the city. I was designated driver. "LeS's gooooo dOwn thaht LoMbaRd Stahreehuht aGAin!" OK, maybe they were a little funny--as long as they weren't driving.)

Society took a turn for the better. It was no longer socially acceptable to drink and drive. Legislatures raised drinking ages. Alcohol/blood levels were lowered. Cities and other community organizations implemented programs to call a free taxi on big-drinking holiday nights. Responsible drinking establishments posted signs about designated drivers and supported community taxi services. Even the beer and stronger-drink companies started the sometimes odd notices on advertisements about "please drink responsibly."

There are still too many deaths caused by drunk drivers. The trend did go down significantly after 1982 even if there were other demographic factors that may have influenced this drop as indicated in this US National Highway & Transportation Safety Agency analysis. But no one can argue there has been a societal change placing more responsibility on individual choice with regards to drinking and driving.

Gun people- that is all I am asking. I don't want to take away your guns and no law will prevent crazy people from committing mass murder. But society needs to change from the philosophy that guns are mere tools for problem solving. Crazy people along with spouse abusers get that message and we see the tragic results. Guns are made to cause damage to living flesh. Alcohol and cars only result in that as an unfortunate consequence of their main purposes. Please help change society to make us all more responsible and as we also care for the mentally disturbed. Here's my new equation:

__________________
*Since the repeal of Prohibition, states set there own liquor laws and they vary widely. A 2012 article from USA Today states: "There are no precise numbers on how many states allow the practice, as it is usually left to individual municipalities."
at 9:28 PM