Unaware of any other name for my waterfall, I get to name it.

I went up there again yesterday evening. It wasn’t 103 degrees as it had been for the previous few days. Just around 90 and a little overcast, I thought it would be cool enough in Centerville Canyon along Deuel Creek. It was very pleasant once I got past the downsides of a lot of sweat and a few deer flies (only bit twice). I saw a snake, but it was only a garter. And the poison ivy is starting to spring up, but easily avoided watching carefully where you plant your feet. I was doing that anyway because it is a rough, primitive trail.

There was a guy coming out of the canyon mouth as I was going in. And there was a family group just coming in as I was going out later. On most of the trail it was just me and the thimbleberries – and eventually, the waterfall. I have never seen another soul up there except for the Scouts I have taken up on a couple of occasions. When I have been alone, I was alone.


It was good to see the berries all ripe and full as it indicated that no bear had been browsing. I recognized them as edible as they look so much like the salmonberries of western Washington State. The leaves look a lot alike. The berries are just bright red instead of salmon colored. And I had tried them before without dying so I thought I would be OK. I confirmed later on the internet that they are all related species along with raspberries and blackberries. It was the raspberry taste they most resembled. Thimbleberries are supposed to be tart, but these were as sweet as could be.

I didn’t carry water with me again as I like to have my hands free for any tripping or slipping. And I could always have grabbed a stick to poke an attacking cougar in the eyes. There was none of that, but many berries to grab with increasing delight as I went up the trail. They provided a little moisture to the mouth and a lot of fresh sweetness. I probably got some good electrolytes and some great anti-oxidants. It was a piece of paradise.

I love the escape of trail running. It is literally running away from my cares as I head higher up the canyon. While moving, I still have to pay close attention to the trail to prevent that tripping and slipping thing. So I don’t go real fast, but much faster than hiking with a backpack. At the top, I am completely free and relieved from the burdens of the world. It’s only for a few minutes as time starts to creep up on me and I feel an obligation to head back down – so much easier and cooler especially after splashing in the falls.

And it is a real waterfall up there as opposed to what I would call a mere cascade at the mouth of the canyon. The water literally falls and even in this dry year, there is enough head to shoot out of the rock groove creating a canopy under the flying water below. I finally found a picture on the internet along with a few more trail descriptions (here, and here). As much as I hate to promote my special place, it would be fun to share. I was thinking of my wife up there.

And to get this back on a political track, maybe one of the things I was actually glad to escape from up there at Thimbleberry Falls, neither I nor Romney drink beer so that test of whom I would like to sit down and have a beer with doesn’t work at all. But if I could take one of those guys up there on the trail, they are both fit enough that they would make it without any trouble. I just think I would enjoy it more with the President. Probably just personal preference based on my politics, but he seems a little looser and more easy-going than the former Governor. Romney gives me the impression he would be a little annoying like some of the Boy Scouts I’ve known. But I guess either of them would have enough Secret Service escort to take care of the bears or cougars -- if they could keep up.

Addendum
July 14,2012
And this from the Farmington Parade today: 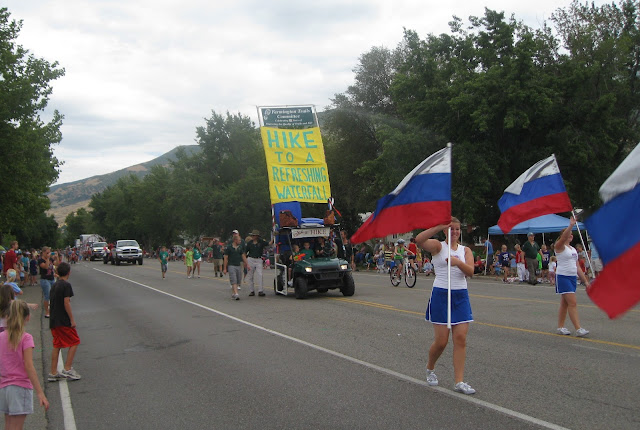