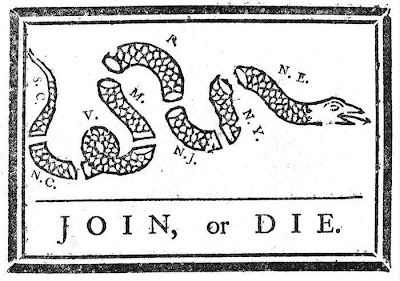 The tea party crowd adopted a Revolutionary War symbol of the yellow flag with the snake and slogan "Don't tread on me." The new meaning seems to be an individualistic, anti-government sentiment if I understand them correctly. It reminds me of an earlier snake image in American History attributed to Benjamin Franklin. This snake says "Join, or Die" - also a revolutionary sentiment, but tied to the dream of American Union proposed by Franklin as early as the 1750s.

Even the snake on the yellow flag poses no threat unless there its a united effort to revolutionize. The tea party minority crowd has bared its fangs and left us wanting. I would hope that we understand and promote Franklin's ideal of unity and that we're all in this together - We the PEOPLE of the UNITED States of America (certainly not, "We the people of the united STATES of America") Lincoln sort of got that point across that we are now losing with resurgent states' rights and the glory of individual materialism opposed to the common good of a united people. We are in this together.

That snake we built, no one did it on their own. It was a joint effort of We the People - all the People. We are our own rulers, but only if we actually self-govern. That only works as we work together. Join, or we die individually, one by one. Like Ben said.
at 10:30 PM