Scouting the East Fork of the Bear 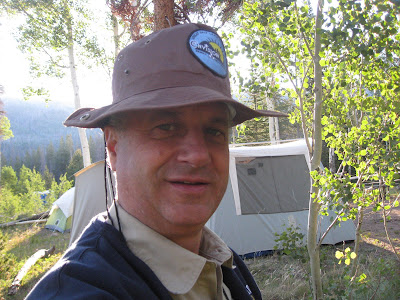 Here I am on another Scouting adventure. I really have to keep working on my attitude. I understand and respect the aims of Scouting in building character and citizenship in young men and even young women (outside the LDS Church sponsored units). I just find myself at odds so often with Scouting in its application among failed human beings as we all are. There are some really good people in Scouting, but too often it tends to involve odd characters – and a few of them are seriously overweight or lacking in social skills – or both. (Now I’m in trouble.) Maybe that’s probably just a reflection on modern U.S. society in general.

And I wish they would just get over the gay thing. Do like the LDS Church, at least, and acknowledge same-sex attraction as a reality. As long as behavioral standards are kept, and Scouting is pretty strict these days with Youth Protection programs (protecting from abuse by heterosexuals), I don’t see why there should be a problem. Sure, a little cultural adjustment will be required. The program is pretty strong these days in anti-bullying and anti-hazing (with some room for improvement), And they did it with racial integration. So, once again, it’s heading in the right direction just with a ways still to go.


Anyway, here we are at the East Fork of the Bear Scout Reservation at Camp Evergreen for Envision – Family Camp and Woodbadge adult leader training combined. There is still a tension in this council with Envision as to whether it’s in support of Woodbadge (which some tend to see almost as a cultish culture), or is valid in its own right as a family camp program sponsored by BSA. This is still only the second year in this council so the kinks in the system are still being unkinked.

Back to the positives – this is a beautiful place. The mountain slopes burned some years go by negligent Scouts for which the BSA and LDS Church paid dearly in settlement are coming back in greenness. It’s still amazing to me that the fire managed to burn the slopes on both side of the valley, but most of the camp areas themselves somehow survived and we still have greenery and nice camp facilities (well, in relative Scout-camp terms). And it’s a relief to be under fire restrictions this year – no open flames, no campfires, no charcoal – all cooking to be done on propane stoves (let’s just hope one of them doesn’t blow up!)

In this drought year, the East Fork of the Bear itself is just a trickle of its usual strength. The contrast with last year’s raging torrent is striking. Yet, we are camped near a small tributary stream that is rushing downhill with all the melody required to bring peace to the soul and help us sleep at night.

My wife is heavily engaged in Scouting these days. It came about through natural and positive means as she is a very talented and hard-working person who becomes very dedicated to causes. Sometimes, I selfishly resent it when those causes are not me.

When we ended up with enough kids that day-care support of her teaching job was rather economically pointless, she gave up teaching for pay to be a stay-at-home-mom who didn’t stay at home that much as she was constantly out in the community engaged in volunteer efforts in support of her children. There was PTA, then music lessons and band support. There was church service, of course. And then she went with our oldest son to Cub Scout Day Camp. As she explains, the program was seriously lacking in quality. “Any fool could do better than this,” she thought. And then she offered to help the next year, they took her on and it’s been an interesting ride ever since. Her talents were particularly suited to running excellent Scouting programs. The professionals and volunteer leaders in Scouting were no fools either and picked up on this so she was asked to do more and more in running camps and then teaching others to run camps. She has excelled in participating and conducting National Camp School for BSA and as an instructor, now eight years going, at the Valhalla of Scouting, the National Training Center for BSA at Philmont Scout Ranch, Cimarron, New Mexico. There’s heaven for you. I’ve been a few times and I know.

So there you have it. Yet there’s more. Treading a little carefully here, I have already explained that I had great Scouting experiences myself as a youth due in part to the fact that my dad was a professional executive with BSA. As a result of perfectly normal family tensions and my natural teenage rebellion from which I have mostly recovered, I reacted rather poorly when my spouse became so involved in Scouting. The green little imp in my head would say, “You lost you dad to Scouting, you don’t want to lose your wife, too!” I really worked hard to get over it, and have, for the most part.

When she began running Cub Scout Day Camps, I was hesitant about having much to do with it. But in support of her, I took vacations days from work to help watch our younger kids. The annual loading of the other leader’s recreational vehicle was challenging. Those people were a little odd (the social skills thing, etc.) I just couldn’t face going up to camp until I overcame some of my internal issues.

After a couple of years I thought I really ought to go up there. Taking a long lunch from work (no child care duties that day), I drove up the mountain, just a few miles on the slopes of the Sangre de Cristo, and visited the camp. It was a wonderful operation as I had expected. And the camp volunteers were so grateful to my wife and so very kind and respectful to me as they assumed some of her goodness must have rubbed off on me. Maybe it had.

The next year, her archery person needed a sub for a day so I volunteered. I actually enjoyed it. Especially as I concentrated on the basics – safety, of course – but also how to simply hold the bow and nock an arrow which had been so frustratingly difficult to me when I was a child. Then, the next few years, I took a whole week of vacation to help with the archery. By then we had older children who helped staff the camp as well. I had a couple of my boys work with me as assistants at the archery range. Archery was great too because I was in charge of that area and with the safety concerns, I had to stay there and didn’t have to deal with the rest of the camp at all. I banned one kid from the range who was tossing arrows by hand then welcomed him back later that week as we used his experience as an object lesson. There was a great joy the day I added balloons to the targets. I could hear the kids arriving in their leaders’ SUV, windows down, as they passed the archery range, “Balloons! They have balloons to shoot!” Balloons have that magical effect on children of all ages.

So, here I am at family camp getting ready to run the archery range. I’m no crack shot, but I can teach them how to hold a bow and nock an arrow. And I have balloons. Character will follow.
at 5:55 PM