My mom gave me a treasured heirloom - a 19th Century LDS Hymnal. It has little if any collector's value as it is separated from its binding and missing a few pages. It is treasured because it has the apparent signature of one of my pioneer ancestors. 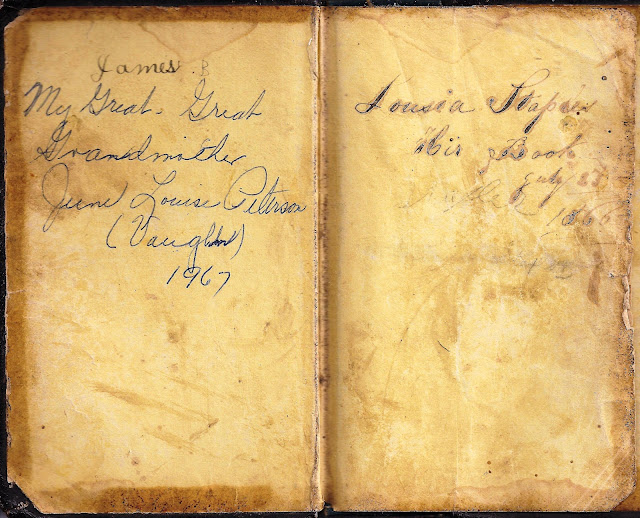 
James appears on the list for the Edwart T. Mumford Company, 1868, just barely qualifying for Mormon Pioneer status before the Union Pacific Railroad was completed in 1869. As it was, this company was able to take the train to Benton, Wyoming, and took the wagons from there coming into the Valley down the Parley's Canyon Road arriving September 24, 1868. Benton is located at eleven miles east of present day Rawlins (UP milepost 6 72.1). The town had a very brief existence of three months as the end of the rail line from July to September, 1868. According to this Wyoming ghost town website, 2,000 Saints in five companies headed off to Utah from there. And General Grant. made a visit. Maybe James saw him. The Mumford Company left Benton for Utah on September 1, 1868 taking 23 days to arrive. (Rawlins to Salt Lake City is now about a 4 1/2 hour drive - a little longer if you stop at Little America for ice cream cones).

Louisa Field Staples, who died in Morgan, Utah, April 1870, must have come later on the train in 1869 or possibly early 1870. Richard Staples died 22 August 1868 and is buried in England. There are numerous, conflicting locations for his burial in new.familysearch.org. I will have to do some more research. But we did visit the village of Redmarley D'Abitot, Gloucestershire on our trip to England two years ago where the Staples Family has its origins. According to the Deseret Evening News of 3 August 1868 found at the Mormon Pioneer Overland Travel database on LDS.org (a wealth of information!) James would have been waiting at Benton when his father died in England.

Louisa apparently owned this hymnal before her son James's name was written in it. The date by Louisa's name is July 17, 1866, indicating that the book was in England, possibly printed there. There is no date by James's name. Could it be that he carried this with him to Utah in 1868?


My mom, of course, couldn't resist signing and dating it a hundred years later. She certainly wanted to note that her middle name is the same as her Great-Great-Grandmother's. But even that could be valuable to my Great-Great-Grandchildren. Come, come, ye Saints. 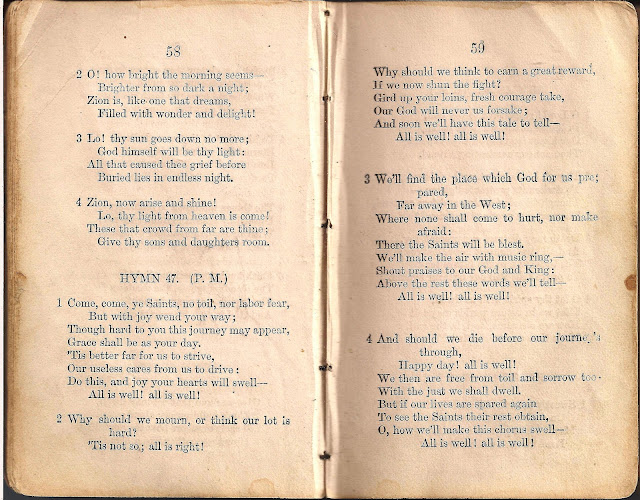 ADDENDUM
Later, Pioneer Day, 2012
I just had to do some more checking.

According to the The New York Times of July 28, 1868, General Grant left Benton on July 27 "for the end of the track of the Pacific Railroad." I haven't determined yet when he left for the East, presumably on the train from Benton. We do know that the Mumford Company with James Staples left for Utah on September 1. Mumford states in a 11 September 1868 letter to Brigham Young that they were "detained nearly nine weeks at Benton." It would seem to me that if you were sitting around Benton, Wyoming for a few weeks waiting for your wagon train to leave, you might notice if General Ulysses S. Grant, Civil War Hero, and candidate for President, came through town. I'm pretty sure James Staples, a teenage boy from England, would have been interested enough to take a gander.

ADDENDUM
February 26, 2013
While missing the title page and publication information, this appears to be the 12th edition of the Manchester Hymnal, compiled by George Q. Cannon (Liverpool, England 1863) - Identifiable because it has 331 hymns, the only match is with the 1863 edition. Source: http://en.wikipedia.org/wiki/The_Church_of_Jesus_Christ_of_Latter-day_Saints_hymns#Manchester_hymnal (accessed Feb. 26, 2013) and led there by http://www.losthymnsproject.com/indexa.htm from a comment by Mark B. on  Mormons in New York History.by Kent Larson. 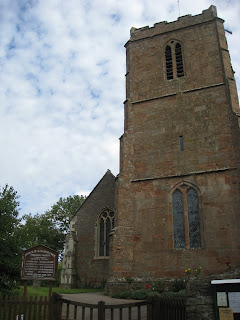 I think this deserves a couple of photos of our visit to the Staples's ancestral home of Redmarley D'Abitot, Gloucestershire.  This was just a few miles from the historic Gadfield Elm Chapel, one of the oldest LDS Chapels, formerly of the United Brethren (Wildford Woodruff, etc.) The mystery remaining, as the Gadfield Elm LDS Congregation had moved on to the U.S. in the 1840s, was there any connection with the Staples in nearby Redmarley D'Abitot when they didn't join the church until 1850? And the LDS Church sold the Gadfield Elm Chapel in 1842? Where did the Staples go to church? Guess I have to get in to the CHL.

And to prove I was at Gadfield Elm: