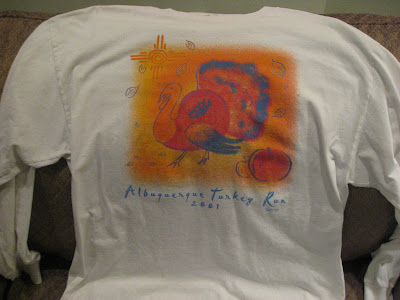 The first race happened almost by accident.  I have a good friend in my wife’s sister's husband who very occasionally posts here as AnonymousD. They went down to Albuquerque for Thanksgiving in 2001 and Doug is a runner. He had recently gotten back into it and I recalled that the year before his wife, Doug and my father-in-law went down to a run on Thanksgiving morning. I thought that I might join them this time.  They got such nifty tee shirts. My plan was to join the walk that my sister-in-law went on because I was down on running with my knee problem. However, when they told me the walk was only two miles, I thought that was not much of a challenge as my walks were generally 3 to four miles. The other options were the five and ten kilometer races. Doug was going to compete in the 5-K and then run the 10-K just for the fun of it. I decided to take the challenge of the 5-K - just 3.1 miles.

Up early that morning, I waited for Doug and my sister-in-law's van to turn into the driveway. My father-in-law went with us too, as did the youngest of Doug's three girls. We had to get down to Kit Carson Park down by the Rio Grande and the Zoo because I hadn’t pre-registered and had to pay the higher registration fee to get my “free” tee shirt. We got to the crowded park and my sister-in-law let Doug and me out to get to the registration table. I filled out the form, paid and got a number to pin on me – 828 in big red block letters. An auspicious number with 2 always lucky for me and double 8’s, surely with some great portent. However, they were out of nifty tee shirts and told me I would have to pick it up at Gil’s shop when they got a shipment in. Gil is the little guy with the running store down on San Mateo that was apparently sponsoring the event.

As the 5-K was the first event of the morning, I ran to the port-a-potty and then to the massing crowd at the starting line. By that time I had lost Doug as well as the rest who went to park the van. So, there was no one who could hold my wallet that I had brought because I had to pay the late registration. I also planned to leave my jacket and sweat pants as I had my shorts underneath and it was pretty warm for late November. I panicked a bit wondering what I had gotten myself into and seeing no friendly faces in the crowd. With the start time rapidly approaching, I hung my jacket on the fence, stumbled out of my sweats, taking off my Nikes and relacing them in the process of hanging the sweats on the fence, and then, greatly relieved to remember I had pockets in my shorts, stuffed in my wallet and mingled into the start crowd. I had just enough time to stretch my thighs with a quick lean to both sides and then pull my feet up one by one behind my rear to stretch the hamstrings. Then we were off.

The plan was simply to finish. So, I thought it best to hang back and let the serious runners go ahead.  There were lots of people around me of all different shapes and types, young and old, male and female. Most seemed to know what they were doing but some were clearly first-timers. How they perceived me I have no idea but I tried to look like a runner. The push of the crowded field forced me faster than what I was used to and I had given up on running some weeks back in concern over my knee. But the stationary bike had cross-trained me well.

It felt good as we rounded the first corner off the park and into the nice country club neighborhood of older, established Albuquerque homes. I saw a marker at one mile and looked at my watch to be very surprised that my time was about ten minutes. By this time the crowd had thinned considerably and I could note the people around me better. Some were together in groups chatting along. My male pride was wounded ever so slightly whenever a female passed me, especially the older females. One short little round guy went past which didn’t bother me as I figured I’d see him again. I did.

There were no more distance markers after the first mile or at least I didn’t see any and I started to get winded. My thighs were also telling me I was in a race, something they had never expected of me. But I kept them going. We circled back through the residential area and on to a roadway along the Rio Grande Bosque. There was a police cruiser stopping traffic on the road that runs along the canal. I waved at the officer.  hat’s part of the ethic of running, that everyone is a friend out on the pavement.   I can’t help but wonder that it’s also an important check on each other to indicate that everything is OK, that I’m not dying of a heart attack or out beyond my physical or mental limit. I can still run and wave at the same time.

I had long ago left that short round guy behind, now I was coming up on a father and his girl of about ten or eleven years. I thought I had to pass them but they kept on ahead of me. Then, miracle of miracles, the girl and dad stopped to fix something with her shoe. That let me go on past. But I was really tired now. I saw other runners coming back so I knew there had to be a turn around ahead but I could not yet see it. Across the canal from us was the backside of the Zoo exhibits. We turned a long, slow turn to the left and there it was, the turn-around point. I thought it would be no shame to make it there and then walk back. The old self-psych-out, get to the next landmark, then the next, and the next . . ..  Then I saw Doug coming back. That encouraged me. On and on I finally made that turn.

OK, I had made it to the turn once, now I could make it back the other way and that would be about the end of the race. I knew I couldn’t quite see it because of the curve but I could follow along the zoo buildings backwards that I had passed on the way out. Now the crowd was really thin and there wasn’t much passing of each other. Each one of us plodded along in our destined race position. It still went on. I came to the curve. The police cruiser was ahead and the route turned off the bosque path to the edge of the park, around the corner and the finish at the start. I could actually make it.

Then Doug came up and gave the greatest boost of all to run back the rest of the way with me. He complimented my progress without the least bit of patronizing. It was good to have his companionship as we rounded that turn at the cruiser, down the short hill to the park and around the corner to the left and the finish line. I ran through the chute and they noted my number and the time on the big, red lighted sign. 32:15 – finishing 235 in the field of about 300.

I was very happy, found my jacket and sweats I’d left hanging on the chain link fence and then ran into my sister- and dad-in-law. They had been watching for me in the gray sweat pants and didn’t know I’d gone in my navy shorts so they didn’t see me come in. I walked around a little to cool off and decided to join them pushing my little niece in the stroller for the two mile walk that was forming up behind those doing the 6-K to start at the same time. Doug ran the 6-K but just for fun, not for time. After the walk, I ran up to meet him as he came up by the police cruiser at the last turn. We stuck around for the prize drawings and didn’t win any turkeys. But I still won big that day.

That afternoon I ate the best Thanksgiving dinner ever. I had a wonderful piece of pecan pie a-la-mode. I earned it, I deserved it, I loved it.