That was a favorite phrase of my maternal Grandpa who worked his boys hard, and occasionally his grandsons. He taught me how to set irrigation pipe. He enjoyed that too, because as a city boy, I had to learn the tricky part of the flipping my thumb in one end of the pipe to create suction while pumping the other end in the ditch before dropping it into the irrigation row. When that goes wrong, you get squirted with dirty irrigation water. Grandpa would laugh and I enjoyed it too. I did learn to do it smoothly without the squirting.

Actually, I was more along for the ride. Out with him in the pick-up with the clutch (that I got to drive sometimes), I was fascinated to hear Grandpa's farm talk. While I haven't heard any sailor language, I can only imagine it was somewhat similar to what I heard on the farm. Some years later, I happened to mention it to my mom and I was surprised at her surprise that his farm talk was not at all the same as his home or church talk. I am capable of a few less than choice words when working home projects (especially plumbing).

We don't have a farm with all those chores to be done. And to irrigate the garden or the yard, we just have to set the automatic sprinklers. I still try to teach my boys the value of work. I'm kind of lazy about it though because sometimes its easier just to do it myself. I also tend to overpay for work on the lawn (mainly because I don't want to do it). But it's a good way to spread around the family resources because they don't get allowance. We do pay for an awful lot of music lessons, school activities and occasionally, simple entertainment. They do get part-time jobs to help support their teen lifestyles.

This morning, blessed with bright, sunny and fairly warm weather, I went out to finish taking down the Christmas lights. The boys came out one by one roused from their beds by their mom. My wife started cleaning the garage so I made sure I kept busy doing other things. The greatest blessing was to get my seventeen-year-old going on the shed roof. He helped out in a lot of summer service activities in the neighborhood replacing some roofs. That has become somewhat of a common community project in our LDS Ward. I'm not good on roofs, so I usually helped gathering the old shingles from the ground.

My boys are good boys. When they all leave home, my grandsons should be old enough to start mowing the lawn. I think I will really overpay them. And we're getting Papa Murphy pizza tonight. 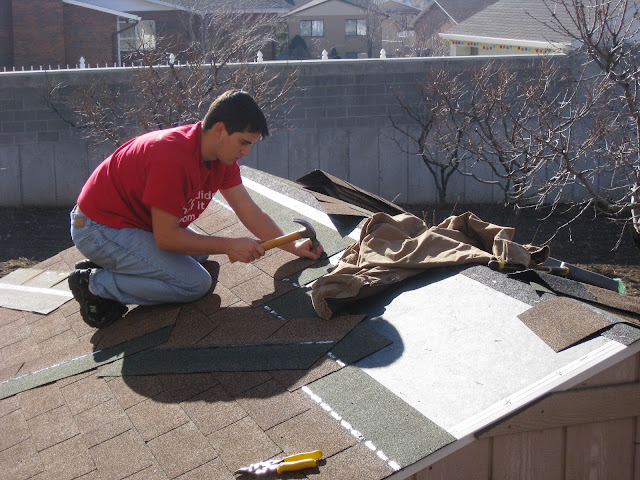