Crushing the Aristocracy of Corporations - The Jeffersonian/Rooseveltian Way 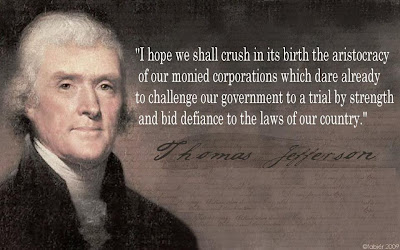 I did find reliable provenance in a letter of Jefferson to George Logan, November 12, 1816.

It reminds me that I have taken on corporations now and then and even had a few wins in the tradition of Jeffersonian ideals. I can talk a little about one case because it is now a matter of public record, United States v. Carlwood Development, Inc., 177 IBLA 119 (2009). This was a mining contest challenging a guy who had set up a bunch of  dummy corporations to control more claims for land than he would otherwise be entitled under the Mining Law. He had a whole valley tied up, about 65 square miles. Thanks to some good sleuthing on the part of BLM Mineral Examiners in the corporate records of Nevada along with other states, we exposed the scheme. Oh, and our law enforcement guy found the lady with the original, handwritten agreement setting out the scheme that she sent through a satellite link during a Wyoming snowstorm towards the end of the hearing. (This case really should be made into a movie.)

The Board's decision is used by the BLM National Training Center as the definitive case on the standard to establish dummy locators. It's nice to have my name on it, but it was the Administrative Law Judge (ALJ) who decided to "go big" on writing the treatise. He got most of his stuff from us, though.

However, fame is fleeting. I just heard from our minerals attorneys in DC that they got a rider into the Department's appropriations (that big omnibus bill that passed not too long ago) to authorize BLM to charge the same mining claim fees for association claims as they do for individual claims knocking out most of the economic incentive for someone to set up dummy locators.

But it is nice to win one over the "aristocracy of monied corporations" AKA "dummies" once in a while.

As a final note, while I was attorney of record for the BLM, assisted in large part by my supervisory attorney who had experience with these particular mining claimants, real credit for this case, including the intitial legal analysis in the mineral report that carried the day and served as the basis for the ALJ's treatise on dummy locators goes to my dear colleague, Emily Roosevelt, who passed away almost two years ago after a heroic heart transplant. My own heart was only emotionally broken.

Yet there is more to understand here. Emily was a good government attorney doing her job. She was also a wonderful person who happened to be a Great-Granddaughter of Franklin and Eleanor Roosevelt. Sometimes government and history are humanly real. I'm glad we could make it real on the good-guy side.