As a long-time federal employee, and I know that makes me spawn of satan for many of you out there, I can't help but appreciate a classic case of the bureaucratic stall imposed on someone who very much deserves it - the Secretary of State of the State of Arizona.

The hero of our story is Deputy Attorney General, Jill T. Nagamine, of the beautiful State of Hawaii, the Rainbow State. Here she is (on the right) litigating with Orly Taitz, Birther Extraordinaire. (Nagamine won.) 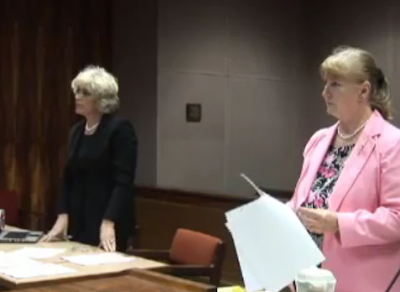 As reported with the highly entertaining emails collected by Nick R. Martin at TPM, Deputy AG Nagamine has placed the burden on the Secretary of State of Arizona to establish under Hawaii and Arizona law that he has a valid legal interest to have verification of what the State of Hawaii and President Obama have verified ad nauseum - that President Obama is a U.S. Citizen born in Honolulu, Hawaii.

Apparently, the AZ Sec of State has been receiving requests from Arizona constituents to keep the President off the ballot in Arizona because, well, as they say in Arizona, he is something other than "Mericuhn." Of course petitions have also been filed by those questioning whether Romney is a unicorn. Makes about as much sense.

Maybe Arizona needs to counter the Mark Lindsay pop classic of the 1970s and put on those rainbow shades! Get with the groove, Arizona! With rainbow shades you might be able to see the unicorns!

For the record, I don't think all (or even any) Arizonans are stupid or racist (well, maybe Sheriff Arpaio). I do think that this says something about delusional obstinacy and irresponsible politicians - like the Secretary of State of Arizona I decline to name. You can look him up.

Hawaii verifies yet again and Arizona folds according to this CNN article also pointing out that the Birthers are continuing to pose some trouble for Republicans trying to focus on REAL issues. I'm still trying to figure out what it is so unique about this President that people have demanded that he prove his U.S. birth. No one has made such a silly stink about any other candidate, many of whom have also lived in foreign lands. Off the top of my head I can think of Romney (France two years, whose father was from Mexico), McCain (born in Panama - yes, a US Territory of US parents), Kennedy (England), .Hoover (Europe), even Jefferson (France) and Adams (England) lived abroad even if in diplomatic service like some of the others above. But no one even raised the issue and there is no Constitutional or State election requirement (well, except for now in some states) that a candidate produce a birth certificate. Why now? Why this President? There must be something unique about him different from all other major party candidates before him. What is it? I just can't put my finger on it.
at 5:56 PM