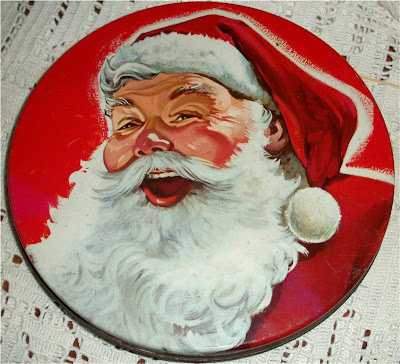 That's what I have joked with my kids over the years in loud, jolly voice. Now I do it with my grandkids. The response has generally been, "No, you're not!" And I just laugh all the merrier. As years go by and they grow up, they join with me in the jolliness with a twinkle in our eyes.

My friend over at Middle-Aged Mormon Man has blogged on the idea that a lot of good, religious people keep Santa out of their holiday festivities as they don't want to detract from the sacred nature of Christ's birth. Some just don't want to lie to their kids. I guess I can respect that. I find more troubling his reporting of those who go the other extreme trying to make Santa into some kind of stand-in religious figure for Jesus finding little religious symbolisms here and there, some more contorted than others, up to images of Jolly Ol' St. Nick actually kneeling at the manger. That's a little creepy. Or, as I put it in my comment over at MMM, both camps seem to be straining at gnats and swallowing the wise men's camels.

I just love playing the jolly "Ho, Ho, Ho," with the kids and their love of imagination as they challenge what isn't even a white lie. I tell them the truth. I really believe I am Santa Claus. So far, all my kids are fairly well-adjusted and even the grown ones out on their own still go to church [mostly].