Sorry. Not live-blogging tonight as my wife and I are working on Christmas Cards and watching Home Alone movies. There is some live-blogging that's pretty good over at Andrew Sullivan. Apparently so far, Bachmann scored a point referring to "Newt Romney" [she means both of them] as being just too liberal for her party. Gingrich is maintaining his front-runner arrogance saying the only reason Romney is not a career politician is because he lost to Ted Kennedy. Romney is a little flustered. Santorum says we need allies in our challenges against the Soviet Union. (Hunh?)

I'll try and check some news summaries later and provide any important commentary/analysis from my feeble keypad to update this.

Later:
Apparently, on a challenge from Perry for something or other, Romney bets him ten thousand bucks! ($10,000!) I'm not sure that was a good idea for a guy trying to connect to regular, middle class people. And Romney gambles? Or was it just some attempt at a schoolyard taunt?

And that attempted bet is picking up traction at least from the reporting on MSNBC.com. I can just see the attack adds now, the $10K bet spliced in with Romney and his Bain Capital guys having some fun with all those $20 bills. In case you haven't seen that yet, here it is: 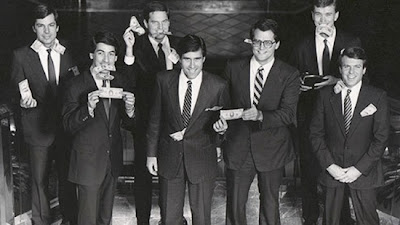 My oldest boy came home from serving a church mission in Oregon. He told us how his Mission President had one overriding rule, "Don't Do Stupid Things." They had it put on t-shirts. That's a pretty good rule for young men at 19-21 years of age. Romney could have used a slogan like that when he was with his buddies at Bain. Maybe tonight at the debate, too.
at 8:25 PM