Great Destruction in the Land Bountiful 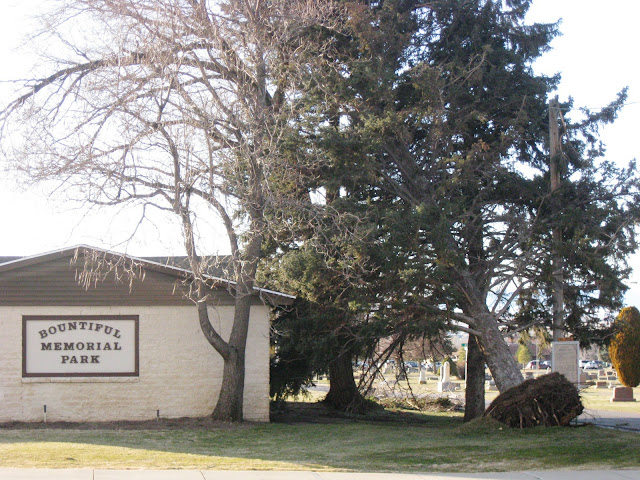 Out for my usual Saturday errands, I went past the Bountiful Cemetery where there had been so much wind damage from the recent storm.  It really did look pretty bad as there were many trees down. There had been some work done by city crews as the lanes through the cemetery were clear. And there were a lot of families checking things out and clearing off brush from headstones. I did some of that myself. 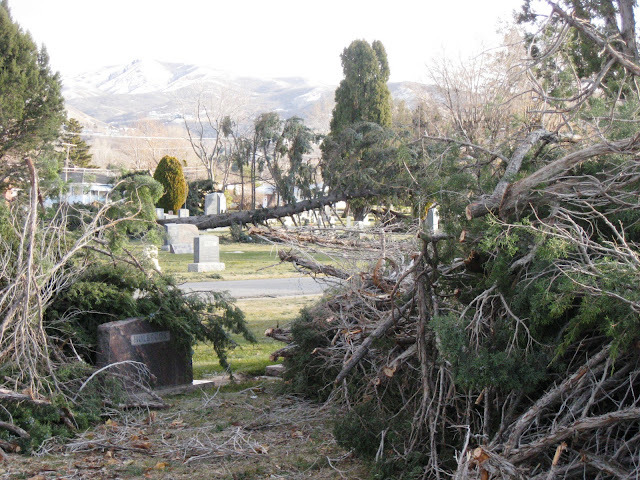 It really is disturbing to see such terrible destruction in a sacred place where we remember our dead and hope for peaceful rest of earthly remains until a glorious day of resurrection.

My purpose in going was to check on the grave site of my uncle who passed away last summer. I called my Aunt who is out of state and she got back to me this morning after my message that the grave site appeared to be undamaged. There is no monument yet, and when it comes it will be one of the flat ones anyway. There were some upright headstones damaged.

Destruction and death seem so arbitrary at times. And they are. God's plans are not ours and it's not entirely clear how much of the specific details He actually manipulates as he set this world in order to follow His laws. I'm certainly no Deist and yet I'm far from being a religious Determinist that we are mere puppets without free will or choice subject to some form of dictated predestination.

Life, or death, certainly go on. As I was checking out the grave sites of family, I noted that there was a graveside service going on in another part of the cemetery. Earlier in the day we had been to yet another funeral of a very good man in our neighborhood who happened to be the grandfather of our son's fiancé. The engagement is only a week old and we hadn't yet met the girl's parents. It was rather odd to see our son accompany his fiancé in to the funeral service with the rest of the family following the coffin. We figured out which would be our future daughter-in-law's parents and they both participated in the beautiful service. We had a chance, not predestined but certainly divinely influenced, to meet them after the service. In such an odd and challenging time to make such a connection we found them to be such wonderful people and we had an immediate, dear friendship established - a new relationship with the hopeful success of our children to last through the eternities.