I'm off politics tonight. This one is rather personal. So, if you don't like the "touchy-feely" stuff, just skip this one.
Recently, I had a couple of people bring up the issue of my “inner child.” (Yes, Gary C, you were one of them.) So, I was doing some thinking and writing on my private blog trying to remember and record my earliest memories. One of those is of a stuffed toy lamb with a music box inside its belly named “Lambie.” He had floppy ears and was a cuddly comfort. That is about all I could remember except for some family stories about him. And I still could feel the emotion as Lambie was my first love. (Well, beyond my parents and grandparents). We were inseparable. And, yes, there was a bit of thumb sucking involved as I caressed a satiny ear with my other hand. Lambie eventually disappeared much to my inner child’s distress. So I switched to my fringed blankie.

Writing about this in the modern digital medium, I thought I would search on-line for a possible picture of a similar stuffed toy to cut and paste into my story.  I googled, “vintage stuffed lamb music box” and among the several that came up was one on e-bay with a reflexive gasp from me. It had been fifty years! But how could I be sure it was the same? I e-mailed one of my aunts who I thought would remember Lambie and she responded back that, yes, it did have pink inside the ears. She also told me that Lambie had eventually disintegrated in the washing machine but my mom salvaged an ear that she used to pin on the outside of my clothes so that I wouldn’t lose it. My aunt told me to go for it if I had found a Lambie.


Next, I e-mailed the seller on the e-bay listing to ask if the music box still played and what the tune was. As I was typing, the fingers flew along from deep inside my mystic chords of memory with the question, “Does it have a whirring noise as well when you wind it up?” The e-mail response was that the music still played some kind of lullaby, but he didn’t know the name. (I’m pretty sure it’s Brahm’s Lullaby.) And, yes, there was that whirring sound. It had to be Lambie! Not wanting to lose him again, I punched the “buy now” button.
I gathered up my courage to overcome any embarrassment (there is some of that when you were a child thumb-sucker), and called my mom to ask her about Lambie. Her description included the music box in the belly and that the lamb was about a foot long. I told her I had found one on-line that seemed to match. I asked if the original had pink inside the ears and she confirmed that I used to hold that pink satiny ear in my hand. Then I asked what its eyes looked like and she said more emphatically that she couldn’t remember all those details after 50 years! She asked if there was a date on it. I said it was identified as mid-20th century which would put it about right. She said rather enthusiastically, “If you found Lambie, go ahead and buy it!” She suggested that my first granddaughter (as yet not here or even expected) would enjoy it. I didn’t tell her I had already pushed the “buy now” button. And I’m not sure I’m going to let any other children near it. But I felt a lot better about the purchase. And it wasn't that much. My wife had also given her approval.
My wife called me at work today and said that a box had arrived. I didn't recognize the sender and didn't dare sound excited, but she said it was probably Lambie. I asked in a joking tone whether I should come home early and she said, "no."
It did not feel like the excitement I get when there is a package with Christmas gifts or the latest from Amazon. It also didn't feel like an adolescent preparing to meet the target of his latest crush. And it wasn't at all like the more serious and real thing when I look forward to my wife's love. A song did stick in my head. Fortunately, it wasn't one of those annoying ones, but Carly Simon's "Anticipation."
And tomorrow we might not be together
I'm no prophet and I don't know nature's ways
So I'll try and see into your eyes right now
And stay right here 'cause these are the good old days
As I said before, I lost Lambie at three years of age or thereabouts and switched to my blankie that I gave up by the time I was twelve. They even say transitional objects help in becoming independent, especially emotionally.
On the bus, I tried to read a little of my book on Eisenhower (who just happened to be president when Lambie and I first met). I gave up and switched my iPod on random play, I heard Queen's "You're My Best Friend."
You're the first one
When things turn out bad
You know I'll never be lonely
You're my only one . . .
You're my best friend
Ooh, you make me live!

When eyes meet in silence
Then I was home. And no one else was. I looked around and didn't see any package knowing that my wife had likely put it upstairs in our room. I came in and set down my backpack, hung my hat, and hung up my coat. I had to make a call to one of my Scouts so I went to find the ward directory and did that. Then I went upstairs, and there was the box on our bed. I went in the bathroom and clipped my thumbnail - just in case. I then went to my top dresser drawer and scrambled a little stirring to find my pocket knife. I gave up and used a key to break through the blue tape and slit down the long side of the top of the box. Two big cardboard folds and there was white paper. I slowly rolled around the object to unfold the large stiff paper and there he was. 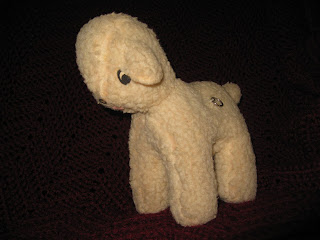 My wife went to girls' camp for a week when our oldest daughter was about three. When we went to pick her up, our daughter did not run into her arms but was a little stand-offish, maybe a little angry about the apparent abandonment. When I came home from two years in Brazil, it was so odd and strangely uncomfortable to be greeted by my family who seemed like strangers. That's it. I still hadn't gotten those synapses reconnected in my head. I stared at him and he looked right. I twisted the wind-up for the music box inside. Yep. Brahm's Lullaby.
My wife came in while I was still holding him. Her response was, "That's creepy." She always was more practical than romantic in a classical sense. I wasn't even sucking my thumb or anything weird. He didn't smell bad. He didn't feel as soft as I was expecting. But he clearly needed a washing.
I consulted with my wife and went to the store for a couple of things and to look for some Woolite. After two stores and calls back to her, we figured that they just don't sell those little bottles anymore for washing fine delicates. Maybe all detergents are more gentle than they used to be.
I came home and told my wife I was just going to use a bubble bath rinse. If people can soak in it, then it ought to be gentle enough for Lambie. I didn't say it, but I was thinking that it would make Lambie smell a little bit like her. But we're trying not to make this strange.
I ran a little water in the sink and squeezed in some Japanese Cherry Blossom suds we bought from one of those stores in the mall we had to go to several times. I took a clean white washcloth and dipping in the soapy water I rubbed in on Lambie and built up some suds, repeating and rubbing then rinsing with another washcloth and clear water. I stuck the end of the legs and the head under the tap and squeezed the soap out of them. Then I got out a hair dryer and turned it on high switching Lambie's position now and then. 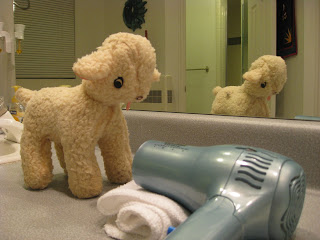 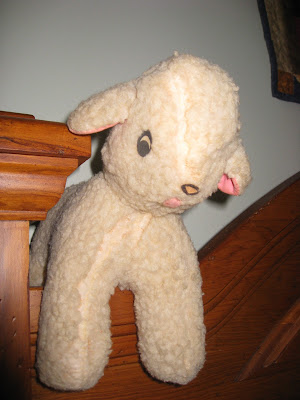 He came out a lot softer and cleaner and fresher. I have a place for him up on the headboard above me in bed. But my wife vetoed that. I told her I wouldn't sleep with him. But, maybe, when she is out of town. . . .

This return of Lambie is admittedly odd but one of the most amazing things that has happened in my life. He meant so much to me as a child and now for Lambie to return to me after fifty years is nothing short of miraculous! Life is so much about loss. Lost youth, lost innocence, lost love, lost hair, and absolutely devastating, lost loved ones placed in a grave. There is so much powerful sentiment and symbolism in the return of a lost love stuffed inside that soft wooly shell. If Lambie can reappear after a fifty-year loss, then nothing is impossible. In no way intending any sacrilege, the return of Lambie is a hint of a much more miraculous return from the dead of another Lamb. The Holy Lamb of God.


UPDATE, Sunday, March 6, 2011
I decided not to be so selfish with Lambie and showed him to my two grandsons, letting them wind the music box, and hold him. I was gleefully pleased to see my almost three-year-old grandson crook Lambie under his arm as he held him by the ear. Must be instinctual or genetic. Of course, his grandma had to give him a cookie for his other hand. 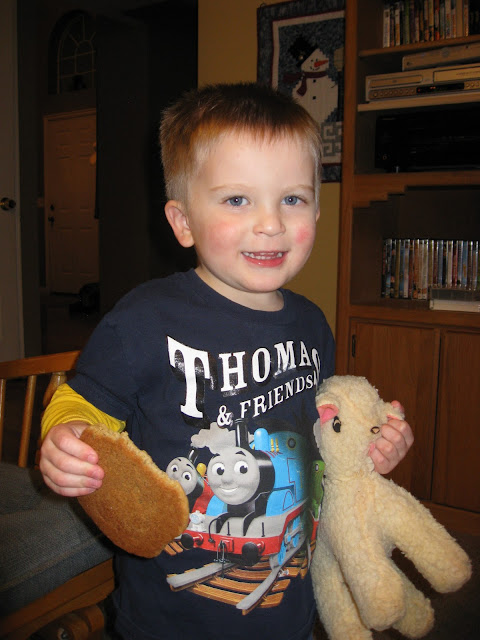 UPDATE No. 2, March 7, 2011
I was talking with a friend who had read this story about Lambie and I said, "Isn't it just amazing that I could get him back after all those years!" She responded, "You do know it's not the same one, don't you?" I was a little befuddled because of course I know that. But you see, my inner child doesn't. And that's OK by me.