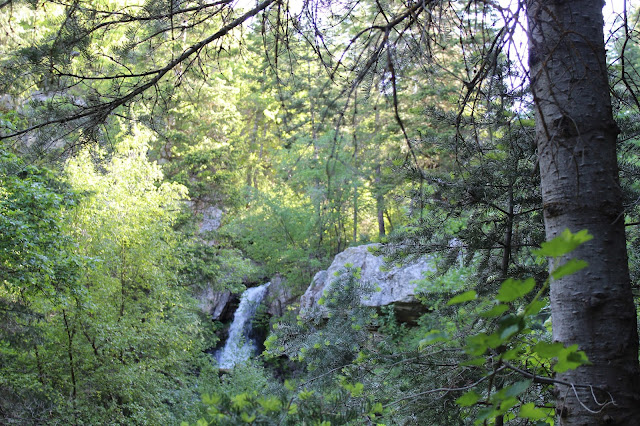 Vaughan's poem of yesterday had been weighing heavenly on me as I realized that I had to get back up with the Waterfall. My eldest grandson is "quaranteening" with us as he went on our trip to help his uncle move to Kansas for grad school. It might be a little because his parents have found out that he is a "teen." It was good to take him up there to share a place I love and give him some exercise.

It's been a mostly sedentary life for me recently. I was swimming laps before the corona hit. I have my gardening, but aerobic exercise hasn't been high on my list. My feet having given out to peripheral neuropathy that neither my foot doctor nor my neurologist know what to do with. We're testing different dosages of gapapentin to see what works best without making me stone-cold sleepy.

We left about 8 a.m. still early enough before the heat of the day. We drove up the first mile and parked. In my running days, I would think nothing of doing the whole thing right out my door, seven miles round trip. The first mile is solid elevation gain. This time we parked by the trail head. 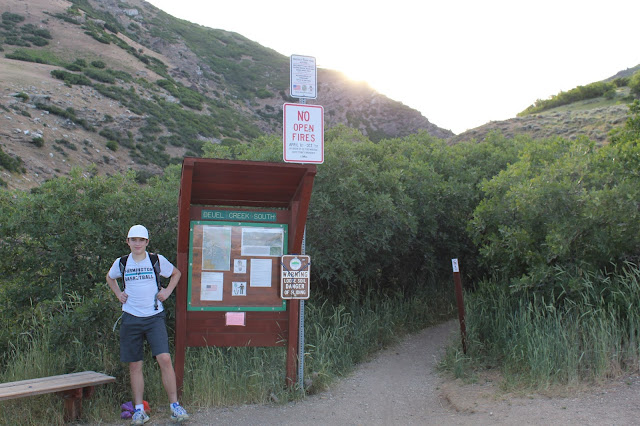 The sun rises late over the Wasatch. And day-long shadows lie in the canyons. Right at the start is an inviting passage into the greenery. The first steps follow an old irrigation pipe on a level grade except where a landslide has dug into the mountainside. It then climbs we see what a lot of locals stop at for the waterfall in Centerville Canyon. It's more of a cascade to me. 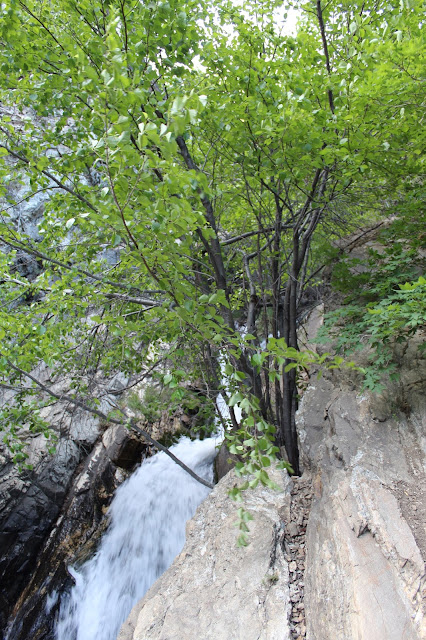 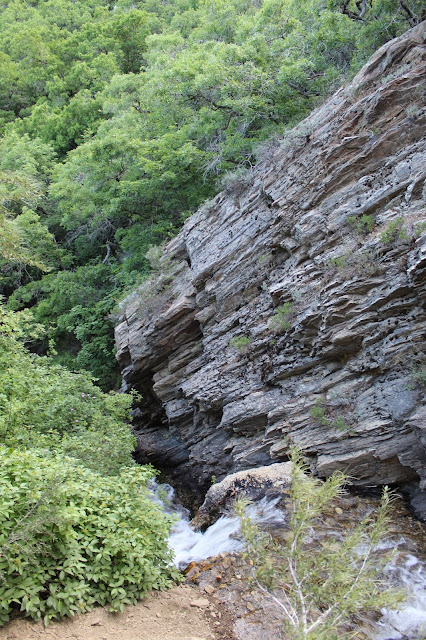 This is the worst part where the canyon is most narrow. The trail is only a worn spot over the rocks with a few lucky tree holds to help out. It's not death defying, but I suppose a slip and fall could break something or at least hurt a bit. It's another reason to have a strapping, young fellow along in case you need to be hauled out. Even alone, you would still have cell coverage here so the County search-and-rescue could get to you pretty quickly. 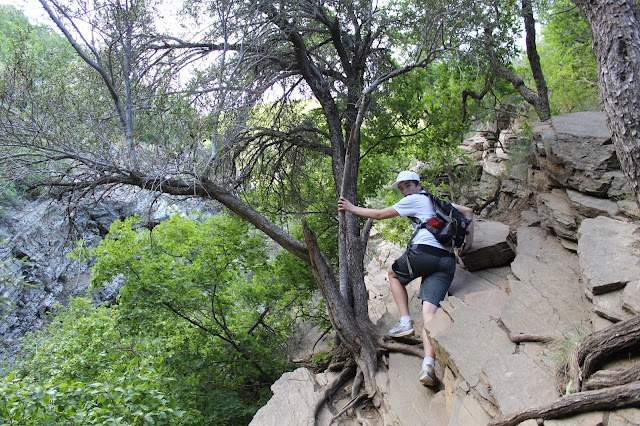 Most of our Wasatch Canyons are rocky and narrow at the mouth. This one would make it impossible to get a wagon or a handcart through. But then, going up the other side from Morgan County would be even steeper. It's not a pioneer road. Still, at the crest is the line between Davis and Morgan Counties. It must have something to do with our Welsh Pioneers! Waterfalls certainly do.

But the waterfall is not yet.

It's good being the old grandpa because I can take pictures of flowers and rest along the way. My grandson was waiting a half mile in at the first campsite. 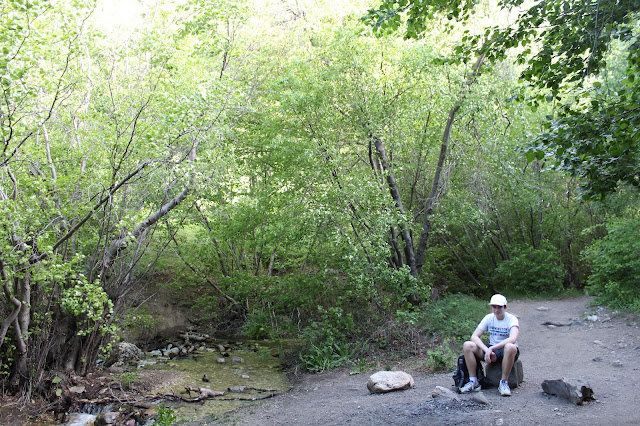 This is campsite No. 1 (unofficially). We got only this far once on a Scout backpacking trip when another adult leader said that he could go no further! It's a nice setting, but the distinct disadvantage is that you are right on the trail and only a half mile in with an occasional other hiker stomping through.

Usually, this is a very undisturbed canyon. I have made entire trips to the waterfall and back seeing no one, or maybe one or two others. It is so nice in the canyon bottom and the trail does beckon onward. 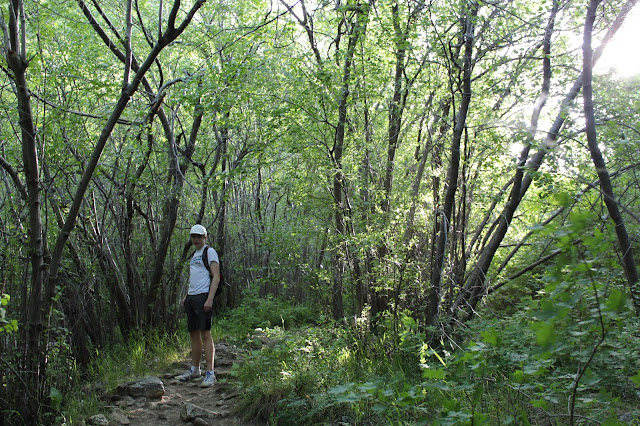 Ah, it does look like there will be a good crop of thimble berries this year! 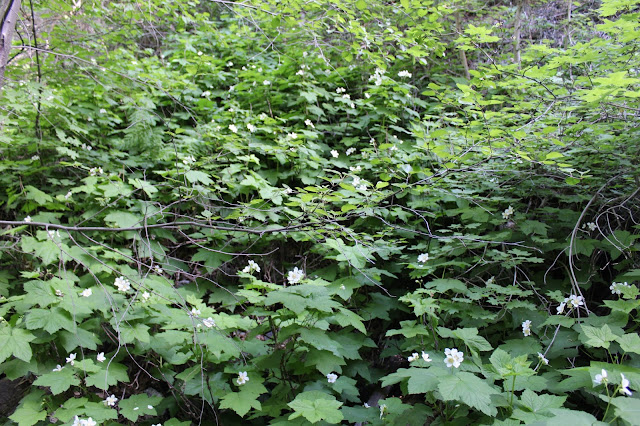 My grandson was usually ahead of me so it was no surprise when I came upon the rope swing at about mile one. 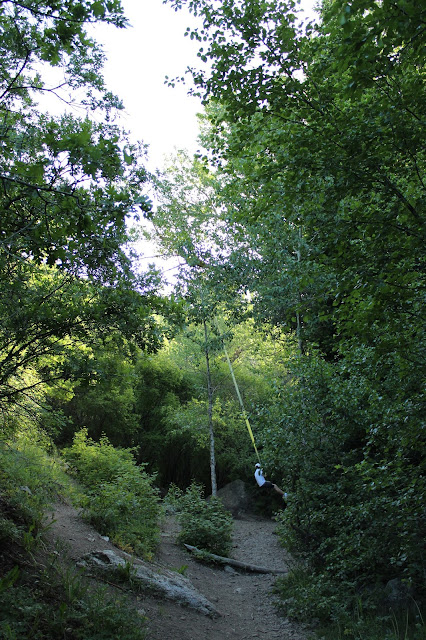 This is, for obvious reasons, a popular spot on the trail. A lot of families make the hike just for this. We once lost a Scout off the high end of the arc. He flew out into the bushes. We bandaged him up and took him home to his Mom who wasn't at all concerned for which I was relieved. Some camp here for a campsite and the creek is dammed up for a mini swimming hole. With the swing and all, I don't recommend it.

A much better place to camp which we have used a few times is just up the trail. 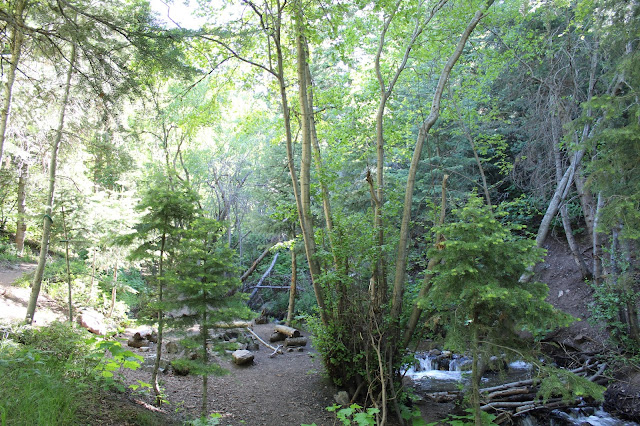 Unofficially Campsite No. 2, it has a really nice prospect, and a great fire pit. There is room for only a couple of tents, so with Scouts, I have slept up on the steep side of the hill sliding into my tent wall all night. The photo above was taken on my way back down so it has more sun. I had forgotten on the way up probably due to heart pounding in my ears.

We were already in the tall pines and firs. 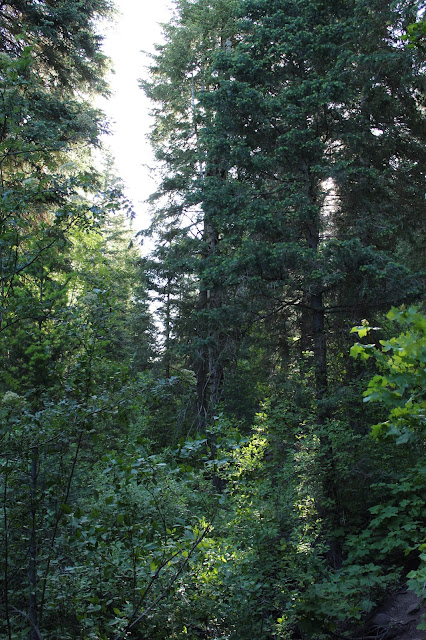 The trees have a way of speaking to me.

My fave of the campsites is No. 3. It's closest to the waterfall, has plenty of room to spread out, it's far enough up that not many use it, and partly for that, there is usually grass to put your tent on. 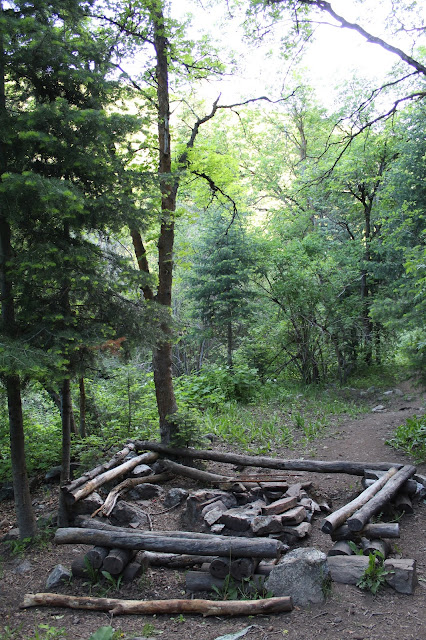 We camped here once in October. As we finished packing up, there were a few snow flakes in the air. By the time we were out of the Canyon, it had become a real slip and slide.

There is more use on this trail than there was some years ago. The trail used to grow a little faint at this point. Now it seems a lot more well trod. Still, it's pretty much to yourself up there. There are moments of sacred-grove purity. 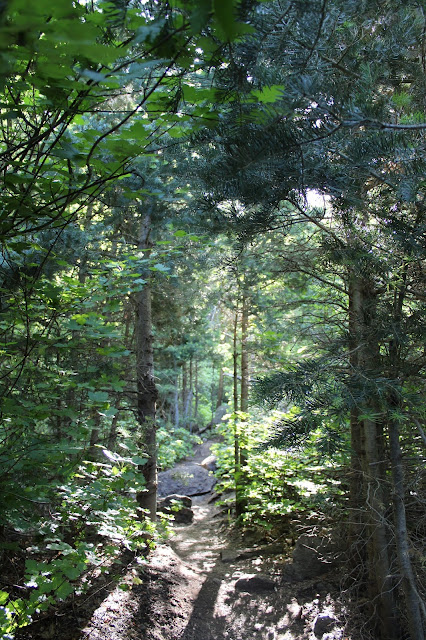 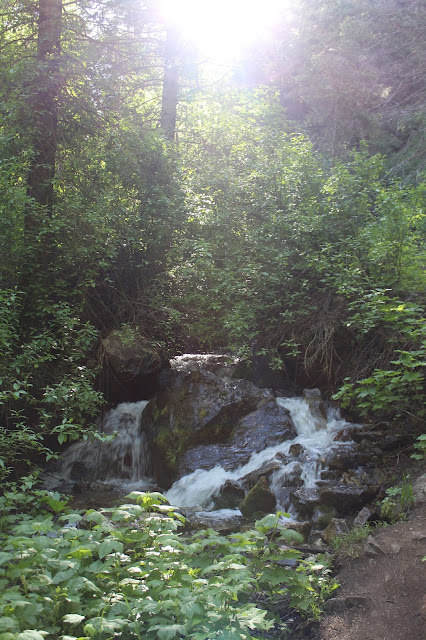 There is magic in the water.

The Grandson was up ahead partly so I could stumble along more slowly, but also so he could discover the waterfall on his own. Which he did. 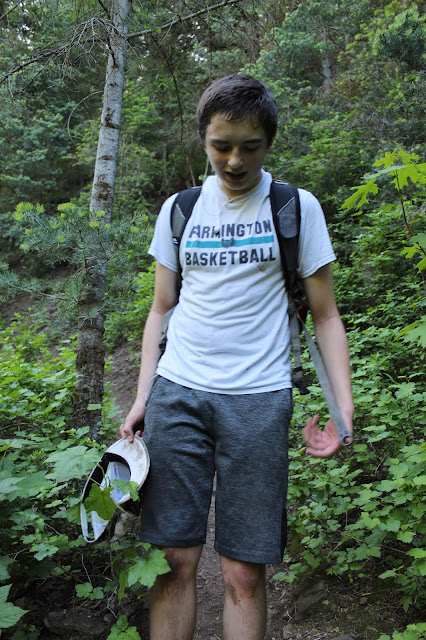 As only a fourteen-year-old can do, he somehow fell in trying to get down to its base. I told him it was OK as I had been in there myself, perhaps a bit more intentionally, at the turn-around point of a warm run.

Water-fall. I like how 17th Century English still had a hyphen there. Deuel Creek doesn't carry a lot of water and it's not the highest fall, but the water has carved a narrow slot that shoots the water out and away from the rock. We have seen it in Springs of heavy run-off when it was like a huge fire hose!

I think this was the first time I had taken a camera up there. My previous pic was stolen off the internet. So, I took some time for an extensive photo shoot. A few thousand words follow.... 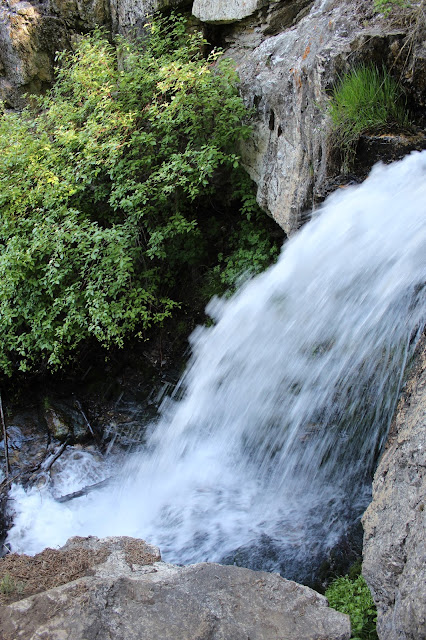 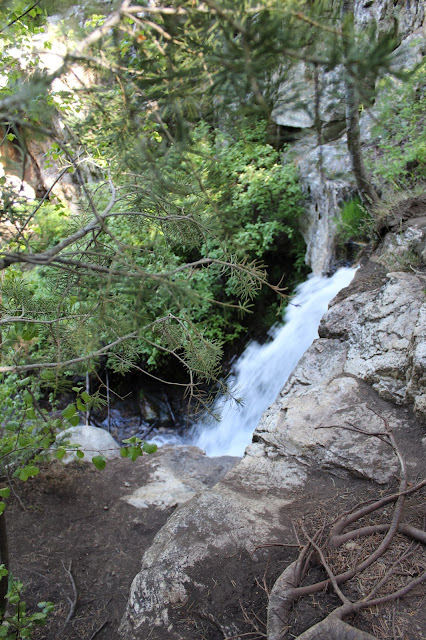 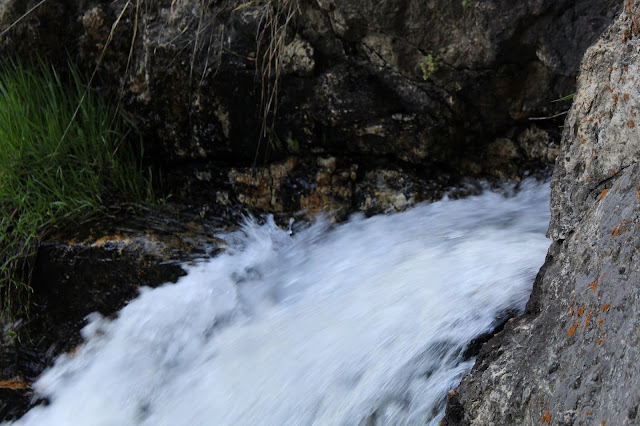 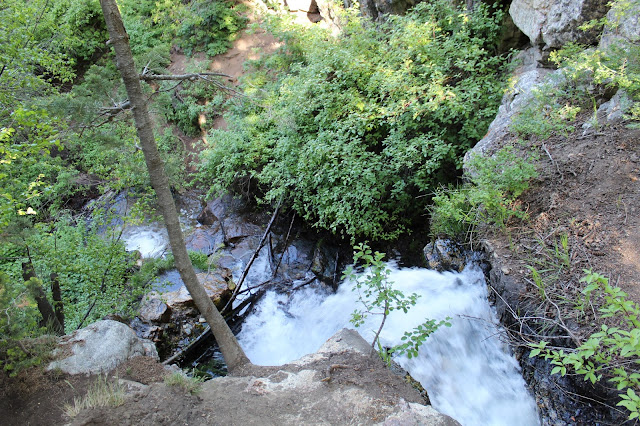 I don't know of any "legends" of sacred springs and miraculous waters in these Canyons. I do know of a place down this canyon where a miracle occurred. It was one of my early blog posts. The place was right here at this bridge: 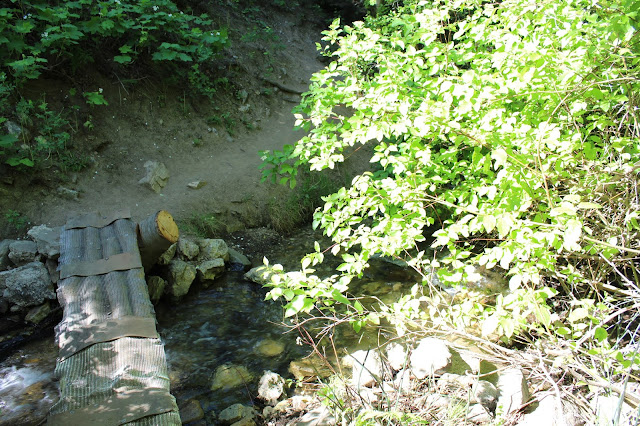 As always, at the mouth of the Canyon is a Promised Valley. 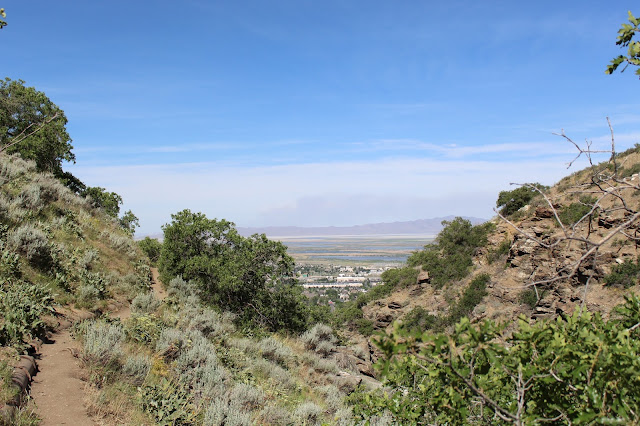