One of my Welsh Professors, whom I have also hired as my estate-planning attorney, shared something on Facebook that I thought would be good to memorialize in a blog post. The links would be easier to find through my search box down on the lower right.

He linked some information and fascinating if disturbing resources on the practice of "red-lining" that came out of the New Deal in the 1930s. The Home Owners' Loan Corporation or HOLC was established to readjust home mortgages that were in default or needed refinancing. Major cities were mapped to indicate areas where loans were most at risk. The neighborhoods marked in red were the most risky based on economic conditions of the residents at the time and also expressly and explicitly by race and ethnicity. While the HOLC was abolished in 1947, these maps were used by banks and others interested in economic investment well into recent times. They helped to establish de facto racial segregation in all major cities not just the South where legal segregation flourished until the 1960s. The effects of red-lining are still with us today. You can read more here and here.

And, you can find the maps at the University of Richmond's "American Panorama: An Atlas of United States History."

My paternal line came to America in 1886. The first couple of generations lived in the lowest rated red-line districts of Ogden, Utah, classifications D-8 and D-9 for "Hazardous" with regard to investment. 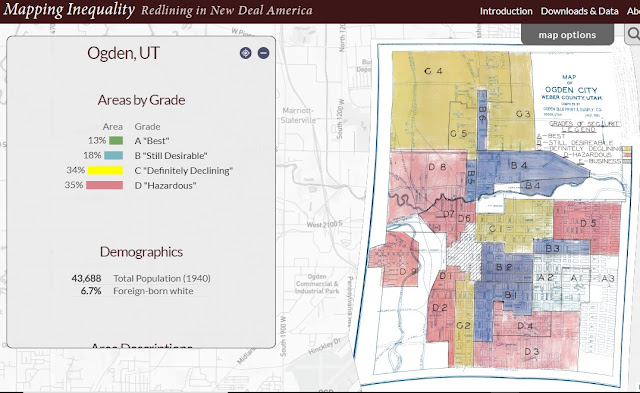 In Ogden, D-1 may have been the greatest concern as the text to the map explained:

The explanation for D-8 where my people lived was:

"Foreigners who work in railroad shops" is the exact description of my paternal first and second generations. "Foreigners" was enough to classify us as red-lined along with the "colored population" and "Mexicans, Basques, and Italians."

My second and third generations lived in D-9 which, while still red-lined, had a bit more positive spin:

They had employment even if it was "anything but a good residential area." It was on the wrong side of the tracks.

Here are some maps for other cities with which I am familiar: 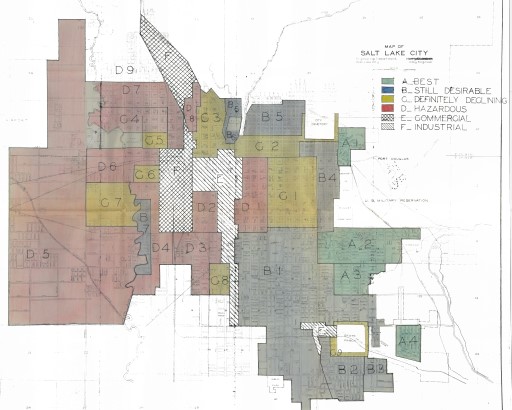 It is no surprise that the entire West Side is red-lined. 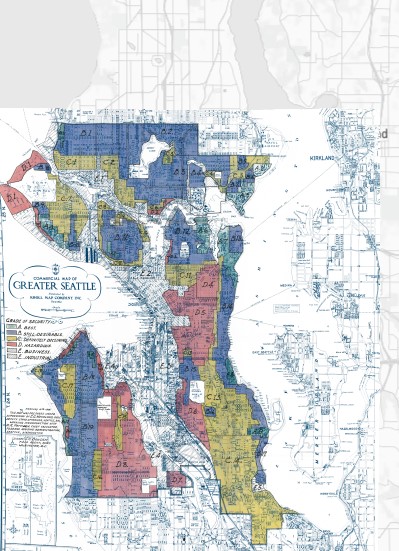 Reading the various classifications was disturbing. Even the "best" neighborhoods for investment were such because of "racial covenants." It is sickening. In the 1960s and 70s, I lived obliviously off the map on the East Side of Lake Washington in the northwest part of Kirkland. And I still knew where the "good" and "bad" neighborhoods were in the city and where the Negroes lived. Seattle, one of the most "liberal" and "progressive" cities even back then.... 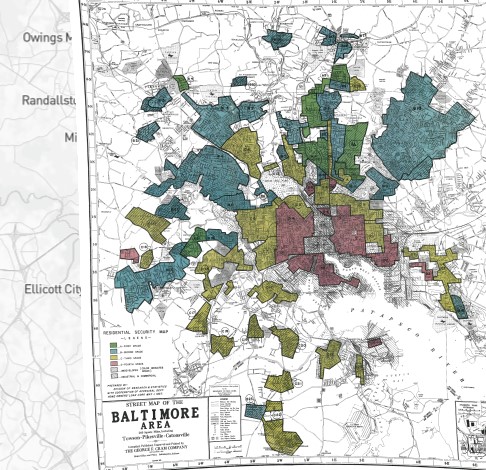 There's a whole, difficult history here centered on Baltimore City and County based on "race." In the 1980s, we lived out of the city in the northwest part of the map. We had friends who were telling us to live "father out" past the bus-lines because "the Blacks won't go out that far."

Apparently, there were no "major cities" mapped in New Mexico, Idaho, or Wyoming.

So how is it that coming from "red-lined" foreigners just a few generations back that I can even have an estate attorney?

Well, the Vaughns always married "up" the socio-economic ladder. Now is not the time for those romantic (?) and sometimes challenging marriage stories. But even as economically red-lined "foreigners," the Vaughns were able to marry into well-established Utah families. That option was not possible for African-Americans who were barred by societal, cultural, economic, and even religious prohibitions. The official ban of my Church ended in 1978. That was the very year when I was of age to be considering marriage, two years before it actually happened. And even in 1980, there were teachings in my Church that regardless of the ban being lifted, we should marry within the same "race" to diminish potential cultural conflicts in the family.

It had never been a consideration to marry a woman with African ancestry even if I had ever met one. And old restrictions of just one generation are very difficult to overcome in our culture. It is happening now more often and there is hope for the future.

I don't at all mean that marriage is the solution to this problem.

But what a burden of heavy history we carry with us! We must do better!

America, we must all take and allow a deep breath.
at 8:28 AM