Sometimes the right book just drops in your lap at the right time. Well, I had to order it and going directly to the publisher rather than wait for Amazon got it too me a little quicker. 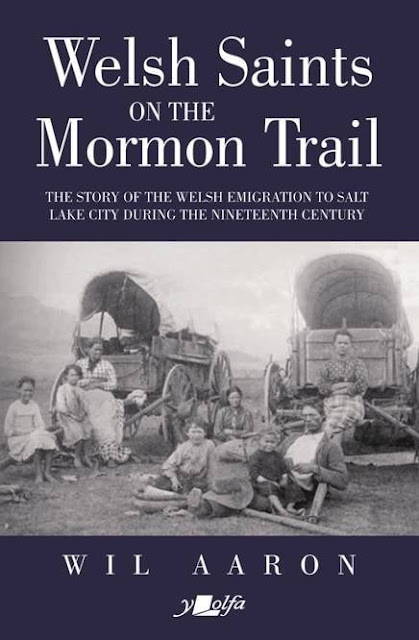 Welsh Saints on the Mormon Trail: The Story of the Welsh Emigration to Salt Lake City During the Nineteenth Century, by Wil Aaron, published in Wales by Y Lolfa is another book I don't have to write because it is better than what I could do. It has already been an aid to me in my current position as a part-time service missionary in the Church History Library (CHL) of the Church of Jesus Christ of Latter-day Saints (the Church).  Whew! The author is not a member of the Church and is not compelled to the full typing requirements of the name. (I recently was making deliveries in the library and a worker unknown to me commented on a book I had with "Mormonism" in the title. She asked rhetorically and matter-of-factly, "We're never going to get rid of that name, are we?")


It is a highly entertaining read as the writer is a producer of music and television programs in Wales. He has the academic credentials as a professor of Music at Bangor University where I have delved into the archives on family history quests. And it's one of the best general histories of the Pioneer Trail and the settlement of the American West as its chapters are divided by years from 1847 to 1868, the range of the Mormon Pioneer Trail. Told by an outsider to the Church and the the American Experience, it presents a fresh vista of the story in a very accessible format.


Wil Aaron gets it right, too. It is not footnoted, but his sources are laid out well in end-notes. There are the standard works, DeVoto, Stegner, Brodie, and also Arrington, Bitton, and Eugene Campbell. As a wonderful example of his end-notes, here he is in on tragic history:

This story of the trail relies mostly on contemporaneous journal accounts collected at the CHL Overland Trail database, the Saints by Sea (formerly Mormon Migration) database at BYU, and the stellar Welsh Mormon History also at BYU collected by Dr. Ronald D. Dennis. Aaron includes Dr. Dennis in his dedication who helped guide him on the research and apparently, to some extent in person on visits to the American West. It is these histories from the past and Dennis's contributions from the present that are told in such an engaging style in the book. They are also the principal sources for my current work at CHL.

Dr. Dennis, whom I still have trouble calling as my friend, Ron, was a college professor of mine some decades past in another language, Portuguese, yet he is my hero in all things Welsh including history and language. It is his practice to meet everyone he encounters with a Welsh surname to ask where their family originated. I stumbled on a response some forty years ago. Later family-history research and work with him on his website reconnected us to the point that he asked me to assist in guiding travelers to ancestral sites in Wales. That was a long and blessed road I was not expecting in my life's trail. I now asked the same question of all the Cymry I meet.

The book is an English edition of Aaron's Welsh version published in 2016. It is not a direct translation, rather an updated version still close enough that the English edition can serve as a guide to a student of Cymraeg or the Welsh Language in reading the former. For pioneers old and young, connected to these Welsh heroes or new to the journey, I highly recommend this book.
at 5:06 AM