Lightning would have been the quickest. Falling most painful. And exposure takes a while but you usually fall asleep first which I didn't that night as I kept arranging my heat-reflective space blanket to alternate sweating and freezing. And we somehow survived.

My Facebook Scout Challenge led me to seek out the Scouts from when I was an Assistant Scoutmaster in Bountiful, Utah, Stone Creek District, Great Salt Lake Council in the late 1980s. We worked with our boys on hiking and camping and did a pretty good preparation for a 50-mile hike across the Uintah Mountains, North to South, Wyoming to Utah.

A feeling of dread woke with me on Day 3. We were camped above 11,000 feet on the slopes of Mt. Lovenia. I had discovered "the Nephite Altar" as we called it the bright and sunny evening before. You need to see it yourself to understand. That block of rock will not be going anywhere as it hasn't for a few thousand years. But that next morning, the pass above us was fogged in.
We had no choice but to go on. The Scoutmaster and other adults agreed that we should get over at least one pass. So we slogged it up through the clouds over Red Knob at 12,200 elevation and hugged the slopes heading down into Dead Horse Lake.

It was a great place for lunch. It was almost a picnic as the sun came out in full splendor and our hopes renewed to make it over the second pass of the day. It wasn't as high in elevation after all. The Scoutmaster and I ran up ahead to scout out the trail as the boys finished eating. We couldn't really see a trail. There were some rock cairns to follow. As it looked like it might be a bit of a challenge, we thought we'd better get a move on it.

You can also see that there wasn't much of trail through rocks and unexpected snow fields. It got as close to technical climbing as I would ever want to be. And these were brave, 12 and 13-year-old boys!

This is the part where we almost died from falling off the mountain. I stopped taking pics when it got worse than the one here. And I can still see it in my mind's memory today that it looked like Scout WP was falling when his backpack lifted and placed him back upright on the mountain. I saw no invisible hand but I saw a boy not fall when it sure looked like he would. Then just before the top, it started to rain.

The storm broke on us hard. Oddly, we had found an actual trail to the top of the pass. We thought if we could make it over, we could find shelter enough to camp.

At the top of Dead Horse Pass we looked into the dark swirl of cold storm blowing straight at us. We couldn't go back down the way we had come. Not if that was coming over us. We dropped our packs with all their metal right at the pass and went back a little ways to a very slight rock overhang. We stuffed the boys in and the four leaders stood in a solid line to protect them from the howling sleet and rain as best we could with lightning crackling all around. Those were the darkest 20 minutes of my life. And there was prayer. 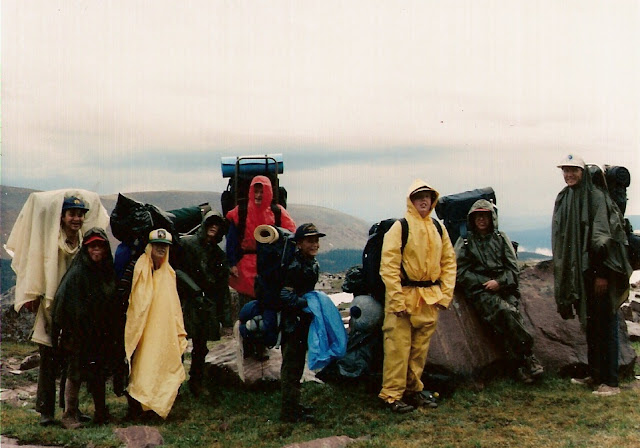 As one of the adult leaders messaged me yesterday:


This adventure counts amongst the great events of my life. Lives were saved and testimonies built and strengthened. J and I talk about it each time we see each other.