Why Cliven Bundy May Be Indicted in Criminal Conspiracy

Because while not actually present at the armed occupation of the Malheur National Wildlife Refuge, Cliven Bundy's public support and encouragement may indict him.

The Associated Press reports that a judge in Oregon has refused to release the sealed indictment against the eleven Malheur armed occupiers in custody and "others." The "others" likely include the remaining four at the refuge in armed defiance of federal law. It may also include Ammon and Ryan Bundy's father, Cliven Bundy, as he has publicly supported the continued armed occupation and encouraged and supported the occupation all through January.

The link above with Cliven's "official notice" to the Harney County, Oregon Sheriff, the Governor of Oregon, and the President of the United States may be enough. Cliven graciously had his signature notarized (without any silly UCC reservations of rights) so that evidence is pretty solid.

And he has supported the armed occupation throughout. His ranch blog contained the following information for money (and snacks) in support of the armed occupiers on January 8, 2016:

On January 1, 2016, under Cliven's name, his ranch blog posted a message defying federal authority in the State of Oregon. 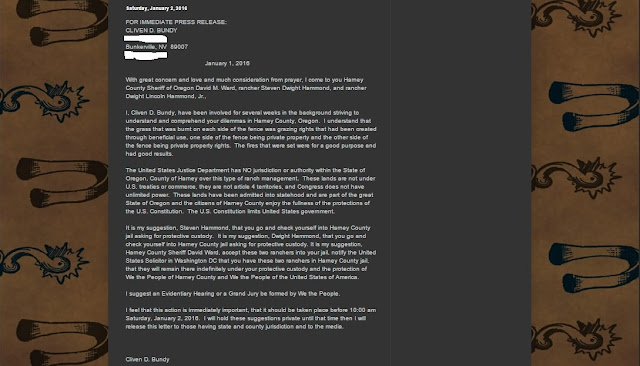 We can argue forever about interpretation of the US Constitution (as I have done on this blog particularly about the Malheur armed stand-off), but the federal jurisdiction seems pretty clear to the federal courts, state courts, and even the Harney County judge. And while not calling for any armed occupation of the refuge, the defiance of federal authority promoted by Cliven seems to be part of the motive and motivation for the armed occupation that started the next day.

This blogger has no inside information with regard to the indictment or any charges. It is not in any way part of my current work assignments although I have dealt with similar issues in a much less public manner. But I'd be willing to bet that the prosecutors have more than this that would justify an indictment of Cliven.

Maybe I shouldn't be writing this to tip anybody off. We don't want another armed confrontation like Cliven provoked to protect his trespassing cattle. Yet several of his cohorts are under custody of federal jurisdiction in fact and not theory. Tragically, one is dead and I will not comment further on that until the investigations are complete. And finally, the reports of the armed occupiers who fled when news broke of the arrests and tragic shooting, some of them leaving their weapons behind, does not inspire much confidence that Cliven will be able to rally his troops again.

Let's hope Cliven can be made responsible for his crimes proven justly in a court of law. And let's hope it happens without any more bloodshed. That will be up to Cliven to surrender peacefully as his sons and others did.
______________
Addendum:
Later, same day. [after work]
The Grand Jury indictment was unsealed this morning and the additional names were the four holdouts still at the refuge and the one previously arrested. Cliven Bundy has not been indicted. Yet. We don't know what work the investigators or the Grand Jury may still be doing.
at 7:43 AM