It was tempting to title this "British Bastards," which, as a son of the American Revolution could have its relevance. And as this is principally about my Welsh Ancestry, it could also be "Saxon Bastards" as an attention generator expressing the millennial frustrations of my Cymraeg heritage.

The real purpose, however, is to explain what I have learned about the laws pertaining to illegitimate children in England and Wales because of the circumstances of our paternal surname beginning with John Vaughan, bastard child of Hannah Vaughan, christened 6 March 1789 in Hay, Breconshire, Wales. We could also use my cousins' endearing name for him, "John the B." (Well, he also was a butcher.)

One of the important things to remember about the complicated history of Wales and England is that different laws applied to them at different times and social customs were also different. Bastardy did not carry the same level of negativity in Wales that it did in England. In medieval times, Welsh bastards could inherit and were often acknowledged by their fathers without social stigma. Customs of acceptance carried into modern Wales more strongly than in England. And there were a lot of bastards throughout all periods of history often making genealogy a complicated matter.

On various genealogical web pages I found similar explanations of the bastardy laws in effect in 1789:


In 1732-3, a woman pregnant with a bastard was required to declare the fact and to name the father.
In 1733, the putative father became responsible for maintaining his illegitimate child; failing to do so could result in gaol. The parish would then support the mother and child, until the father agreed to do so, whereupon he would reimburse the parish — although this rarely happened.
In 1743-4, a bastard born to a women convicted of vagrancy was to have the settlement of its mother, regardless of where the child was actually born. The mother was to be publicly whipped.Source: http://www.workhouses.org.uk/poorlaws/oldpoorlaw.shtml (accessed 12 June 2014)

Act of 1732 ensures that any person after 24 June 1733 charged on oath with being the father of a bastard child shall be apprehended and committed to gaol until he gives security to indemnify the parish from expense. In 16th and 17th centuries the birth of an illegitimate child was an unusual event. Such events became commoner in the 17th century, still more common in the 18th, and so common as to create little surprise from 1750 onwards. An illegitimate child could not take legal residence in the parish of his father or mother because he was not legitimate; hence, his legal place of residence was the parish he or she was born in. - See more at: http://www.pricegen.com/blog/page/6/#sthash.TYglbWL8.dpuf (accessed, 12 June 2014)

Good lawyer that I am, I wanted to see the actual text of the law. Thank Heavens I am not a British lawyer! This search was gruesomely frustrating! But I got it. It was apparently a "Personal" not "Public" Act of Parliament under George II. In the U.S., our Congress publishes both public and private acts in Statutes at Large. Not so in old days of the UK - maybe another grievance Tom J. could have listed on that Declaration of his. Anyway, I did find the text in a treatise published in 1820, so still in effect (until the Poor Laws were significantly overhauled in 1834). 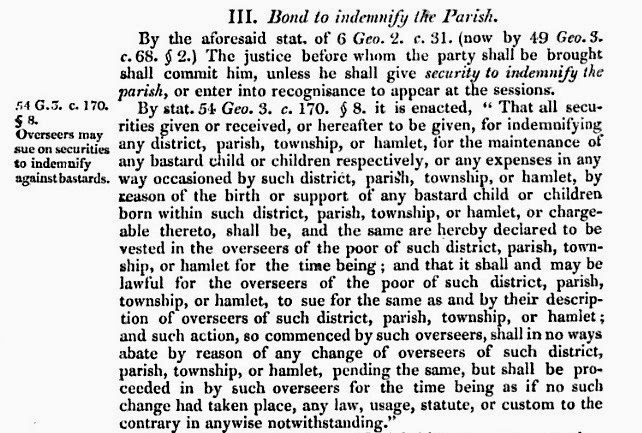 Chetwynd, George, Esq. M.P. Barrister at Law, and Chairman of the Quarter Sessions of the Peace for the County of Stafford, The Justice of the Peace and Parish Officer: Richard Burn, LL.D., Late Chancellor of the Diocese of Carlisle, 23 ed. (A. Strahan, London 1820) Vol. IV, 245.
http://books.google.com/books?id=1JIDAAAAQAAJ&pg=PA245&lpg=PA245&dq=6+Geo.+2+c.+31&source=bl&ots=4gguYAihsm&sig=SDjosAEcvgy3qRCgb1bFzznb4v0&hl=en&sa=X&ei=f3GaU8q_CcihogSC9YGwAQ&ved=0CEIQ6AEwBQ#v=onepage&q&f=false (accessed, 12 June 2014).

Nor would I ever want to publish a book in England. That reference is way too much.

Anyway, what we are getting at here is the authority that would have allowed the overseers of the poor of a parish to petition a Justice of the Peace to put a man in gaol [jail] until his fulfilled his financial obligation for an illegitimate child.

It was much easier if the parents were not married. A forced marriage, even after an illegitimate birth, would have legitimized the child. However, if the father was already married, that option was foreclosed - so it was payment or gaol.

This confirms that "the tailor who was in gaol" 1789 in Hay, was likely already married and not someone who could be forced into a marriage. Tailors Bradshaw and Price still fit that condition. Yet it is only Price who is seen  in the overseer's accounts as owing money to the vestry in Glasbury.

We will yet attempt to explain how the parish vestries in both Hay and Glasbury had a part in this. Just give me a chance to recover from the ancient, dusty cobwebs of  British law books on the internet.