My boy is going on Trek. I am so grateful not to be going. OK, maybe I am a little jealous because they are going on a real piece of the trail just west of Ft. Bridger. But having lived in Southwestern Wyoming for a year (that seemed like at least ten) I have had enough experience on the high plains.

Up there, they measure the snowfall on the sides of houses. They spread coal dust instead of salt on the roads. There are only two seasons- Winter, and if your lucky, July. In July, the afternoon winds whip up the dust, then the thunderclouds rain mud. You have no idea how much improved Rock Springs is now that they have a Walmart! Oh yeah, I love Southwestern Wyoming.

Currently, my aunt and uncle are serving as church missionaries up there in support of Stake Pioneer Treks. I've warned both them and my boy in case they find each other. Actually, this is one of my dear aunts who is like a big sister to me. Her husband is a retired judge and not a bad guy. They posted a picture of what the trek trail looked like last week:


We got this handed to us at church last Sunday: 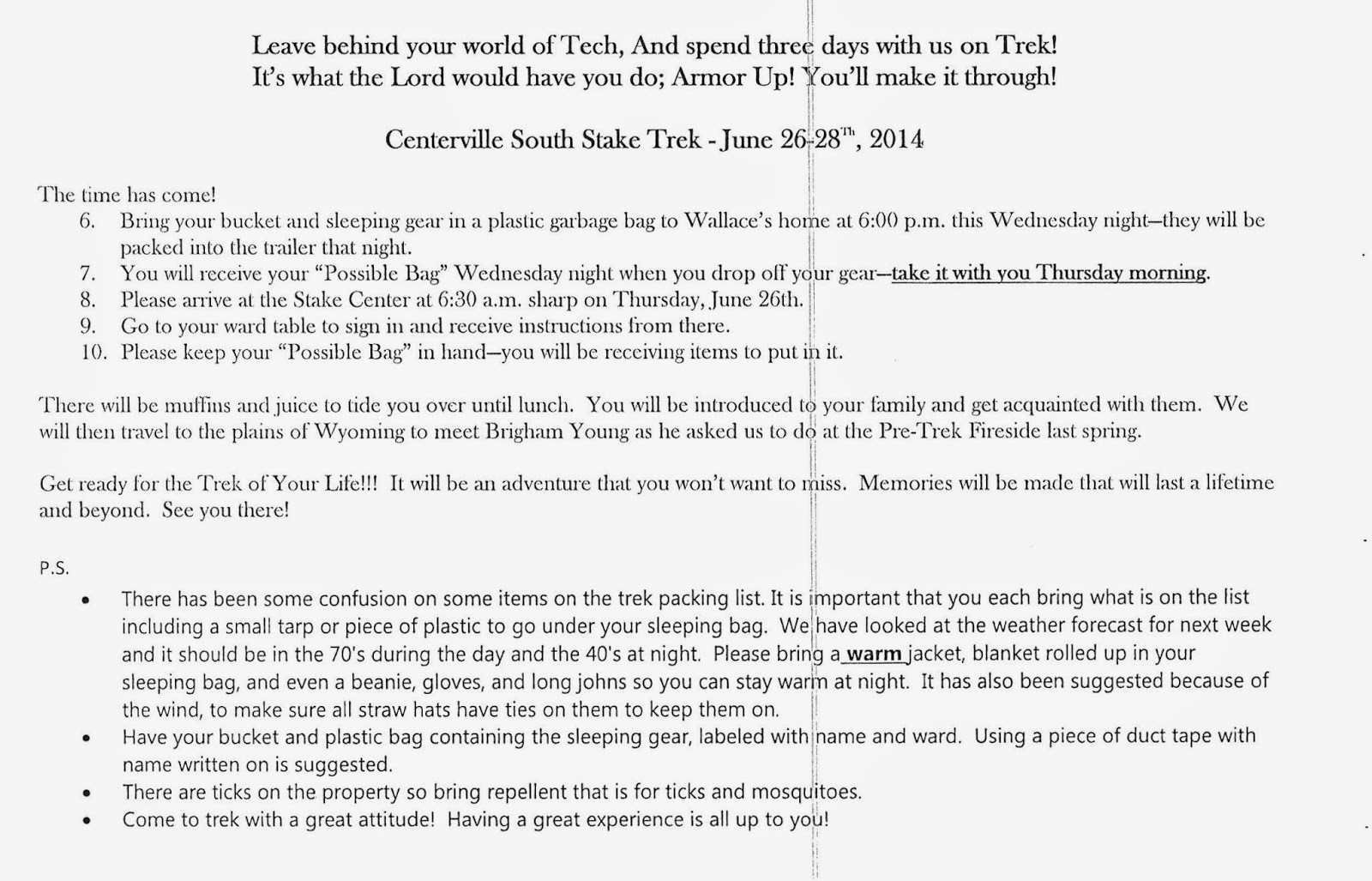 I love history. I love visiting historical sites and pioneer trails. I just have a little concern about fake Brigham Young, plastic buckets, and really bad attempts at poetry. OK, even fake Brigham Young is not too bad a long as they don't do any emotional manipulation masquerading as the Spirit of the Lord. But, they probably will.

I've tried to prepare my children, not to be cynical and rebellious, but to think and figure things out on their own terms. My seventeen-year-old going on trek, does take things seriously. He gets up early on his own and goes with friends to do baptisms for the dead in the Temple. On his own, not a ward-sponsored activity! I've tried to have him take Vaughan family names.

And for trek, I just showed him my copy of  LaMar C. Barrett's Sacred Places: A Comprehensive Guide to LDS Historical Sites, Vol. 6, Wyoming & Utah, bookmarked with the portion of the trail they will be traversing. I also asked if he would wear my flat cap because that's what a young Welshman would have likely worn. That particular hat has been to Wales and I removed it to stand at the grave of John Vaughan, born 1789, who's wife, Elinor, walked those high desert plains with the first Handcart Company under Captain Edmund Ellsworth. I hope that will help give him a more sincerely meaningful experience.