You're NOT In Good Hands with Private Insurance

That's with intentional reference to Allstate, by the way. Thankfully like a pretty good neighbor, State Farm is there. 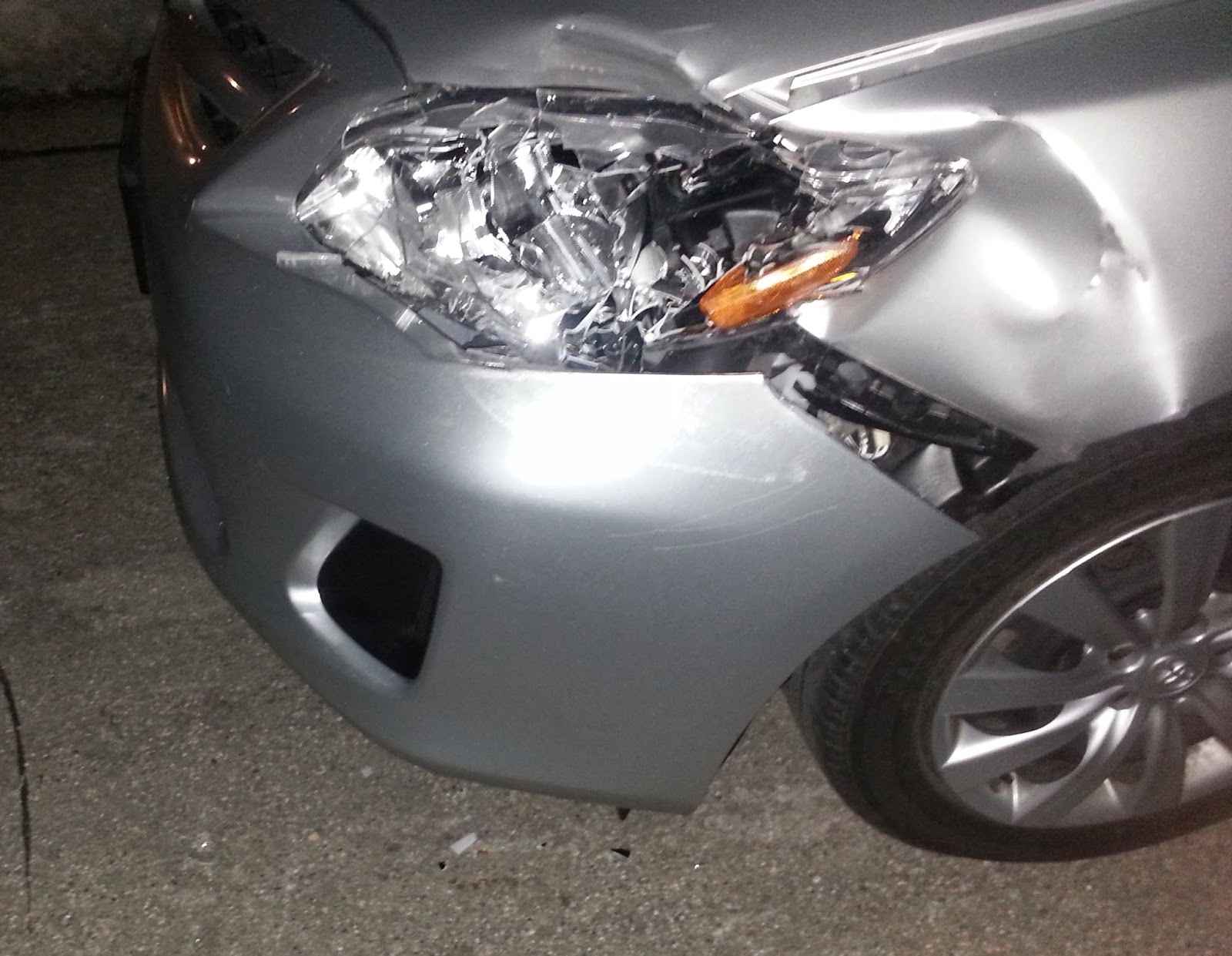 On the evening of New Years Day, we discovered the above situation with our car that was parked out in front of our house. There was no note from whomever may have hit the dang thing.

We followed all the right steps. I called my insurance company, State Farm. The claims department told me that as we did not have a responsible party, it may be considered a hit-and-run so we needed a police report. We called the Centerville Police. Our accident report is No. 2014-0001, which speaks pretty well for the citizenry of Centerville as this was a holiday notorious for imbibing certain mind-altering liquids.

Well, it got a little sad that night as the police officer discovered it was a neighbor of ours who was "celebrating" the New Year and had some issues which I won't go into. As I said to my good buddy after his citation while helping him get back in his house and bringing him some solid food, "Don't worry about the car. That's what insurance is for." Yeah, right.

I also won't go into all the bureaucratic nightmare of insurance and body shop hassles. Suffice it to say that it is now the 15th of January, my car is not repaired, and I was not too happy when Allstate (my neighbor's insurer) left me a voice mail yesterday informing that they had denied my rental car because I had essentially been committing fraud.

Now, a lot of people are upset that the Obamacare roll-out wasn't as smooth as it should have been. Some are even irate about the government being involved in the concept of insurance itself. However, I much prefer a bumbling bureaucracy with good intentions over a corporate interest legally obligated to provide me relief that is not only bumbling, but profit-motivated to limit me in exercising my legal rights! I know lawyers are the pariahs of society, but I have a little sympathy for that radio commercial about how the insurance companies are not your friend but motivated by profit and you need [whatever] lawyer to protect your interests! (Of course that [whatever] lawyer is doing it all out of the goodness of his heart. Sigh.)

And it's better than that. Besides being an attorney familiar with the concepts of liability, indemnity, subrogation, etc., I have processed numerous tort claims on behalf of the federal government. Yes, under the Federal Tort Claims Act, the United States accepts liability as if it were a private party for torts recognizable under the state or tribal law of the location of an accident. Without such a law, the United States would be exempt from such claims under sovereign immunity (you can't sue the king, or in this case, the people's government, unless the king or that government allows you to do so.)

When I process tort claims, I get the best deal I can for the people's government with all the fairness due the claimant. I've denied claims that weren't cognizable, and I've seen some interesting ones. (If a tree falls in a forest within a National Park and hits someone's car, are We the People liable? Usually, no.) And I'll admit, I know one federal attorney (now deceased, RIP -or not) who used to save up his tort claim denials to send out the week before Christmas. He was a real jerk even if they were legally defensible denials. He's the only one [processing tort claims] I've ever seen with that kind of a mean streak. (Oh, FYI, he had been a Republican political appointee).

We shouldn't have to fight insurance companies to get our valid claims honored. We could trust that all to a "free market" where everyone's self-interest balances out in the wash and the strong would never take advantage of the weak! (Eh?) But I prefer a government of, by, and for the People to govern ourselves in equity and fairness with necessary and appropriate regulation. That's what I try to do in my job. I'm not in it to make a buck trying to best one on the public, or even insurance companies.

I finally found a State Farm claims agent who is helping me get Allstate straightened out. Let's hope the same for my car.
at 4:49 PM