Santa Fe occupies a beautiful location beneath the south end of the Sangre de Cristo, the Blood of Christ Mountains. However, it the old days, it wasn't that easy to get there. Between Albuquerque and Santa Fe is a very interesting escarpment called La Bajada, "The Descent,"or as I like to translate it, "The Big Downer." Going up is usually the problem as we found trying to make it up I-25 in our old Ford Escort, not a great ride even when coasting downhill. And the freeway climb, while steep, is much better engineered than the original highway demonstrated in this vintage postcard a friend gave me. 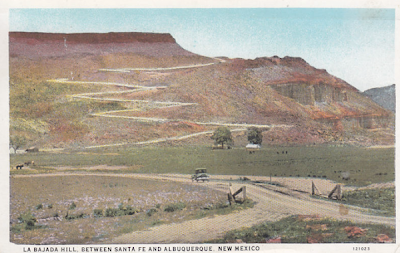 I was up at the top of La Bajada once with BLM Realty and Archaeologist Specialists. We had concluded a land/exchange/purchase at La Cieneguilla to help protect the petroglyphs at the top of Santa Fe Canyon. This is, according to them, the largest concentration of Kokopelli figures anywhere. Kokopelli is very interesting to find in the wild. He doesn't look at all like he does as a souvenir magnet or ornament in the gift shops. in the original rock form, he doesn't wear the little skirt and is clearly a male. In fact, and I'll tread a little cautiously here to preserve my family-friendly blog classification, Kokopelli, hunch-backed, flute playing dancer that he is, would probably be making one of those calls to the doctor they talk about on those commercials to inform that it has been more than four hours. ("Doc! I'm hunchbacked and blind. . . but I'm happy!)


Repenting from that very bad joke, let's get back up to the top of La Bajada. I wrote a letter to New Mexico Historian, Marc Simmons, with a contemporaneous explanation of my historical quandaries. It was on Santa Fe Ward letterhead as I was Bishop at the time and I was attempting to gather information for a potential Scout adventure. That did eventually happen which we will hopefully get to in later posts. We'll let the letter take it from here for this installment:

This is to thank you for your "Trail Dust" column in the Santa Fe Reporter. I have lived in Santa Fe for eight years now and have enjoyed your stories of New Mexico history.

I would also like to ask for any help you may be able to give on a matter I have been working on. I am very interested in determining the route from Santa Fe down La Bajada of the Mormon Battalion who marched under General Kearny in the War with Mexico. My ultimate goal, beyond my own historical curiosity, is to have our Boy Scouts in our church sponsored troop hike what portion of that trail that is accessible and can be determined.

Some time ago I read portions of a Journal from a member of the Mormon Battalion. I forget what it was, but it may have been the Sergeant Daniel Tyler book. Anyway, I read that when the Battalion left Santa Fe, they spent their first night out in Agua Fria, then went South down La Bajada, crossed the Galisteo River and came to the Rio Grande at San Felipe.

Professionally, I am employed as an attorney with the U.S. Department of the Interior. I was out at Cieneguilla one day a year or so ago with a Bureau of Land Management realty specialist and an archaeologist when BLM was acquiring title to the La Cieneguilla Pueblo site. We went up on the mesa on the north side of the Santa Fe River to see the petroglyphs. While up on the mesa, the BLM archaeologist explained that the original El Camino Real went right up through the Santa Fe River Canyon but when the Army came with Kearny, they traveled along the mesa top and found another way down La Bajada. Standing as we were on the edge of La Caja del Rio Mesa, I assumed that the Battalion traveled up that Mesa and down somewhere perhaps where the old highway switchbacks to go down below Tetilla Peak. This, of course, didn't fit the "going South to the Galisteo River route" but I thought it might be close enough.

A few weeks ago, I was out with some of our Scouts at Cochiti Lake and we stopped at the bottom of the switchbacks of old Highway 85 above the town of La Bajada. I had seen it on the maps and even in old pictures but I was very impressed with the old road and have become somewhat obsessed with the whole La Bajada adventure. I was wondering if the Battalion had found a way down the mesa near the old highway switchbacks. Of course they would not have engineered such a marvelous road in those days, but I thought maybe the could have come down near there.

Since then I have been looking for maps and books about the routes down La Bajada. I eventually came across the Abert-Peck Map of 1846-47 commissioned by General Kearny. There is a framed original print hanging in the Southwest Room of the Santa Fe Public Library across the street from where I work. It was like hitting the Mother Lode. I asked a librarian if they had another copy of the map that I could use to make a copy. She graciously took it down from the wall and we used the copy machine. I went over to the map room at the Museum of New Mexico Library across the street. Looking at their maps (and another copy of the Abert-Peck, but I already had my copy) I realized that Kearny's Army of the West would have used the standard El Camino Real down La Bajada, wherever it was. Someone I talked to that day (last Thursday) informed me that there were several routes to deal with La Bajada on the old Camino Real, some of them depending on which season of the year it was.

The Abert-Peck map is great but a little confusing. For one thing it covers a large portion of New Mexico without a lot of site specific detail. Also, many features are not named and the elevation marks of the time are not as clear as more modern topographic elevation lines. Nevertheless, I began to mark up copies of my copies with names of geographic features apparent on the map and attempted to superimpose modern features, most notably, the Interstate. I then tried to place the route from La Cienega down La Bajada to the Rio Grande from the Abert-Peck map onto modern topographical maps.

From all this it appears that an actual route for the Army of the West and the Mormon Battalion is apparent not north of the Santa Fe River or even north of the Interstate, but taking off to the Southwest of La Cienega crossing south of the Interstate just on the north side of Cerro de la Cruz and heading for a low spot between the edge of La Bajada Mesa and the Cerrillos Hills. The portion from where the La Cienega Road hits the Interstate appears to cross private land and has been blocked off. But an old dirt road does appear on some older USGS maps and such a road to Waldo and Cerrillos from the Interstate at the top of La Bajada. I have been out on the road to Waldo both yesterday and today. It appears that the road down the hill for some distance would match exactly the road down the mesa indicated on the Abert-Peck map. Then the Battalion route or Camino Real would have crossed the Galisteo somewhere it the Galisteo Dam project lands and swung around to the West to come in at San Felipe.

I figure the Budaghers land would have been on that route and so the placement of the Mormon Battalion Monument just beyond the abandoned outlet mall would be pretty accurate. Although at that point the Battalion route would be crossing the Interstate nearly perpendicular and not following the Interstate as might be expected.

But I'll worry about the rest of the route later. I would appreciate any comments you might have about the route from Agua Fria down La Bajada. Maybe I can inspire a "Trail Dust" column. Regardless, keep up the good work with your writing. I would love to hear from you if you could possibly spare the time.

Thank you for your attention.

I was so very close! But no cigar, or no Cerrillos, better said.

Is it any wonder they call New Mexico the "Land of Enchantment?"