The President Is Playing the Lollipop Guild for Suckers

Yes. While it is an artificial and unnecessary crisis, it is a real crisis with significant risks. But it is not all as it seems. And it is certainly not as the Lollipop Guild (AKA tea party) believes or wants it to be. 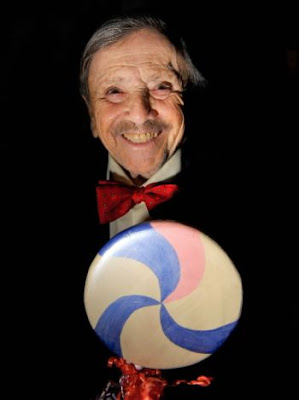 AnonymousD accused me today of agreeing with Michelle Bachman that it's not necessary to raise the debt limit by August 2. Of course she says "ever" so that's one little difference, but I did have to concede that I sort of agree with her. The only thing that happens by August 2 or whatever the actual date is which is probably pretty close to that calculation by Secretary Geithner, is that the United States will no longer have the legal authority to sell new debt instruments. Now, we still could have many and as yet unpredictable economic consequences, certainly not good. And the stock market is already showing some significant anxiety. That does not mean we will default on anything or collapse into total economic and political anarchy (sorry, Lollipoppers).

There is yet another excellent analysis on the Atlantic website today this one by John Carney of CNBC. It makes a lot of sense. If the Congress authorizes, appropriates, and even obligates by law the expenditure of funds by the Executive, then the Executive has a lot of authority to be creative under the Constitution to pay the bills. Sure, some of it may be by printing more electronic money (however you do that) or allowing credit lines to stretch on the "faith and credit of the United States" as happened to sustain the Civil War to the benefit of our Constitutional Union and the most essential of Civil Rights (i.e., freedom from slavery). Sure, it may lead to some inflation and Congress ought to put itself back in charge as the people's representatives. Yet as Carney points out, Congress's failure to authorize new debt instruments actually takes power from the Federal Reserve and deposits it back with the Secretary of the Treasury. Isn't that something the original Ron Paulite tea-partiers want? Well, I guess they still don't get their "fools gold" economy.

Anyway, another hint that there will be no total economic collapse or shutdown of the people's government was noted by one of my good friends at work. We've been around the block a few times and she noted that there hasn't even been a hint of furlough notices to us feds to shut us all down next week (unlike last Spring and nearly every year during Clinton/Gore's gutting of the federal workforce-they did balance budgets, after all). It is true that we feds are legally authorized to function under current Congressional appropriations (whatever the solidity or fictional status of the actual money) until the end of the fiscal year, September 30. Of course I shouldn't be giving the Congress any more invitations to crisis deadlines.

So what to make of the President in all this? Is he playing us all for suckers in the plans to further his Marxist/Muslim/Elitist/Secularist plots? Maybe. I actually think his skills and experience as a community organizer, learning to work with difficult people and operate without budgets, serves him quite well in these circumstances (not to mention the whole Con-Law Professor thing). The Republican leadership has certainly bought into the crisis mentality as they continue not to solve it. Are Boehner and McConnell really going to say all of a sudden, "Hey! Wait a minute! There's no crisis and we just gave unlimited authority to the President and Geithner to save our monetary system at least up to Sept. 30!" I don't think so. I think there will still be a deal. It will be a deal principally without the Lollipoppers to the disadvantage of Boehner and his party leadership, not the President in the long run.

It's risky business but the President may just be playing this very well not to cave to the Lollipop crowd but to attempt every possible compromise as he protects the people of the US (all the people - not just the imaginary "real" ones in Sarah's neighborhood or even the corporate persons pulling the lollipopping strings).