Mine Eyes Have Seen the Glory!

One of the odd things that is hard to get used to living in Utah, although in sort of a good way, is that with Independence Day early in July and Pioneer Day near the end (the 24th to commemorate the entry into to the Valley of the first Mormon Pioneers), there is a three-week, patriotic extravaganza. The two holidays are celebrated essentially the same with parades, fireworks, picnics, patriotic and religious pageants, etc. 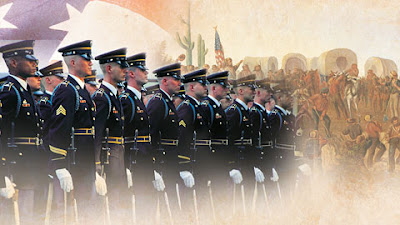 Tonight my wife and I went to the Pioneer Day Commemoration Concert of the Mormon Tabernacle Choir and the Orchestra on Temple Square. The tickets are free but you have to have an "in" to nab them. Fortunately, we have a choir member who lives in our neighborhood who offered us a couple. In fact, he is one of my old Boy Scouts from twenty-five years ago when I was an Assistant Scoutmaster and Deacons Quorum Adviser in the Bountiful 27th Ward. (You can pick him out fairly easily in the choir because he is right behind one of the two African-American members who tend to stick out a little).

The program was a tribute to those who serve in the military in a "pioneer" sort of way. It was a very well produced and presented program. And it was so eclectic, cross-cultural, and uncontroversial in a civic religion sort of way celebrating and honoring without the least taint of partisanship, or heaven forbid, xenophobic jingoism (and no Lee Greenwood!)

They had members of the choir who have served in the military tell stories on screen and a few introduce parents or children who are veterans. The mother of former Miss Utah and Afghanistan Veteran, Jill Stevens, is in the choir. Richard Elliott performed a rousing Liberty Bell March on the Conference Center Organ in tribute to his father who was wounded in the Battle of the Bulge. It was a real conference-center burner with patriotic lights on the organ pipes at times invoking a circus calliope. I was just glad a big, cartoon foot didn't come down to stomp on him.

The highlight of the program was a film of a Tuskagee Airman Veteran whose Broadway-credentialed son, Brian Stokes Mitchell, was one of the guest performers. The son sang some beautiful vintage pieces from the WWII era including a moving "What a Wonderful World." His 91-year-old father was in the crowd and acknowledged. I had seen him come in wheelchair-bound with a shock of white hair and from the distance I was at, it gave a strange evocation of President David O. McKay, just right for Pioneer Day.

In the middle of the concert was a chilling rendition of "Battle Hymn of the Republic" as only the Tabernacle Choir can give. That was worth the price of admission. (Well, at least my tithing for a year or so!) God Bless, Julia Ward Howe, Lincoln, and the Union!

And I just learned today that my U of Utah boy was invited by some of his Tongan friends to march with them in their group for the Days of '47 (1847) Parade Monday morning. They were a little short-handed and if you knew my boy, you would know why he fits in so well with his Tongan brothers. It's not the size of things. That boy can and does make friends with whatever group he is with. So, the pioneering spirit and good will to all builds towards a better future.

And who can fault a tribute to the military that ends with "Let There Be Peace on Earth." I've been trying to let it begin with me.
at 10:59 PM