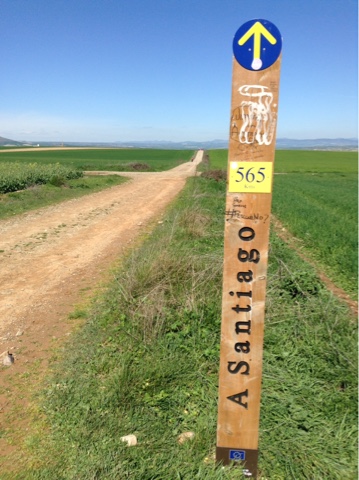 This is a uniquely special guest blog from my old boss and friend (who's not really that old). He retired a few years ago and has been encouraging me to do the same ever since I was eligible. We'll see . . .

I sure to love and admire his sense of adventure. He and his wife, "B," are emailing and posting photos on Facebook of their current adventure. I'll let him tell his story: 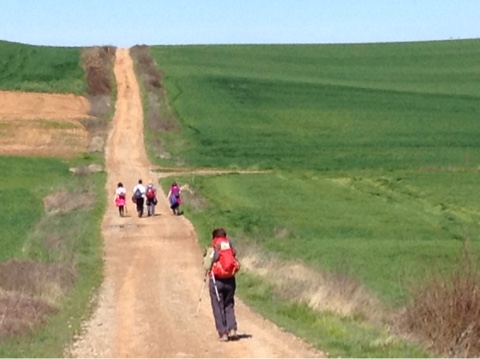 We have walked for nine of the past ten days--more than 140 miles--on the Camino de Santiago de Compostela, the Way of St. James, or simply The Way or The Camino. Except for today's mostly flat, 13 1/2 mile walk, every day's travel has been tough.

The Camino is a 1,300-year-old pilgrim's route. Medieval pilgrims began their walks at various points in Europe. Many individual routes gathered across France and then converged at St. Jean de Pied de Porte at the foot of the Pyrenees Mountains.  From St. Jean in southwest France it it will take about five weeks of walking--about 500 miles--to reach Compostela in northwest Spain, where many believe that Jesus's disciple James, the patron saint of Spain, is buried.

Most days have been difficult due to distance, the path and the climb, weather or all three, but for me the first day was the toughest. We walked 16 1/2 miles from St. Jean to our night's lodging at an "albergue" at a monastery near the mountain village of Roncesvalles, Spain.  Spanish authorities had closed the mountain route across the Pyrenees due to deep snow so we walked that day mostly on roads, gaining a respectable 2,900 feet of elevation along the way. At our high point we tramped through snow and slush and mud.

My pack weighs about 28 pounds. We carry no tent, no stove or food, only a very light sleeping bag and a single change of clothes. Probably the weight should be less but I carry six or eight pounds of camera, batteries, chargers, cords, GPS and I-Stuff. We sleep each night in a co-ed dormitory room of bunk beds in municipal or private albergues, some with eight beds and some with 75. There is the privacy of a WWII army barracks. Sometimes it seems as though everyone except B and I snores.

The albergues are only for pilgrims, and they are cheap--five to eight euros ($5.50-$8.00) per bed. They are not for slackers. They require that one leaves by 8.a.m. Sometimes the bathroom is in another building. Sometimes there is a kitchen, but mostly it seems to be Asian families who cook their own food.

At 8 a.m. we search for coffee and sometimes breakfast. After that we stop three or four times in villages for coffee or cokes or sandwiches or beer. The food is fairly cheap. It is mostly good or good enough and sometimes very good. The bread is always wonderful. Often we get a sandwich of crusty bread and a wafer thin slice of Iberrian ham.  The main food problem is the coffee, which seems unavailable except in capuchino-sized cups filled mostly with frothy milk.

The typical Pilgrim's Menu costs 18-24 euros ($20-$27) for two including beer or wine. For that one gets a salad, pasta, a piece of roast chicken or meat, and a light dessert. Typically we walk for six or seven hours, get a bed and rest for a bit, shower and then try to find a restaurant that will serve us food before 8 p.m.

Sometimes at night we play Scrabble. I won the last two games but B is still ahead 3 to 2 on this trip.

The walking itself has been village-to-village along low mountains or rolling agricultural land. On some days we walk almost entirely on paths or narrow, unpaved farm roads but on other days much of the walk is on paved roads. There have been a few big cities and there will be more. Usually the route is easy to follow because it is marked with yellow  and blue scallop shells, the symbol of The Way.

For me it is a secular  (but contemplative) walk. I am not very religious and, to the extent that I am religious, I am Protestant and not Catholic. I think that St. James and other saints play a lesser role for Protestants than for Catholics. But I do join with B everyday in trying to keep in mind a particular friend or family member.


So far one day was dreary and drizzly and seemingly all on slick clay and ankle twisting cobble-sized rocks. Another was all strong, cold rain with occasional hail and claps of thunder. The other days have been sunny and pleasantly cool. 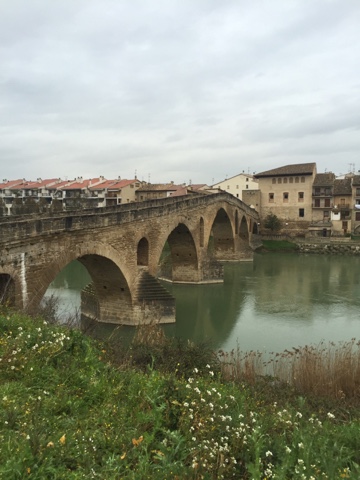 So, are we having fun yet?

I think so. Whether three more weeks of this will be too much remains to be seen. But now I know that we can do it.

Would I recommend this to someone else?

Perhaps not to someone with two or three weeks of vacation each year who needs that time to relax. But B and I have 12 months a year to relax, and we usually travel for six or seven months of that time.

I am very pleased that we decided to spend a month walking the Camino. 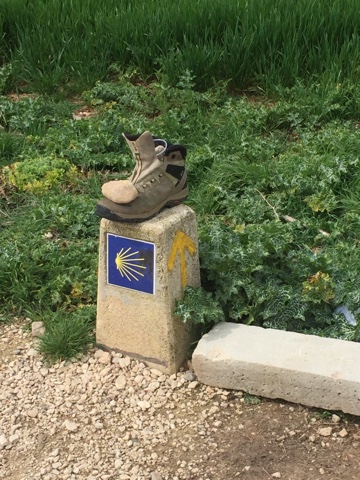