I Will NOT Vote for Hillary! 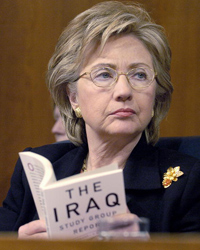 I know I've sworn off political blogging for a while. But this actually helps explain one of the reasons. It may even win me some love back with many friends and family. But then, probably not. Because I'm not voting for any of the Republican clowns who are even worse than 2012 which I didn't think could even be possible. And not that it makes much difference in Utah anyway.

No, my reason is simple.

The Iraq War was wrong.

And I knew it was wrong long before it started and throughout. I think Hillary did too and that's one reason why I oppose her and will forever. And dang it, Joe Biden voted for the war too. Hillary admits it was wrong now as she goes all tough on Iran even with grudging support of the President's negotiated agreement.

Bernie Sanders voted against the Iraq War.
at 5:22 PM