While still a gratuitous polygamy joke, it is one of the best I've heard:

Handsome devil, apparently, handy with the mountain fighters and spare-time on the females. . . .

And when Brigham Young's people came to the Top Towns on speculation, he was off to Salt Lake City and the Latter Day Saints. No sight nor sound of him since--must have died of women, I reckon.

'There are worse ways of dying,' said Dewi, and I saw my father give him a queer old look and a sigh.

This is from Song of the Earth, by Alexander Cordell, the conclusion to the historical fiction trilogy of the Mortymer and Evans Families in the southern valleys of Wales during the harsh Industrial Revolution. Revolution? Should be "Revolutions," plural. 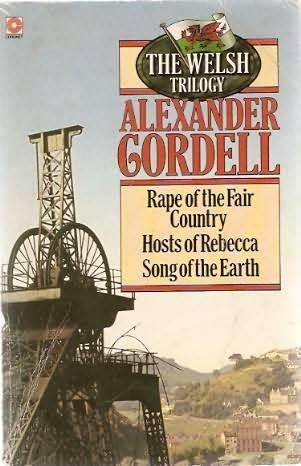 This book report covers both the last and the middle book, The Hosts of Rebecca, which I didn't get a chance to write about before I got lost in the third. Rebecca is about the changes in the agricultural lands with the gentry forming toll-road trusts and the resulting Rebecca riots inspired by an odd verse in the Bible:


And they blessed Rebekah, and said unto her, Thou art our sister, by thou the mother of thousands of millions and let thy seed possess the gate of those that hate them. Genesis 24:60.

The Welsh farmers would congregate in the night and disguise themselves in women's nightgowns and petticoats to appear as "Rebecca." They would tear down and burn the gates and toll-houses; catch piles of salmon forbidden to them by the gentry who claimed ownership of the river to rot on the river banks, fences, and doors of the wealthy; and administer a biblical form of vigilante justice to those who abused women.

With regard to the Rebecca Riots, a BBC History site states that in 1836, the laws on the official government church tithe were changed from "tithing in kind" to cash, thus placing a terrible burden on many poor farmers struggling to survive. And this is exactly the time-frame that my Welsh Family left Hay in Breconshire for the Industrial Valleys of the South!

While historical fiction, this series fleshes out the exact experiences of my family. In the books we see farmers, puddlers, drovers, canal workers, coal miners, emigrants, pugilists, preachers, and even Mormons - - everything that was happening in my Welsh family in the same years, the 1830s-50s.

Oh, and back to Granfer Ben. While absent, he hovers over the third volume as a positive presence:


"No finer man than your Granfer Ben walked in twin boots, and there's no apology for a man here fit to clean them!"

"Smitten with the tongues of angels, we are. Why the hell do we have to have Granfer Ben every time we have herrings do beat me," and he rose. "We will wash all tears from eyes. My father, Ben Evans, was the finest Falstaff in the Swansea theatre. . . ."

Granfer Ben played Falstaff! He also was a lover of books and left his family a few on his emigration to America. And he was a Drover - of geese!


". . . . a couple of geese he could manage, but when he was fifty miles out and eight up and couldn't be seen for beaks and feathers, your Granfer Ben started getting idears."

"Necessity being the mother of invention," said Gran.

"Aye, so he warmed pitch on the march and drove the geese through it on the hop, and then, adding insult to injury, he chased them through a bourne of sand, and when they came out they were soled and heeled."

As an editorial aside, these books were written in the 1950s, so there is a much more enlightened and positive views of Mormons then you usually hear from British Fiction. And this all rings pretty true to us who had Welsh pioneers who brought us here.

Now it isn't all fun and games and Granfer Ben. If you've seen "How Green Was My Valley," you know the basic outline of the Welsh stories. They don't all end well. Still, this series seems a bit more realistic in tone than the rather maudlin story told by young Roddy McDowall as Huw Morgan.

The third novel is fascinating in style. I was very confused for the first hundred pages or so because it was in the language of this story's young protagonist beginning at age eleven with no apparent connection to any characters in the previous two volumes (of a trilogy!). It wasn't until page 140 when I finally got the connection and then, as a good novelist should inspire, I went back and found vague references and characters I hadn't recognized as a continuation of the story. Oh yeah, my kind of novel!

And (I begin with some fearful trepidation), my kind of socialist politics.


Let further generations despise the tame historians, the crooked lackeys of the subscriber histories those who wheedled for favour and the owner's purse to set down the lie of how my generations died.

At the hands of coal and ironmasters who couldn't afford to lay a decent water supply in a land abundant with water, or lay a decent drain in a land of slope and incline; this is how they died.


The excitement grew within me, stronger and stronger, and I began to tremble. In my great emptiness there came a new vitality, a strength that flowed through me. And I saw before me not a land of defeat and exploitation, but a land of triumph. I saw in the scarred landscape and the tunnelled mountains not a desecration but the glory of their wealth. And I knew, standing there, staring up to The Top, that the smoke of this year of cruelty and oppression was the bonfires of future generations, that the old order would be swept away, the old slaveries buried in the mountainous heaps of slag that one day would be green again; that the rivers now black with furnace-washings would cleanse themselves for the lives of men and women yet unborn.

The front-piece of The Hosts of Rebecca quotes the American, born John Griffith Chaney, known as Jack London:


. . . I retain my belief in the nobility and excellence of the human. I believe that spiritual sweetness and unselfishness will conquer the gross gluttony of today. And last of all, my faith is in the working class. As some Frenchman has said, 'The stairway of time is ever echoing with the wooden shoe going up, the polished boot descending.

Oh, and I must mention the name of the beautiful, dark, Silurian-Welsh beauty of the final novel: