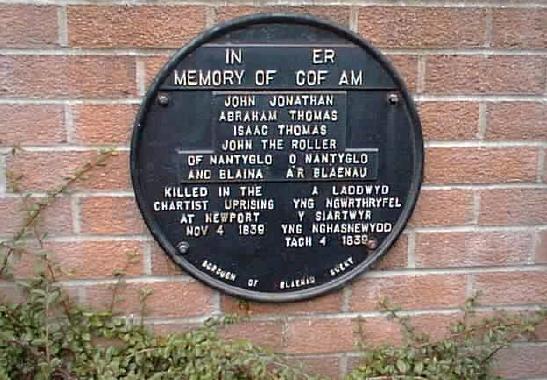 Above is a memorial to men killed in the Chartist Uprising of 1839. Many Survivors were convicted of crimes and sent to Van Diemen's Land - Tasmania, Australia.

The historical novel by Alexander Cordell hits close to the home of my ancestors at the forges on the other side of the Blorenge from Llanfoist where they lived. The forges are where they worked as puddlers.

It's still not known how they became puddlers in the midst of industrial turmoil and desperate poverty. It may have been that they were hired to replace striking workers like those demanding voting rights and parliamentary reform in the tragic assault on Newport - the characters in Cordell's historical novel. No sign yet that the Vaughans were involved in Chartism as they remained, alive, and not shipped to Australia - (except we're trying to track down one son-in-law, William Delahay, who disappears from the records in Wales and may have ended up there or in New South (very south) Wales. His wife, Catherine Vaughan, may have been baptized a Mormon. Elder Needham's journal is not clear on this point.)

I do recommend the book as a good historical novel especially if you have family from the area. Here's a taste as the family is leaving their home in Blaenavon to Nantyglo for work in another of the satanic iron mills. Outside the house, the neighbors began to sing in farewell:

Give me a hymn to a good Welsh tune to bring out the pride of race and love of country. The key is minor and the very breath of Wales. I thought of the mountains and valleys; of the great names of the north filled with magic; of Plynlymon, Snowdon, and Cader Idris, the mountain chair of the clouds, and the great flat tracts where the Roman legions formed; of ancient Brecon that still echoes the clash of alien swords; of Senny, and the Little England beyond Wales. I saw a vision of ancients long dead whose bones have kindled the fire of greatness; of Howell Harris and William Williams, great with the Word. I thought of my river, the Afon-Lwydd, that my father had fished in youth, with rod and line for the leaping salmon under the drooping alders. The alders, he said, that fringed the banks ten deep, planted by the wind of the mountains. But no salmon leap in the river now, for it is black with furnace washings and slag, and the great silver fish have been beaten back to the sea or gasped out their lives on sands of coal. No alders stand now for they have been chopped as fuel for the cold blast. Even the mountains are shells, groaning in their hollows of emptiness, trembling to the arrows of the pit-props in their sides, bellowing down the old workings that collapse in unseen dust five hundred feet below.

Plundered is my country, violated, raped.

On goes the hymn. The wind was playing tricks with hair and bonnet streamers, sniffing at the dew-drop on Willie Gwalter's nose, picking up the hem of Polly Morgan's skirt, bringing Owen's eyes down. From the window I saw it all and could have wept.

I knew then that I loved my town, my people, my country.

No spoilers here, but you ought to know about the strike-breakers and the poorly organized union enforcers - dressed in strange disguises as Scotch Cattle . . . .

Oh yeah, there's some weird stuff that went on in Wales.