The Glitch at the End of the World

When I got back in my office after the shutdown, there was a urgent message (one of many) from the Homeland Security folks that my government ID would expire on November 2, 2013. It gave me a link to the site I use every few years for my ID renewals. I went there and of course had no idea what my password was so after clicking the "forgot" button and creating a new one, I went in to make an appointment on their user-friendly calendar. It's at this place down on 21st South and Redwood Road so I have to arrange to go with someone with a car or skip the bus that day and drive in. Guess what? The first available appointment was December 2, 2013. Instant Catch-22 gonna get ya!

Gratefully, there was an email later that day from one of my work associates who had learned that the Bureau of Reclamation in our building had been given authority to designate an employee relations specialist to renew the ID cards. As we do work for that agency (who d'ya think did the title work for the land we flooded to fill Jordanelle?), they graciously let us go up there to renew. I went up with our Paralegal who had an appointment and they allowed me to squeeze in after her. I did run downstairs to see if I had written my password in my secret place (oops. You're not supposed to do that! But I have a couple of dozen or so just for work!) And it was not there. So thinking through it carefully and meeting the requirements they gave me to log in to activate the chip on my card, I came up with it! Yeah! And that only took about 15 minutes.

So I got to thinking about the rest of our government IT system.

I checked my government computer which I was glad to see does have "Pentium Inside." It also had a 3.5 floppy portal so that may come in handy. I looked closely to find it was manufactured in 2007 which isn't as bad as I thought it might have been. Of course, I have worn out one, almost two personal laptops and bought a smartphone just for myself since then - the feds do not even give me a cell-phone for work.

Probably because we are a national office, our server is located in Reston, Virginia which is convenient (I'm lapsing into sarcasm I hope you've noticed). Our IT staff is in DC, or maybe some are in Denver, but we have found some work-around arrangements with the BOR IT people (don't tell DC!)

I had another IT experience this week in completing my annual training to prevent fraud, waste, and abuse to get my commuter transit subsidy renewed. I had to take a little training course and then pass a test of 16 questions which were pretty easy, but still, I had to figure out another password (I know, some say to just keep using the same one for everything but some require just numbers, some are letters and numbers with no special characters, some require special characters, some prohibit special characters, and then they require you to change them on a regular basis at different times). Then I had to fill out two forms and have my boss sign and hand them to our Office Manager who sent me an email that there was one more form I needed to fill out. The transit subsidy program is to help us commute because we don't have parking and to cut down on federal impacts of traffic and pollution. Maybe that's socialism, I dunno. But we have to have the training so we can certify to Congress that we train to avoid fraud, waste, and abuse. (This is still the sarcastic part.)

Somehow, the government still seems to work and the people's business moves forward (ever been water-skiing on Jordanelle? Ever drink any water in Utah? Just sayin').

And I sure wish they would get that ACA website up and running soon. It's embarrassing! I don't think it's the end of the world, though. Do you know how many people signed up for Romneycare in Massachusetts in its first month? A whopping hundred-twenty-three (123). This is according to a cool chart from Ezra "Wonk" Klein: 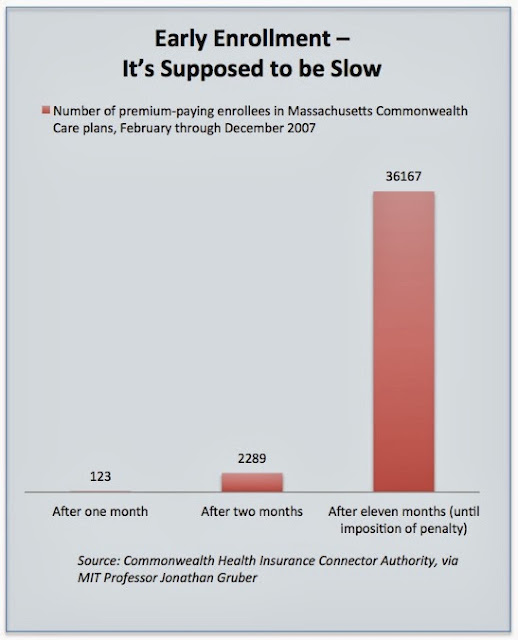 Yes, it's human nature to procrastinate until the deadline or even after. I just hope the world doesn't end first. (sarcasm.)
at 6:48 PM