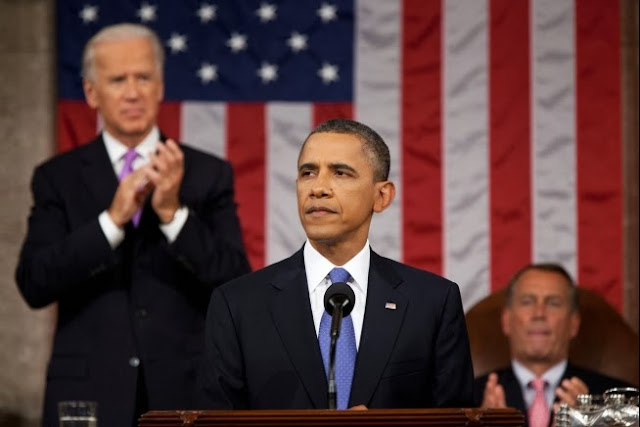 Still trying to synthesize my basic political thoughts into bumper-sticker phrases or at least Twitter-length, I was mulling over something along the lines of:


You can't negotiate with someone who challenges your legitimacy as President

Yes, bumper-size fail. But it is congealing into the big picture.

The President it on the verge of a major political, personal, and even progressive victory. He will finally be the President of the United States.


Sure, technically he has been since January of 2009. There are many, though, who have had a hard time excepting that. Some of them are attempting to run Congress right now, but have succeeding in nothing more than running the Peoples' government into the ground as they push the accelerator to take the whole world economy hurtling off the edge of the Grand Canyon. (Sorry, closed.)

You can argue all you want about how mean the Liberals and Moderates were to W. Bush. There has never been any attempt this severe to delegitimatize a President since, well, maybe Andrew Johnson* (who followed Lincoln. Lincoln and his opposition are a whole other thing). While true they haven't yet attempted to impeach President Obama because he hasn't given them any good fodder or even personal sex-scandals, they are still coming up with these kinds of things:


He rammed Obamacare down the throats of Congress and the American People.
He and his cronies are a bunch of Chicago Gangsters.
His kool-aid-drinking supporters treat him like a "Messiah."
All he can do is give a good speech.
He is inexperienced.
He is in over his head.

Those criticisms may very well be true even if the emphasis or even accuracy is a bit subjective based on political preferences. But then there are these:


He only won by promising all the lazy welfare-people free "obama-phones."
He disrespects the People of America, especially WWII Veterans.
Rampant voter-fraud, led by ACORN, got him elected, twice.
His education and success in life is only due to Affirmative Action.
He does not respect the Judeo-Christian values of America

Then, one-step further, are these:


He is not a US Citizen.
He was born in Kenya/Indonesia.
He is a secret member of al queda.
He is a secret Muslim (even some believing he is a declared Muslim).
He is "the Beast," (or satan himself)
He wants to provide reparations for Slavery and enslave Whites.
He is an uppity Negro who should know his place is not in the White House. (oops. How did that get in here? This has never been said by anyone!)

My point is that every additional day that Barack Obama is President of the United States, these positions above decrease in power and legitimacy. And his position in history, if only for him and the Constitutional Union to survive, will be further legitimatized.
at 8:50 AM