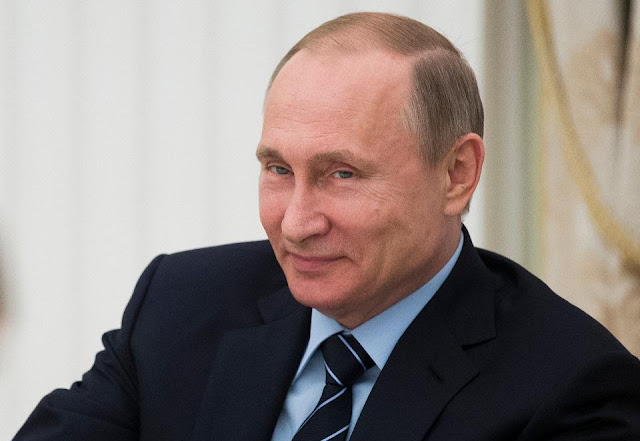 We may never know what is real or unreal, fake or not news. But this we know. Vladimir Putin, former KGB Agent and Tzar-like leader of Russia, has done what the Soviet Union was never able to accomplish. American Democracy is suspect, our First Amendment protected Free Press is completely unreliable, and our intelligence agencies are compromised.

Oh.My.Heck! How did we get here?

I can't explain it.

There are a few items falling out after that really weird tele-novela today in which the President Elect had his staffers boo and ridicule the press. And the CNN reporter fell right into the President Elect's small but grabby hands as he squeezed the "fake news" right out of him.

But get this! The Law Firm the President-Elect had up front to farcically obfuscate how financial conflicts will only appear to be avoided because the President Elect's kids will run his businesses recently won a major award-- Russia Law Firm of the year!

You can't make this up even if you were doing fake news!


Russia Law Firm of the Year

This active Moscow office of an American firm offers top-level advice in regards to the energy sector and also houses very strong banking and M&A teams. Its in-depth sectoral expertise also includes TMT and private equity. Among recent highlights, the firm advised CTC Media on the sale of its Russian operating business to Russian investors. Another significant instruction was representing Russia-Chinа Investment Fund in its 9.75 billion RUB acquisition of a minority stake in Detsky Mir from Sistema Group.


Now the the allegations are out there, totally unsubstantiated and possibly faked. Still, the world renowned fake news site of the British Broadcasting System (BBC 4) says there may be more to this story:

And then there's video of Trump from 2001 yucking it up on the Howard Stern show about immoral behavior with Russians.

And for the final news of the day, Reuters, hardly a fake news source or one to take sides in U.S. internal politics, is reporting and naming names that Russian officials claim to have been in contact with the President Elect's campaign team on numerous occasions.

The President Elect says he has nothing to do with Russia. Unfake news says otherwise.

The choice is ours.

Or the turmoil of a nation's self-destruction brought on by our enemies.
at 11:34 PM