It's Martin Luther King, Jr. Day. And Harriet Tubman will soon grace our twenty dollar bill. I rejoice as we've been friends for almost 50 years.

Scholastic Book Services was one of the great blessings of my childhood. My Mom loved reading and always scraped up some spare change to allow me one or two from the tantalizing list of books that my teachers at Thoreau Elementary gave me. In 1968, I believe in the Fifth Grade at 11 years of age, I chose a great one. 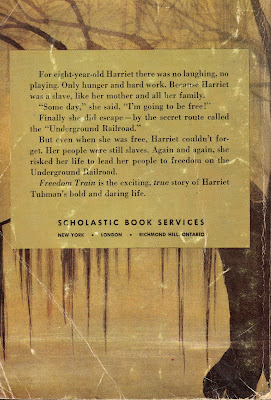 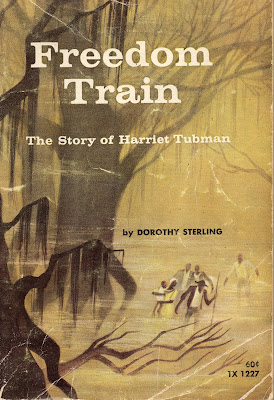 My provenance for ownership and the date is the 1st Printing . . . 1968 indicated and my signature on the inside title page:

I was already interested in history and I believe that it was before this time that The American Heritage Picture History of The Civil War, by Bruce Catton (1965) had captured my attention in the public library.

Harriet Tubman had a great influence on me. And after reading her story, I could never have sympathy for the southern cause.

You can still get this book which I highly recommend. It appears it may be used in some grade schools today. That would be truly inspired.

Here's an excerpt [spoilers, but I think that's OK with a historical classic] within limits of a reviewer's transcription:


"Tell us about the war, Aunt Harriet," her great-grandnieces and nephews begged. The Spanish-American War had come and gone, but "the war" in Harriet Tubman's household meant the war for freedom of the slaves.

Rocking back and forth in her wheel chair, Harriet sang "John Brown's Body" and "Go Down Moses." She pounded out the rhythm on her knees or clapped her hands as she went through verse after verse.

"And then, children, I crawled along my belly like a snake." Now she was describing how she hid from Rebel sentries. Before her audience realize her intent, she had slipped from her chair and was gliding over the grass in her garden, dragging her crippled legs behind her.

"That's the way the Indians used to do it. Learned that from my daddy when I was 'bout your age."

It was not until the winter of 1913 when she was, by her own estimate, ninety-three years old, that Harriet agreed to remain in bed. Even then she received visitors in her room and had the newspapers read to her daily. As she followed the news of the suffragettes who were close to winning the right to vote, she sent a message to the women to "stand together."

Early in March, her breathing became rough and her bright eyes glazed with fever. "It's the pneumonia, isn't it, Doctor?" Her voice was faint but steady.

"Tell William Henry. He knows what people to bring to say good-bye. And the minister."

With her friends around her, Harriet joined in a prayer. "Now a song," she whispered

Her thin hands waved feebly as she led the group in singing:

Swing low, sweet chariot,
Comin' for to carry me home.


It was dusk, and the North Star was shining in the darkening sky, when her eyes closed for the last time.

And from another book I came to know:


It is not right that any man or woman should be in bondage one to another. And for this purpose have I established the Constitution of this land, by the hands of wise men whom I raised up unto this very purpose, and redeemed the land by the shedding of blood.