Some Kind Words for Trump Voters

There are those explanations on social media as to why liberal-minded souls are upset, hurt, and angry at their Trump-supporter friends and family. They are sincere about the concept that if you voted for the vile man who spouted and acted out such ugly views of the disabled, women, ethnic, racial, and religious minorities, etc., you  must be insensitive or complicit in such things. Let me take a slightly different tack.

One reason why we progressive, anti-Trump voters are so upset is that the election result was such a shock to our very being. Admit it. The results were a surprise to nearly everyone.

For myself, I was not a big fan of Hillary Clinton. I think you can see that in this blog especially if you go back to see some posts when I was supporting Bernie Sanders in the Primaries (although a Joe Biden would have been my ideal choice). After she locked up the nomination, I tried to support her to the best of my ability as a loyal Democrat agreeing with her on most issues. And my biggest issue was that she was the best and only chance to defeat the Republican nominee, the man for all malfeasons  [OK, I just made up a word. If Shakespeare can do it, I can, even if not as well].

So here's my idea.
I think many Trump voters were registering a protest against Hillary while fully expecting her to win. That would go for a lot of Republicans and likely many of the Blue-collar, working-class Democrats particularly in the swing states. I haven't seen any studies that bear this out, but I do know some people around here who appear to have voted for Trump who were not happy with him more so than I was not happy with Hillary but felt the need and maybe party loyalty to vote for Trump.

Reagan-Democrats, working-class Americans, many of whom voted for President Obama, may have been just enough of an anti-Hillary, even anti-Clinton crowd (we shouldn't leave the distaste for Bill's issues out of this) to swing the election in those close states of the rust belt.

And for all the distaste, even disgust I have for the President Elect, along with many elected officials in his party, I have to give the reality TV star the credit that he is smart enough to play the crowd. He's had a lot of experience at it. And he won this thing on some very strategic thinking and playing to the audience of the disaffected and the anti-Clintonites. Of course Putin helped along with FBI Director Comey who I believe will soon be going down in infamy.

The problem is that he played the game beyond TV-reality-show entertainment delving into the dark angels of the American soul to play the demagogue. Yep. I think he was even surprised by the result. And he played the demagogue well and still is.

Beware, be very aware of how he is playing to the crowd, the ugly mob-o-cratic crowd of emotionally sick, gut response. He's also playing us progressives stirring us into a frenzy before he even takes office.

The good that may come of that is there will be no honeymoon. It took the bank bailout (actually signed by W. Bush), the stimulus package (including its 1/3 as Republican inspired tax cuts), and finally the Affordable Care Act to get the tea party and anti-Obama crowd fully going. We don't have to wait a year. We are already organizing. We have guidebooks and plans. We have a mission.

This is where the rubber of Democracy is hitting the road, sidewalks, and congressional offices of America. It took this defeat to mobilize organization on the left with a clear goal in mind to fight Trump every step of the way. This is how Democracy survives. For every action there is an opposite reaction. Let's see who is equal to the task. 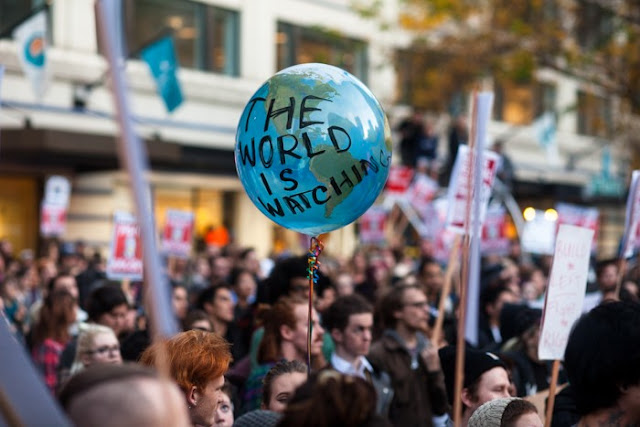