From Song of the Earth by Alexander Cordell. It's about 1850 on Lyon Street in Resolven, Vale of Neath, Wales. The father, Mostyn, comes home from the coal mine to find Redcoats in his house looking for his son:


The Redcoat smiled and shifted his feet. There was about him a quiet authority more usually found in their officers, and he was not without charm. He could have handled this in a much more brutal way for he held the power of life and death over the Welsh workers. In the Top Towns, where the owners called in the military to break a strike, I have seen the Welsh flung out of their homes, their women man-handled. Time was, In Crawshay's Merthyr, when a troop had only to cut a dog in half to get obedience, or hang an innocent Dic Penderyn, but he Bread or Blood riots of '31, and the rise of the Welsh Chartists in '39 had changed the face of their authority. Yet they still demanded instant loyalty to their puppet Queen, and this, usually, was the test of Welsh fidelity. The sergeant said now, 'You are aware that your son is a member of illegal organisations?' [unions]

'if he is, then he is responsible.'


[The questioning and dodging went on.]


. . . . The sergeant straightened, and I knew him instantly for a trainee officer: no fool, this one; he had carefully laid the trap, and we knew what was coming. This was how they divided the patriot Welsh from the traitor Welsh. If they wanted a man for questioning and could not get him, this was how they took the hostage. The sergeant said, taking out his note-book. 'One last question, Mostyn Evan, and be careful how you reply. You agree that your are answerable, on oath, to the Queen, to whom you owe allegiance?'

'I owe allegiance to none save my Welsh Prince,' said my father, 'and he died at her hands six hundred years ago.'

'Excellent,' said the sergeant, replacing his note-book. He nodded to the soldier by the gate, 'Take him,' he said.

. . . .  And on the third day after his going, Ifor and I waited outside Brecon Barracks, which was the place of questioning, and the gates opened and closed and my father stood there on the cobbles. His eyes were blackened, his lips were split, but there was no weariness in him.

. . . . 'Ifor cried at the gates then, his fists high, 'You bastards, you bloody English bastards!'

'There is no point in rubbing it in,' said my father. 'Home now--come, Ifor--home, the three of us.'

We took the road to Sarn Helen, and we did not speak again, as far as I can remember.

This, along with my earlier American ancestors who fought the Redcoats, is why I could never be a British subject. Over there I would be a republican. There's nothing like a 600-700 year old grudge.

The Prince was Llewelyn ap Guffudd, grandson of Llewelyn the Great and son-in-law of Simon de Montfort. He is also know as Llwelyn ein Llyw Olaf or "Llewelyn the Last." He was killed by an English soldier just a few miles north of Brecon, up the River Wye west from Glasbury and then on up the Irfon.

This is why I rise. This is why I stand with the working man and woman and the poor of the earth who stand and turn the cheek to the smiters. And why I reject the rich, tyrant bastards.

That goes for you, Donald Trump. 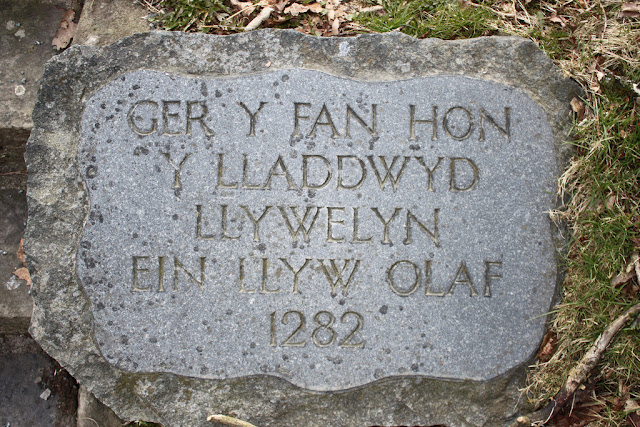 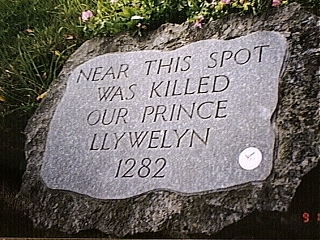