My Declaration of Opposition to Trump

States Rights has given us Slavery along with the 3/5 Compromise, the Electoral College, and Two Senators for every State. This resulted in the Civil War, Jim Crow, Segregation, and now, Donald Trump. As Joseph Smith said [paraphrased] States Rights Stink!

Slavery and the 3/5 Compromise have been banned and repealed by Amendments to the Constitution. Since the 17th Amendment, Senators are at least directly elected by the people of the states rather than the State Legislatures (thank Heavens!) The Electoral College serves no purpose if not needed to protect Slavery [thank Heavens again!]. There was some talk by the Founders that it would serve as a check to the election of a demagogue. 2016 establishes the failure of that idea with the irrationality of the faithless electors of 2016 who demonstrated no coherent plan to stop a demagogue.

And let's not forget why a President Trump would be such a problem:


1. He campaigned on an angry, populist, racist, anti-immigrant, anti-refugee, misogynistic, homophobic, and anti-First Amendment campaign (attacking minority religions, the press, and the free-speech rights of many). Some of his supporters now say it was all just talk and he shouldn't be taken seriously. So then he's a liar. Whatever actions ensue, the rhetoric was enough to make him a demagogue.

2. He has claims of vast wealth and even debt that is not fully known because he won't reveal his tax returns or full financial disclosures of what he owns and owes. As a federal employee, I have to fill out a financial statement every year and I am prohibited from certain property holdings such as interests in mining and grazing on public lands. The President of the United States is exempt from some conflict-of-interest laws, but not completely. And even if the disclosure of tax returns is voluntary and not legally required, Trump claims to be wealthier and has disclosed less than any president in modern history. He claims he will take care of this before he becomes president. All he has done is dodge and weave in a classic shell game of the carnival huckster or the capitalist exploiter. We do know that he uses his name as a brand all over the world where he will have to act as our president and hopefully not in his self-interest which seems nearly impossible.

3. Trump has no practical experience to be president. He has never held elective office. He has never held appointed office of responsibility in government. Some of his supporters see this as a plus. They don't like government. Hardly anybody likes being told what to do or to pay taxes, but the responsible, mature citizens understand their obligations to participate in representative government, holding elected officials responsible, and assuming their civic responsibilities. Business management is not the same as Government.

4. Despicable. Deplorable. Trump is a disgusting human being. For the past eight years we've heard the most outrageously false accusations about a very good family man serving as President. He happens to be a Christian and evidences it in word and deed. Religion shouldn't be a consideration under the Constitution. But U.S. birth is a constitutional requirement and Trump was one of the shrillest voices in the false and unsubstantiated rumor-mongering about President Obama who was born in the State of Hawaii as a U.S. Citizen. In this Trump inherits the mantle of the birther wing of the tea party and the brazenness of demagoguery.

These are the basics. I don't have the words or ability to adequately describe all the problems Trump as president represents. Much of this is emotional, I admit. But I'm pretty sure I'm on the right side of history in opposition to Trump.

From my readings around the internets and webs, I have a few suggestions:


1. A good source for watching the financial problems of a President Trump appears to be Jedd Legum of Think Progress. This is probably the second most important issue as Trump seems determined to profit from the presidency turning our government into a kleptocracy in the model of Putin's Russia.

2. The most dangerous issue is world peace as Trump has no diplomatic or foreign experience (beyond dealing in money and debt) and has severe prejudices and irrational off-the-cuff responses in dealing with current events as they happen. Watch and pray for the U.S. Senate to reign him in and keep him in check. It's our only hope. In my theory of the Constitution, the President has just enough vague authority in Art. II to get away with as much as Commander in Chief as the Congress will let him. Hold him and them accountable.

3. An oddly distracting issue is the tweeting. He may be more devious about this than it first appears. Often the tweets seem designed to distract from bigger issues. Keep your eyes on what he does and not what he says. Still, what he says is important and the platform is inappropriate for the President of the United States. It is not so for the rest of us. Keep expressing your thoughts, opinions, and free speech. He can't control us all if we keep it up.

4. Related to the tweeting and the international risks is the very thin skin on the President Elect. He makes many things personal and raises the slightest criticisms to major circus atmosphere. It may be possible the the legions of his opponents to distract him by cutting criticism of his person. The more he focuses on self, which comes naturally to him, the more he may be distracted from doing real harm to the rest of us.


Much confusion and raw emotion still rages in my mind and I don't have many answers.

For myself, I have joined the American Civil Liberties Union (ACLU). They are one of the best legal checks on abuses of basic constitutional and human rights. Their membership has surged since the election. Just the mention of the name often sends conservatives into hysterics.

I will continue to blog and tweet and share what I think is important and sometimes humorous.

I remain a member of the Democratic Party of the United States with great hope for its future as it re-establishes its soul in the hearts of the people of America--the working man and woman, the truly best and the brightest along with the disadvantaged and dispossessed, with the ideals of the Constitution foremost as clearly expressed in its Preamble--not the manipulative modern interpretations of founder-psychology to serve conservative and corporate aims. It needs to be government of, by, and for the people and we have a long way to go.

I will continue, for the time being, my employment with the U.S. Department of the Interior. Remember, I do not speak for the Department or the U.S. government. The civil service is supposed to be above politics providing the bureaucratic, scientific, and legal services for elected officials to fulfill their policies for the people in accordance with the Constitution and the LAW.

I will do my duty. I will not break the law. And I will fight.

I swore an oath: 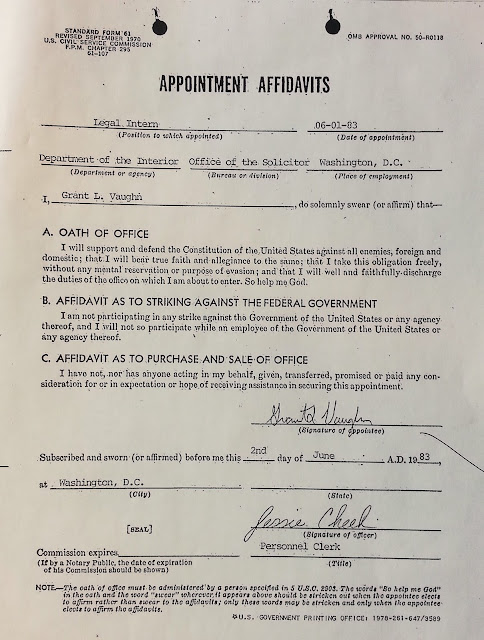