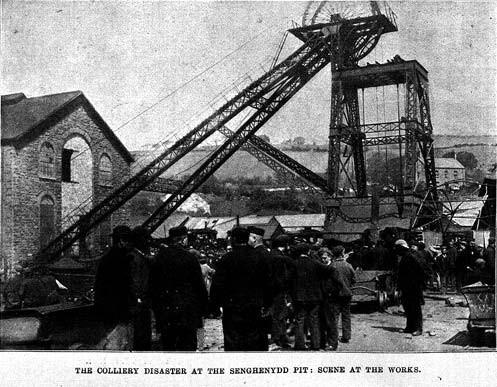 My mistake in the previous post was not to recognize that the new memorial to miners killed in the Welsh mines, dedicated on the 100th Anniversary of the 1913 Senghenydd Explosion, also included the victims of the 1901 Senghenydd Universal Mine Disaster.

Searching for a David Vaughan who possibly died in 1913 and born 39 years earlier led me on several false trails, one even to a David Vaughan who went to Utah and is buried in Provo! When I finally realized the right dates, it still took some work but then it all fit with a David Vaughan born in Cwmdu from a family from Llangors that I have already researched. They are somehow related to my Vaughans, but the connection appears to be 17th Century or earlier and I haven't yet found confirming records.

We did visit the beautiful church in Cwmdu with its huge yew trees and the Tegernacus Stone, a seventh century (!) Christian burial marker. Cwmdu, meaning "Black Valley" as it lies in the Black Mountains or Y Mynnyddoedd Dduon of  South Wales, although I much prefer the name of the stream, Y Rhiangoll, the Brook of the Singing Birds.
Cwmdu is an ancient home of the Vaughans from even before they were Vaughans. Medieval Vaughans returned to the Valley in great success establishing the Manor at Tretower just downstream. There is also an ancient three-meter-high, standing stone in the fields between Tretower and Cwmdu. Oh yeah, we go way back even if we seem to have fallen out of the gentry.

So I was glad to find the origins of David Vaughan, a victim of the mining disaster in the Aber Valley. I hooked into his family on Ancestry.com and then on FamilySearch.org where someone is in process of doing his Temple work. They did not have the additional information on his wife and children that I was able to provide along with the details of his horrific death. So, yes, that's another family history miracle if you see things the way I do.

His death was apparently quite gruesome as the Welsh newspaper I found indicates his body was not recovered. The 1901 disaster only killed eighty-some miners, much less than the 440 in 1913. But it was no less horrific as the mine was smaller in those days and there was only one survivor, a man named Harris who was lucky enough to have a horse fall on him as it died venting its bladder which extinguished the fire on and around Harris's body. There are horrible ways to die and unpleasant ways to survive, but surviving under most circumstances is usually preferred.

My greatest success is my first translation of a Welsh newspaper article. This is from Yr Herald Cymraeg of 4 June 1901. Google Translate certainly helped, but I still had to interpret much from that and transposing the same meaning into English without losing the sense of the original language is the hardest challenge of translation. I probably did pretty well as I only know four or so people who could even correct me. If there are any other Welsh readers out there, I'm willing to accept correction. The main trouble I had was the word cyrph which I could not find anywhere and Google couldn't handle. I'm only guessing from context and looks that it means "corpse" and I much prefer "body" in English. Anyway, here's my attempt:

SENGHENYDD DISASTER
RAISING THE BODIES FROM THE MINE
THE BURIAL
The task of searching for the bodies began Tuesday. One group of searchers informed that they had found six bodies. There was one man who had obviously tried to run for his life, because his lamp was found in the work place, while he had moved forward, sacrificing himself in the gas. In the Pretoria Section, they had passed the night and fought the gas that condensed and added to the acceleration. They found that they had fallen in horror.
Wednesday, the small village gathered in mourning to bury fifteen of the poor men. Most were buried in the Church Cemetery, a distance of approximately four miles, the procession of mourners nearly two miles in length. A correspondent reported that 65 bodies were brought up by Thursday. So it was 19 still down [unrecovered]. Harris, the only survivor, continues in critical condition.
At a meeting of the local [union] committee specially presided over by Mr. Beynon Evans, it was observed that the good workers knew what improvements [?] were needed, and that they were still needed.
Mr. Alfred Thomas, A.S. gave 50 pence to aid victims.
Amazing efforts were accomplished for the dead underground on Thursday, but the searchers came from the workings discouraged.
It was reported Saturday that Harris is improving and came to himself for a while Friday, when he recognized his mother and other relatives.
Seven additional bodies were still sought for Friday night.
In addition to the names of the men entombed in the mine from our last edition, add seven more: David Vaughan, 45, High street, Aber[tridwr]; William Rowlands, Caerphilly-road; Albert Lewis, 12, The Huts; T. Dobson, Cilfynidd gynt; William Morgan, Aber; Lewis Huxley, Grove-terrace; George Evans, Caerphilly.
at 1:35 PM