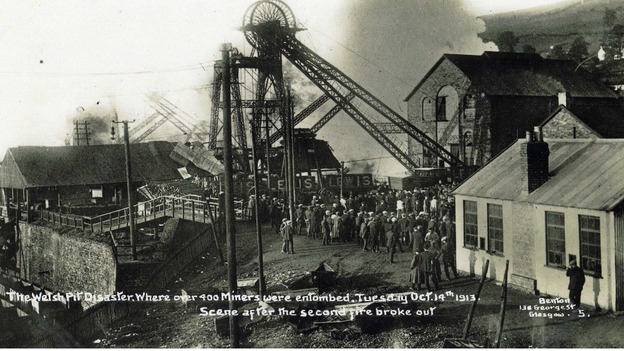 There are spoilers in the post title and more coming. As the book is out of print and hard to find, I think that's OK. I found my copy searching Amazon used and Abe Books; the latter is the best for British publications. And I'm glad I don't know all the details of Welsh History before I pick up these books. It helps bring it all home to me or at least to look on it as it is my ancestral abode. And it does come home: 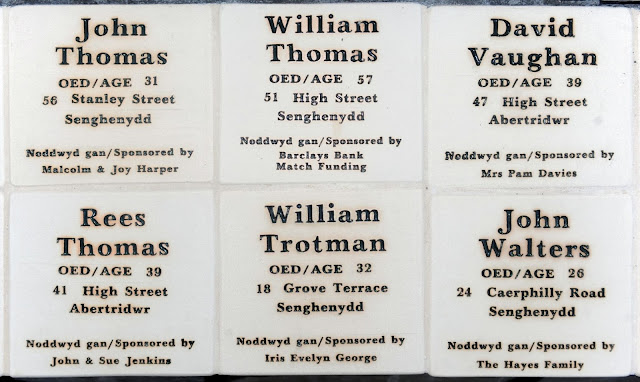 A new monument commemorating all the 440 lives lost was unveiled on the 100th Anniversary of the disaster. A Welsh Newspaper urged every Welsh person to read the names and details on the tiles for each of the dead "because only in understanding the number of individual tragedies that occurred at Senghenydd can we truly appreciate the scale of the disaster."

It might also be because nearly every Welsh surname I know of appears on the tiles. I can't find information on Ancestry or FamilySearch for this David Vaughan who appears with mine. So it prompts me to more research. My people were and are in those valleys.

In this book, Cordell successfully weaves the stories of fictional characters into the true historical events. I could see that something was coming for the end of the book which was the disaster in Senghenydd, but it starts with the suffering of the three-year strike at the slate quarry at Penrhyn in the north of Wales.
I learned a new Welsh word, bradwr, "traitor" as the Union Men called the strike-breakers. It's oddly close to brawd for "brother" as a brawd bradwr reappears towards the end of the novel.

440 dead in one industrial accident is horrific. Coal mining has always been inherently dangerous. If not crushed, drowned, or blown-up, there were few old coal-miners as the black-lung disease came. The slate quarry men had the same trouble with dust leading to silicosis if they hadn't been blown-up or fallen onto jagged slate slicing through them into bloody pieces.

I've had professional experience dealing with the recent Crandall Mine disaster in Utah. So I won't be talking about that. The worst coal mining accident in Utah was the Scofield mine in 1900 with more than two hundred dead. It was the worst mine disaster in the U.S. to that time. Yes, the victims were mostly from Wales. The Scofield and Senghenydd disasters were also similar in the series of explosions of methane and coal dust resulting in deaths by fire, crushing, and poisonous air.

I have become more radicalized by reading Welsh history. How can anyone argue that "free markets" work in the capitalist exploitation of poverty-striken miners subject to such horror. Unions even get a bad rap these days in the U.S. There may have been selfish financial abuses in them as well, but what else is there to protect the workers other than their own Union and democratically created laws to regulate the abuses of profit at the expense of human life? 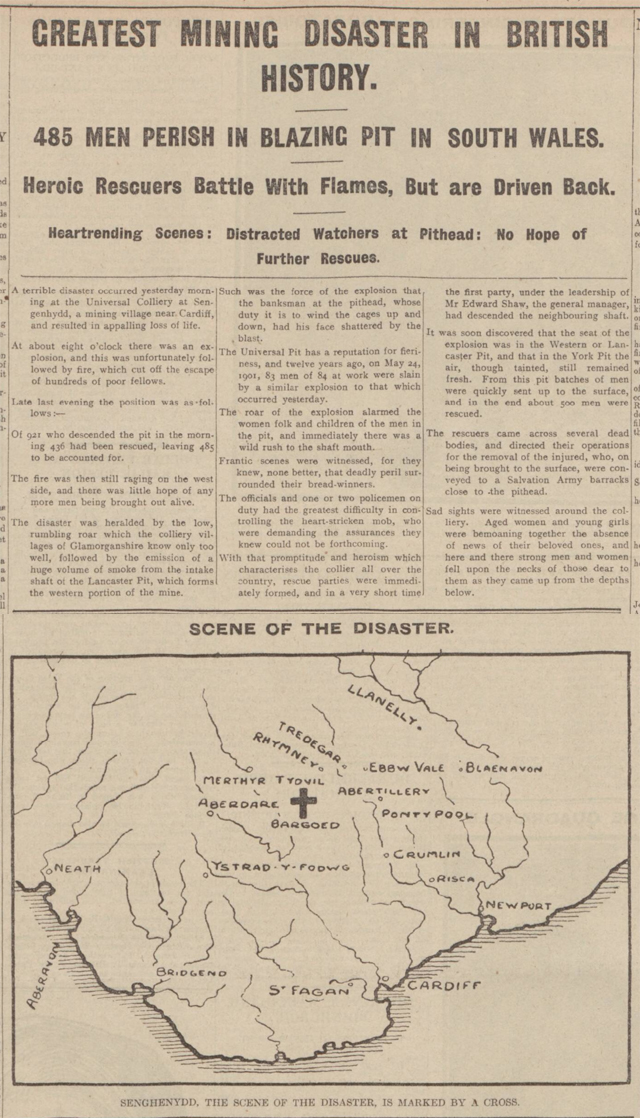 Oh, yeah. British law at the time, in the 20th Century, required compensation to the families for the loss of life.

The £24 fine imposed on the manager produced the headline 'Miners' Lives at 1s 1½d'. The acquittal of the owners was challenged through the courts; they were eventually fined £10 with £5 5s costs. William Hyatt, a miner who survived the explosion, commented: 'my father always said there was more fuss if a horse was killed underground than if a man was killed. Men came cheap - they had to buy horses.'