In the category of "I'm-surprised-to-learn-something-new-every-day," the first ever red flag raised as a symbol of social reform in the name of the working man (and woman, even at that time) was in the protest of 1831 when coal miners and iron workers dipped a white flag in goat's blood and waived it as a symbol of their cause against the wealthy mine owners and iron masters of South Wales.

"Merthyr Rising" is the name given for this short-lived movement. The red flag of the nascent unions and social reforms was yet to be associated with Marxism or even Socialism which as an economic/political theory was only just beginning.

Yes, there had been violent revolutions for representative government and "liberty, equality, and fraternity" in the former British Colonies in America and the French Revolution respectively. There had even been workers' protests in South Wales. But this was the first historically documented use of the red flag as part of a social movement.
I'm not in any way promoting modern ,or 20th, or even 19th Century Marxism. This is before any of those movements or revolutions leading to eventual dictatorship. This was a workers' movement rising from the vast disparities of wealth between the owners and the workers.

As an example, here is Cyfarthfa Castle built in the 1820s by the Crawshay Family of Iron wealth:

And a visual recreation of where the workers of Merthyr Tydfil lived in the same era:

The BBC describes the living conditions of the workers in the worst of the Merthyr slums:

There were no toilets; the streets were open sewers; people were infested with lice and in such overcrowded conditions infections and diseases such as typhus, dysentery and cholera spread at terrifying speed.

And Crawshay was the most reform-minded of the masters!

Back to our story. The latest book finished is Alexander Cordell's The Fire People. This is Cordell's attempt at historical fiction to describe the Merthyr Rising and its Martyr, Dic Penderyn. The book's prose is initially a bit stilted as Cordell tries to create a narrative of actual, historical people from a very sparse historical record. The book picks up as it goes with the events and personalities leading to the tragedy.

The Rising was initially successful with the mob of laid-off, maimed, or working poor actually taking the city of Merthyr with the British Regiment of Highlanders fleeing from thousands of workers armed with sticks, bricks, picks, and shovels. And as in most revolutions, what then? The workers had no clear plan and the demands ranged from a restoration of employment at previous wage rates, a 10 percent across-the-board wage increase, to a march on London to dethrone the King. They all disbanded when more British Troops marched on the city.


It is important to remember as Cordell references in his narrative that "Merthyr" means "Martyr" in Welsh. And the ancient Saint Tydfil is replaced by the modern martyr of the working classes, Richard Lewis, known as Dic Penderyn because, well, there were a lot of Lewises in South Wales.

Someone, maybe Dic, but the historical record is very muddy, stabbed a British soldier with a stolen bayonet. That was the principal injury to the British before the troops fled. Forget the Regiment firing on the crowd from the Castle Inn where the owners were gathered. Hundreds of the protesters were wounded; a few, maybe two dozen died. Solid numbers are impossible to come by because all the wounded were presumed guilty of treason and the dead were secretly buried to protect their families from the same accusations.

The King and Lord Melbourne, Home Secretary later PM, needed a scapegoat and Dic Penderyn's neck snapped on the gallows as the new Martyr of Merthyr.

I'm no revolutionary and there is no evidence yet that any of my direct ancestors played a part in the Rising, but on my next trip to Wales, hopefully this summer, I will pause in Cardiff at the site of Penderyn's death, doff my flat cap and pay my respects. 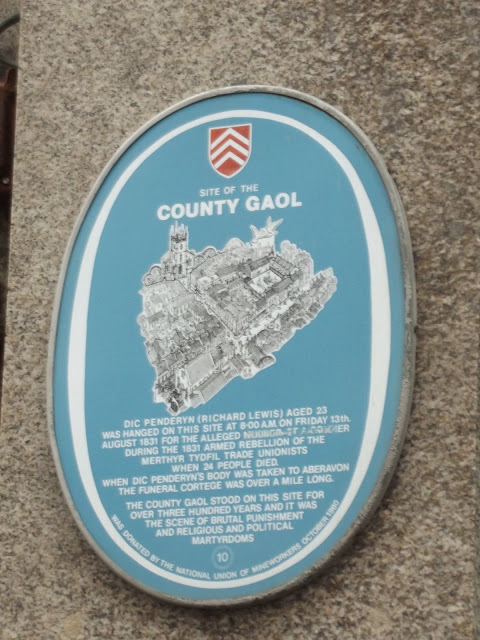