There was news this week of an amazing archaeological discovery in Jerusalem. A personal seal of King Hezekiah of Judah (about 739-687 BC) imprinted in clay.

According to Hebrew University, the writing says, "Belonging to Hezekiah [son of]Ahaz King of Judah." It depicts a winged sun with ankhs on either side. On the reverse there is evidence of strands of binding that likely went around some document. 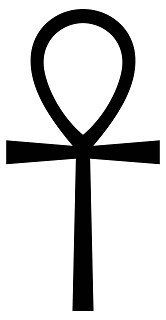 The image of the ankh really astounded me. I knew it from my grade school fascination with King Tutankhamen and all things Egyptian. (There it is again right in the middle of King Tut's name!)  It is the symbol for "life." As it is often associated with gods, pharaohs, and funerary ceremonies (as most things are in Egypt), it is a symbol of "eternal life."

The winged sun is pretty interesting itself. It doesn't take a lot of extrapolation to interpret a celestial sun directed upward flanked by symbols of eternal life. Tell me if I'm stretching any here.

I'm no Hebrew expert so I have to trust the translation of the ancient script provided. The mix of Hebrew letters and Egyptians symbols are no surprise for the historical era as Egypt was rather dominant in the region with the Kingdom of Judah squeezed between it and Assyria.

And as much as I hate apologetics, I love Hugh Nibley. Am I going too far to notice "the learning of the Jews and the language of the Egyptians?"

Back to the Bible to refresh myself because I don't have it all on the tip of my tongue, I had time in the Temple last night between my assignments at the veil to read about King Hezekiah in the Bible Dictionary which led me to all the right chapters of Chronicles, Kings, and Isaiah. Yeah, he was king when Isaiah was the Prophet!

King Hezikiah was one of the few good kings in the Old Testament. He reformed the religion to center it in the Temple in Jerusalem which may have been influenced by seeing the Northern Kingdom of Israel carried off into captivity.

He withstood sieges by being smart and righteous. He is the one who had the Tunnel of Siloam dug through solid rock to provide water access within the walled city to better withstand a siege. The tunnel still exists and an inscription states:

... the tunnel ... and this is the story of the tunnel while ...
the axes were against each other and while three cubits were left to cut? ... the voice of a man ...
called to his counterpart, (for) there was ZADA in the rock, on the right ... and on the day of the
tunnel (being finished) the stonecutters struck each man towards his counterpart, ax against ax and flowed
water from the source to the pool for 1,200 cubits. and 100?
cubits was the height over the head of the stonecutters ...

That is an amazing engineering feat!

The righteous part is that when the city was besieged by the Assyrian Army, King Hezikiah's messengers responded in defiance to the messengers of the Assyrian King (think medieval castle taunting). And King Hezekiah took the message from the Assyrian King and placed in on the altar of the Temple and prayed for God to deliver them from the siege. Isaiah told him the Lord had heard his prayer and an Angel was sent through the Assyrian camp and slayed several thousand of them. The interesting thing is that this is pretty much confirmed with the ancient records of the Assyrians with the plague that swept through their army. Pretty remarkable all around.

You should probably draw your own lessons here. But it worked for righteous Hezekiah to call upon the Lord in the Temple to aid him with his challenges. Isaiah also informed the King that while he would live out his days in righteousness and honor, it wouldn't go so well for his descendants eventually carried captive into Babylon.

Yet, Isaiah promised a remnant of Judah would return. I'm glad there are some there now. And I'm glad the remnant of Ephraim is still building Temples.
at 7:44 AM