Keeping the "Merry" in "X-Mass"

I get so tired of the phony "Christmas Wars." There is no war on Christmas. It is not only constitutionally protected by the First Amendment free exercise clause but is a legal, federal holiday since the time of President Grant. (Please see, Federal Holidays: Evolution and Application, (CRS Report for Congress, 98-301 GOV, The Library of Congress, updated February 8, 1999).

The only contrarian stirrings are that the establishment clause does not allow Christians in governmental authority to impose Christmas upon others against their free will and freedom to worship or not as they see fit. So some non-Christians, and freedom-loving Christians alike, oppose state-sanctioned religious displays and expressions as a violation of the establishment clause. The last thing we want is government in charge of Religion - think about it. 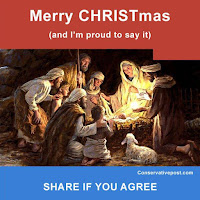 A recent meme from the conservative side stirring up the wars is this example of "Christian-Conservative Pride" which gives me (a believing and practicing Christian) a real turn-off with regard to conservatism and certain forms of Christianity. It appears to be rather "in-your-face" and I don't recall a lot of pride manifest in that humble stable and the shepherds at the first Christmas.

I actually have some concern about the over-use and over-commercialization of the sacred name of Christ in the out-of-control excesses of the holiday, be they money-grubbing or political. That's one reason why I have no problem with the substitution of the "X" for "Christ" in the holiday originating from the Catholic Mass occurring in December to celebrate the Savior's birth. As good ol' St. Wikipedia tells us:


"X" comes from the Greek letter Chi, which is the first letter of the Greek word Χριστός which comes into English as "Christ".[2]

There is a common belief that the word Xmas stems from a secular attempt to remove the religious tradition from Christmas[3] by taking the "Christ" out of "Christmas", but its use dates back to the 16th century.

It doesn't take too much imagination to see that "X" is a somewhat diagonal cross which most recognize as a symbol of Christ and the religion named for him.

There are diagonal crosses recognized in various parts of the world. Perhaps the most common known to Americans is the St. Andrew's cross appearing on both the National Flag of Scotland and incorporated into the Union Jack of the United Kingdom of England, Scotland, Wales, and Northern Ireland. There is also a diagonal red cross appearing there which is the cross of St. Patrick. (Somehow, any symbol of the Welsh Nation was left out as the Welsh are more than used to -- blasted saxons!). Tradition is that St. Andrew, among others, was crucified on such a diagonal cross and the English used diagonal crosses to punish Scottish resistance in their conquest of Scotland. In nations and kingdoms where Christianity is recognized as an official state religion, unlike the United States, it should be no surprise to see a cross on a national flag - even if the symbol has become more secular.

And need I remind you that the Puritan fathers and mothers, continuing with some modern Christian groups, did not celebrate at Christmas considering it a pagan holiday which it basically is adapted from mid-winter solstice celebrations to sanctify them into medieval Christian practices. The evergreens, fires, mistletoe, feasting, etc., all come from pre-Christian celebrations of life to which I certainly have no objection.

Oh, and I like saying "Happy Christmas!" to people. Besides it being what they say in English-speaking Britain (well, pretty much all of it), it makes overly sensitive Christmas warriors confused. When I begin with "Happy" instead of "Merry" they start to get their dander all up for some unChristian-like verbal sword thrust, then I end it with "Christmas" so they realize I'm all "holy night."

. . . Except for those who are already on to me toying with them.

And isn't "Mary Christmas" the name of Santa's wife anyway? Or maybe his "special" friend?
(Worth staying for the part she apparently got from Cheech & Chong about Santa's magic "doost.")
at 5:00 PM