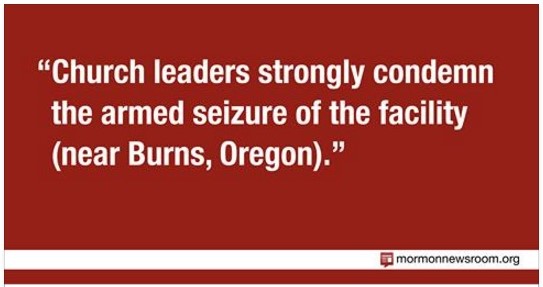 As President Uchtdorf once said, "Stop it!"

I don't want to hear any more allegedly scriptural arguments for extreme right-wing political views. That includes the teachings of W. Cleon Skousen. It includes the political preachings of past leaders of the LDS Church that in any way be used to justify resistance to the Constitutionally established government of the United States. That includes the false teachings of lobbyist/legislator Ken Ivory arguing that the states have a valid and legal claim to the federal public lands, they do not. That includes the erroneous idea of posse comitatus a bizarre reading of medieval Anglo-Saxon law of England (not the US!) that the county is the supreme authority of the people. It includes any crazy idea that the Fourteenth Amendment somehow created a class of citizens different than the alleged white Christian founders of the United States. I don't want to hear any more offensive argument that somehow our Constitutionally elected President, Barack Obama, is not legitimate because of where he was allegedly born or who his parents were.

It has appalled me that members of my own religious faith have held and promoted such erroneous ideas - not just because they threaten my livelihood as a public servant employed by the U.S. Department of the Interior, and not because my life may be threatened by those who would promote violence against law-abiding officers of the United States performing our Constitutional duties. It is because it breaks my heart and my soul to see such people misuse the sacred scriptures and doctrines of my church to such ridiculous purposes.

The full statement of the Church of Jesus Christ of Latter-day Saints follows:


Some have accused me of being a little flippant or disrespectful regarding the armed protesters currently trespassing at the Malheur National Wildlife Refuge. I respect them as humans prone to error. I allow room for them to repent. I do not want to see them hurt or to harm or promote harm to others as I said in yesterday's post.

I do believe they are absolutely and fundamentally wrong in their political theories and the use of supposed teachings of the LDS Church to support them. That offends me greatly. They are objects of pity and some appropriate ridicule in a humorous vein until they realize how foolish they are and hopefully without violence or further promotion of ridiculous ideas, they will go home and live in peace and stop threatening the Constitutional laws and order of the United States of America.

Change things as you can by the vote or laws upheld by the courts (which hasn't gone very well and likely will not go at all well for the silly laws proposed by lobbyist/legislator Ken Ivory). But do not threaten me or my government of, by, and for the People, or its Constitution with violence.

As a final word, not all the crazy people at the one-sided stand-off in Oregon are Mormons. Some are just crazy for whatever reason.

_____________
All my caveats are in place that I am not an official spokesperson for the Church of Jesus Christ of Latter-day Saints or the U.S. Department of the Interior, my employer. These are MY views!
at 5:17 PM