Nevada and the Jolly Welshmen

Maybe Brigham knew the folk song. The Five Welshmen knew it even if it might have been self-deprecating to reference the humorous exploits of the bumbling Sons of Gomer. And the original number is three for the "Jolly Welshmen." So it's interesting that two of our five appear to have stayed in Utah and three seem to have gone to bumble their exploits in the Sierras.

The tune of "The Five Jolly Welshmen" is unknown to me and I don't seem to find it on "YouTube." There is another tune I can't get out of my head that I will now curse you with. I was always fascinated by the opening theme of the TV show "Bonanza" with the map of the Ponderosa Ranch straddling the California/Nevada line bursting into flames for some reason. 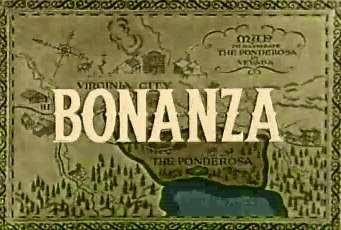 It was the Old West at its finest or at least for a boy who had been on family vacation to Virginia City, Reno, and Lake Tahoe. And I have always loved maps. Here's a version of the fictional Ponderosa map that is at least somewhat properly oriented:


And here's a more correct version from Wikipedia:
Remember, the Ponderosa was fictional. But there was a really important line that doesn't show, the California/Nevada, er, Utah line. Utah??! Oh, yeah!

Brigham Young's dream of the State of Deseret never got any respect in Washington, D.C. The '49ers heading for California gold (discovered by Mormons) and principally, the merchants of San Francisco were much more successful in establishing a State by 1850.

And about that time, John Reese (good Welsh name, there), led a group of Mormons to settle in Carson Valley on the east slope of the Sierras. They also happened to find a few gold flakes in nearby streams. But it wasn't until 1859 after the Utah War, that the mountain of silver known as the Comstock Load boomed. By 1857, Brigham Young had already called back the settlers in Carson Valley and other far-flung areas because of looming threats from the U.S. Government. But they didn't all go. . . .

This now requires the necessity of finding important records in shifting jurisdictions. Let me demonstrate the shift with this wonderful graphic:

The North/South California line was disputed over the years as there was gold and silver on both sides. But US government surveyors eventually got that straightened out.

Now, an even more helpful map on old county jurisdictions in Utah Territory as of 1856:

From 1856-1861, northwestern Nevada was in Utah Territory. While some of the histories I read online indicate that general lawlessness was the form of government once the Mormons left in 1857, there may still be some records.

And Utah Division of Archives and Records Service comes through with this on Carson County, Utah!

This series contains microfilm of various records from Carson County, along with indexes for those records. These materials were given to the Utah State Archives by the Nevada Archives. Carson County was initially organized in 1855 as part of Utah Territory; it became part of Nevada Territory in 1861. The volumes include record books, dockets, an account book, minute books, and their related indexes.


Now the problem being as State Archives Office has such limited hours, I'm going to have to take some vacation leave to dig out any info that I may need.

AddendumSunday, October 5, 2014I have been to the State Historical Archives for Utah. They are always friendly and helpful there. Unfortunately, the records didn't "pan out." No evidence of Abednego Johns and a marriage to Jane, and no evidence of Eleanor or "Ellen" nor of John Lewis. So, no answers yet to our questions from the 1860 Census for Carson County
at 12:02 PM