Pain In the Neck!

This isn't a plea for sympathy or a chance for whining on my part. We all have challenges. Some are more obvious than others. And we all could use more charity which is best when given to others, not when we're worried about what we're not getting. So I keep trying to do some good in the world.

I just thought it would be fun and maybe educational in between politics, religion, and the general miscellany of life that gets blogged here, to start up an ongoing series of what it's like to have some medical issues.

My sources for information are my doctors & their staffs, mostly at the University of Utah Medical System. I think they came up with at least one artificial heart, so they are world-renowned and really good. When I do my searches on the web I stick to NIH.gov, other University websites, the Mayo Clinic, UK, Australian, New Zealand, and Canadian government web sites because of their good, national health. I stay away from the anecdotal medical forum communities (why I don't want to invite one here), herbal remedies, and chiropractors - to each his own.

My dear migraines have been with me since adulthood. At least I think they're migraines. Doctors keep telling me they are. They start with a tension or cluster headaches, often on the right side of my head. In recent years I can get them out of really painful pressure in my neck or back of the head. I've dealt with them over the years with various treatments and only thought I was going to die a few times. My wife took me to the emergency room a couple of times, but a large dose of ibuprofen, and priesthood blessings, usually can gave me relief before I get through any emergency waiting room to get the sumatriptan injections.

About six months ago I started to have weird periods lasting a few hours at a time with confusion, brain-fog, disorientation, and dizziness. There was a little bit of nausea. It seemed like all the symptoms of a classic migraine minus the thinking-I'm-going-to-die pain. My internet searches came up with the "silent migraine." The whole cognitive dysfunction business really bothered me so I called to get an appointment with a neurologist. It takes about 3-4 months to get in.

The University of Utah has Neurology specialists. Interestingly located in the building that used to house the U.S. Bureau of Mines, a now defunct agency that was under the Department of the Interior. I've done some work for them in the past with one of our secretaries in the old days mistyping an address to the "Bureau of Minds." Oh, yes. I'm swimming in the irony. 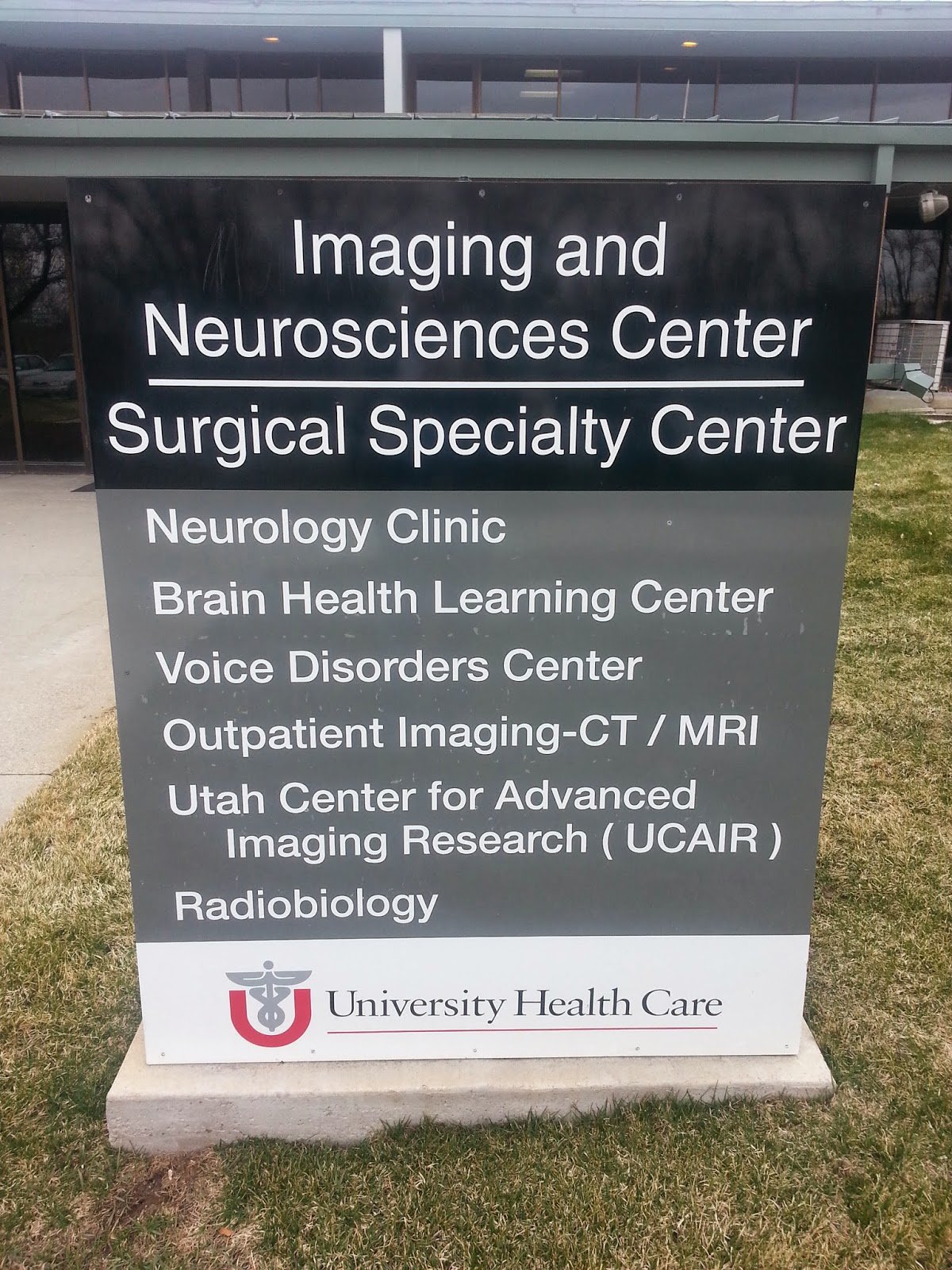 I had an exam by a Nurse Practitioner who was very thorough in going threw my symptoms and giving me all those knee-tapping reflex tests. I walked a fairly straight line and all. In her final summation, she said, "I can already conclude that you are not neurologically intact!" Complementing her on her beside manner - no, actually I raised an alarm, "Whaaaaat?! And they scheduled an MRI.

I had to wait a few weeks for that and when the time came, I did my Zen-like zoning out attempting to think of the ephemeral "nothing" and the technician complemented me on how still I was. I knew there would be humming so I opted for earplugs declining the music ear buds so I could meditate on the experience. It was musical. It wasn't a steady drone that could have driven me crazy. It was a series of occasional whumps and varying tones, rhythms and pitches that only added to my search for nirvana.

Anxiously awaiting the results, they finally called and got through my cell (we have recently switched our land-line for only outgoing calls and I have this new issue with telework and my office calls being forwarded to my cell - technology can be a cumbersome burden). Anyway, they told me that my brain was NORMAL!! How many people have a certificate that says that!

Unfortunately, that was the good news part. They also said that I had some spinal stenosis or pressure on the spinal cord. ACK! They asked if I wanted a copy of the MRI report and I said, "Oh, yeah!" I don't get any pictures with it but maybe I can finagle one later just so I can frame a picture of my NORMAL brain.

So here's the diagnoses of concern:


Multilevel degenerative changes within the cervical spine, greatest at C5-C6 where there is moderate thecal sac stenosis and severe bilateral neural foraminal narrowing.

What the heck does that mean?! Well, that is why I've been skimming through NIH abstracts and all the other stuff on the web. Here is my current interpretation:


There are problems all along the spine in my neck (that's the "cervical" part. I was a little worried at first that they had found a cervix.) The "C" numbers refer to the vertebrae in the neck counting down from the top. There is some pressure on the spinal canal and apparently severe constriction on the base nerves that go out from the spine. 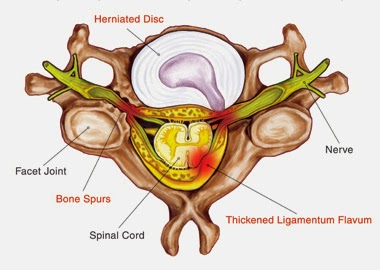 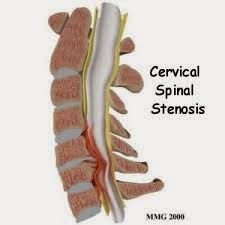 Yikes. The main this is that this is principally degenerative arthritic problems and not from injury and not so much a bulging disk problem. The main thing in that "severe" constriction of base nerves is bone growth and spurs narrowing the gap they are supposed to go through. No chiropractor can help with that. I'm not even sure cortisone can. I think I will sooner or later have an operation to scrape out bone from those channels to relieve that pressure. They will also have to treat the "moderate" pressure on the spinal canal itself. On the phone they indicated that I am likely to get a cortisone shot on my next visit (next Thursday) but that will only address non-bone swelling of things.

My reading went beyond the interpretation of the medical jargon to check on the symptoms. Oh, my heck! It was the story of my life, at least for the last twelve or so years. The pressure is affecting my upper limbs and back into my neck and head. The head, of course, gets the headaches and some other incidents of depression and anxiety. Headaches and depression seem to circle around each other with no clear conclusion as to which may cause what. But the spinal and neural constrictions can effect both.

And then there are the arm and hand problems. Since the days of my serious running I have had tingling in my arms and loss of sensation. Some of that may be part of the extreme conditions it takes to finish a marathon or other long run. But I have had sporadic problems over the years even consulting with an orthopedic specialist about possible carpal tunnel and other syndromes. I wore a wrist brace on one or the other wrist now and then. These are all symptoms of cervical stenosis! (If it were further down in my spine, I would be having leg problems like the sufferers from sciatic nerve pain.)

I'm fortunate that I haven't had a lot of pain except for the killer headaches and the occasional bouts of depression and anxiety that include real, physical pain (believe me!) I've been on some prescribed meds off and on, and currently on, for a few years now for headache, depression, and anxiety. Interestingly, the woman who gave my neurological exam said those were the same meds they would be proscribing for the neurological issues. This is all related!

Of most concern to me is the mental cognition issues - also a potential symptom of spinal compression. I just have not been myself the past while on a declining slope for a few years with more serious occurrences the past few months. I can still do all the things I need to at work, home, church, etc. But sometimes it requires an inordinate amount of effort for the simplest things - typing, dressing, balancing the checkbook (OK, I've never been the best at that, but it has still gotten much worse).

It's like episodic dyslexia of some sort. All my knowledge gained over the years is still in there. I understand it. But on occasion I have a difficult time concentrating to get it out. My typing and even verbal skills have become a little error-prone. And there are the rare occasions of complete fog in the brain. So far, nothing serious has happened. But I did lose two or three jackets this winter which I haven't done since grade school. And I've gone to meetings at the wrong time, usually earlier (like a whole month early for one medical appointment). Scheduling conference calls with DC two hours ahead and Phoenix now with Pacific time one hour behind has become a nightmare.

So, I think I need my vertebrae scraped out, the sooner the better.

They will surely try some conservative approaches first, the cortisone, physical therapy, etc. But if this is degenerative arthritis, it will not get better on its own. I'll know more and blog it as I can after my next consultations this Wed. & Thurs.

Honestly, I do consider this an amazing adventure! I'm not worried. I'm quite relieved, actually, and that they found something to work on. It's not just in my head (so to speak).

So, I close out for now with some of my favorite lines from the Who (promising that once I get a cure, I will not go on tour or start up a Holiday Camp!):


A vague haze of delirium

Creeps up on me

All at once a tall stranger

He's dressed in a silver-sparked

And his golden beard flows

Nearly down to the ground


Sickness can surely take the mind

Come on the amazing journey

And learn all you should know


His eyes are the eyes

That transmit all they know

That he is your leader

And he is your guide

On the amazing journey together you'll ride!