Dreamers of the Not So Impossible 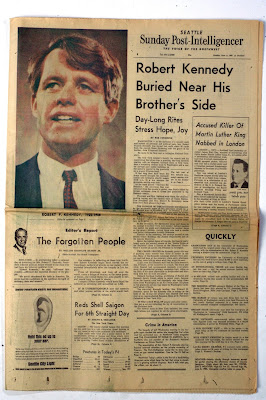 My family were not fans of the Kennedys. Even my Democratic paternal grandparents didn't like them for  some reason. But I won't forget when Bobby Kennedy was killed.

It happened late at night after little kids were all in bed. The next morning on the way to school, we were all talking about it. There was a lot of fascination with the fact that football star Rosey Grier had jumped on the killer and taken the gun away from him.

Miss Taylor came in for the second half of the school year. I have no idea why the teachers switched off. If I knew at the time, this ten-year-old little boy forgot long ago. She was young, maybe a brand-new teacher. And it was 1968.

At the end of one school day, and I'm not sure which day after his death as school would soon be out for the summer and that was our main interest, Miss Taylor used her serious voice to tell the class that she had a tribute to Senator Kennedy. She said something about this being important. She held the sheet music and read the lyrics:

And I know if I'll only be true
To this glorious quest
That my heart will lie peaceful and calm
When I'm laid to my rest
And the world will be better for this
That one man, scorned and covered with scars
Still strove with his last ounce of courage
To reach the unreachable star

She did tear up a bit. She finished reading the lyrics and dismissed us for the day. It stoked my already developing idealistic soul.

Ted Kennedy quoted his brother at the funeral service:


"Some men see things as they are and say why. I dream things that never were and say why not." -Robert F. Kennedy

This all came back to me as I was watching Man of La Mancha recently. Peter O'Toole fit the role well even if he couldn't sing. Sophia Loren didn't sing so well either but I don't think that's why they hired her. Anyway, Bobby had his faults, but my teary-eyed, young, idealistic schoolteacher in 1968 had me convinced that he was an idealist too. We idealists are not without our flaws nor do we ignore reality. As the playwright put in the words of Cervantes:


"I've been a soldier and a slave. I've seen my comrades fall in battle or die more slowly under the lash in Africa. I've held them in my arms at the final moment. These were men who saw life as it is, yet they died despairing. No glory, no brave last words, only their eyes, filled with confusion, questioning "Why?" I don't think they were wondering why they were dying, but why they had ever lived. When life itself seems lunatic, who knows where madness lies? To surrender dreams - -this may be madness; to seek treasure where there is only trash. Too much sanity may be madness! But maddest of all - -to see life as it is and not as it should be." -Dale Wasserman, as spoken by Cervantes in Man of La Mancha.

We just ask, why not sacrifice all trying to make reality a little better? That is our life-long Quest.
at 9:05 PM