It's no wonder my parents had to turn off the TV when I screamed. 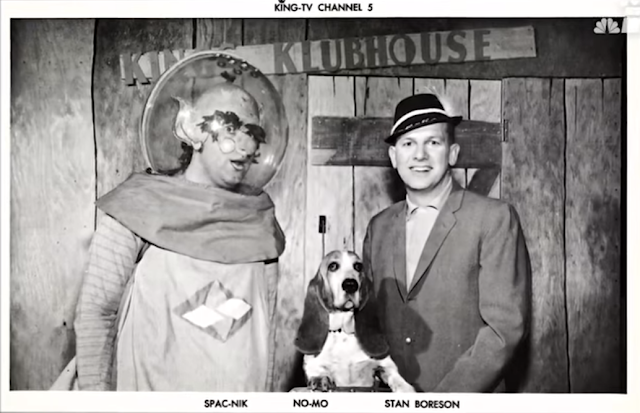 And at 62 years of age, the space guy is still a bit disturbing. At age five, he was horrifying!

Seattle in 1962 was all about the World's Fair and the 21st Century. The Space Needle was to be our future home just like the Jetson's home on TV. Local clowns got in the act. My internet serendipity (or evil curse) landed on "Spac-nik" whom I also found named as "Space-Nik" and "Space Nick." He was Jerry Sando, a frequent performer on Stan Boreson's Klubhouse from KING TV better known as Seattle TV's Bozo the Clown. (I preferred the Safeway Clown whose name was "Yawefas." I was so proud when I figured that out!)

Stan Boreson was my favorite for a while until my allegiance shifted to J.P. Patches. Stan had a bit of national success. Some of his novelty songs were played on Dr Demento's radio show in the 70s. He also made it on Lawrence Welk:


Now days, I still can find humor in classic TV. My horror is not so much from clowns except for the creeping fascist type in our White House and the endless wars in the oil regions of the Near East. Give me Slo Mo Shun!
at 2:15 PM