Mission Update - Baptists at the Roundabout


Last week, I arrived. They gave me administrator access to our Early Missionaries Database and I flew my wings.

Well, there's one more missionary added. So don't get too excited.

It is a challenge keeping up with the Joneses. I mean, sorting out all the Joneses which is the most common surname in Wales if don't you know already. It also helps explain why David Bevan Jones (1807-1863) preferred to use his bardic name - the Welsh version of a nom de plume - of Dewi Elfed. I knew his story and wondered why he was missing from our database and didn't seem to show up on any Church record in Utah.

Dewi was a Baptist Minister in Aberaman, Aberdare one valley over from from the Industrial and Mormon center of Wales in Merthyr Tydfil. When he and a few of his congregation were baptized into the Church of Jesus Christ of Latter-day Saints in 1851, he turned his chapel over to then President of the Welsh Mission, William Philips. The Baptists didn't appreciate that. The Baptist organization went to court and won an order affirming their ownership. Then, to take possession, a few Baptist Ministers and maybe a "tough" or two went to the Chapel and found it barred against them. Breaking in a window, they chased Dewi Elfed and another Mormon Elder around the interior of the Chapel until the Mormons were caught and thrown out the door. Having lost his Chapel, Dewi Elfed continued his preaching elsewhere as an Elder of the Latter-day Saints.

And there was a lot of name confusion in the records. On the 1860 ship manifest found at Saints by Sea (formerly Mormon Migration): 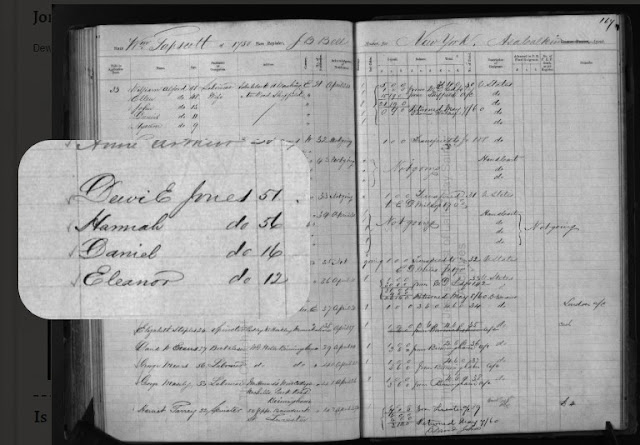 Dewi's name was properly indexed as Dewi even if it does look a little like "David." His wife, Hannah, is there even if she was known as "Anna" in Wales, a common alternate spelling. The children all matched up with the British Census of 1851. For reasons unknown, Dewi was listed as "Daniel Jones" on the Pioneer Database (formerly Mormon Pioneer Overland Travel).

Here's the thing. I got that fixed.

They told us in initial missionary training on FamilySearch.org that we weren't supposed to fix anybody's ancestor's page. Dewi didn't have any family working on his page. There was only a bare-bones creation by Family Search without any sources or much information. It was probably because he died within a year of his 1862 arrival in Utah and his children do not seem to have any descendants or at least not any actively participating in Family Search. So I added the information and sources for him and his family.

It was really bothering me that I might be linking to a Family Search page on the Missionary Database that I had created. So I came clean. Doing delivery duty as missionaries must behind the scenes at the Church History Library, not knowing before hand if it was serendipity or inspired, I had a conversation with one of the professional historians working on the Pioneer Database.

Mentioning that I might have found some corrections for a family of Pioneers, she asked the name and said she would do it right there at that moment. I told her a little about Dewi, Hannah, and the children. She started entering corrected info. I wheeled the cart away realizing that she would be looking at his FamilySearch page and see all the sources with my name as the contributor. I wheeled the cart back and told her that I had done all that research. She thought it was great and said that she does it when nobody is working on a pioneer that she finds.

Whew! It was all good!

My boasting is in the History of the Restored Church, not in my meager efforts. It is very gratifying, however, to have Dewi's Missionary, Pioneer, and FamilySearch pages all fixed up and properly sourced.
at 8:46 AM